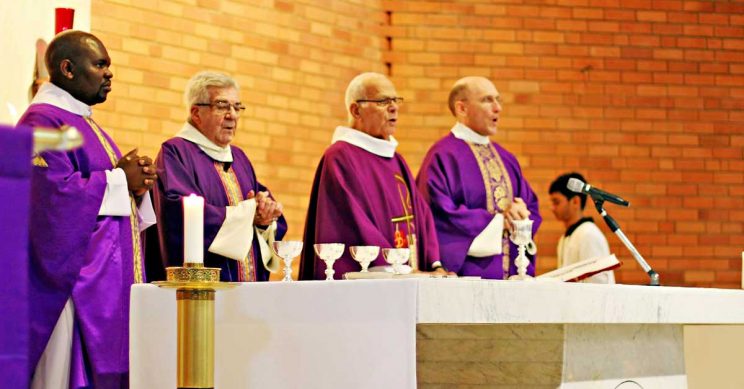 The 60th anniversary of ordination of Durban’s Mgr Paul Nadal was an occasion of celebration and looking back at a distinguished life of service, and for the priest to thank those who had supported him.

The former vicar-general of the Durban archdiocese celebrated his diamond jubilee at St Joseph’s church in Morningside at the invitation of parish priest Fr Brett Williams.

“He had been baptised in the old St Joseph’s church, so I thought this would be a great way to celebrate the anniversary,” Fr Williams explained.

Mgr Nadal’s only request was that he wanted to celebrate the day with his lay friends and family, and that the focus was to be on him thanking them for their support and care over the years.

“Mgr Nadal is the most senior diocesan priest in our archdiocese, and he has been a dedicated and faithful priest for all of those years,” said Fr Williams.

“As a priest it was wonderful for me to celebrate him and to be able to share and enjoy this milestone with him.”

Journalist and Church activist Sydney Duval, a friend of Mgr Nadal since their seminary days, described the jubilee celebration as an “agape of parish, family and friends”.

“The celebration will be remembered for the generous hosting by Fr Williams, for the stirring and humorous tribute by Fr Lavoipierre and the voice of Cecilia Dobes filling the church and its magnificent mosaics with her thrilling version of Panis Angelicus,” he said.

Mr Duval recalled some of the highlights of Mgr Nadal’s priestly ministry: from his very early days of being sent to Montebello to learn Zulu, to current times with both serving on the Historical Commission of the Cause for the Beatification of Abbot Franz Pfanner, founder of Mariannhill.

“An important signpost was Mgr Paul’s founding of Khanyisa Pastoral and Catechetical Institute at Mariannhill, followed by more studies and degrees and a doctorate in philosophy for his dissertation ‘The Concept of Transcendence in Marxist Philosophy’ from a Christian perspective,” Mr Duval said.

“Then came the new thrust in catechesis when Mgr Nadal collaborated with Sr Theodula Müller CPS to produce the ‘People of God’ series to echo the realities of the South African situation.”

Mr Duval recalled a day in 1992 when Mgr Nadal appeared at a bishops’ plenary session to introduce RENEW as a way of implementing the Pastoral Plan.

“He spoke with a passion that lit a fire in many of us that day. Here was something new, something heartening, and something inviting to grab hold of,” Mr Duval noted.

“Then he was with us in Cape Town’s Good Hope Centre when 10000 local Catholics illuminated that vast structure with their candles and their music and their faith to launch their RENEW,” he said.

“Supporting the Pastoral Plan, of being ‘a community serving humanity’, has been an ongoing part of Mgr Nadal’s ministry, even to this day.”