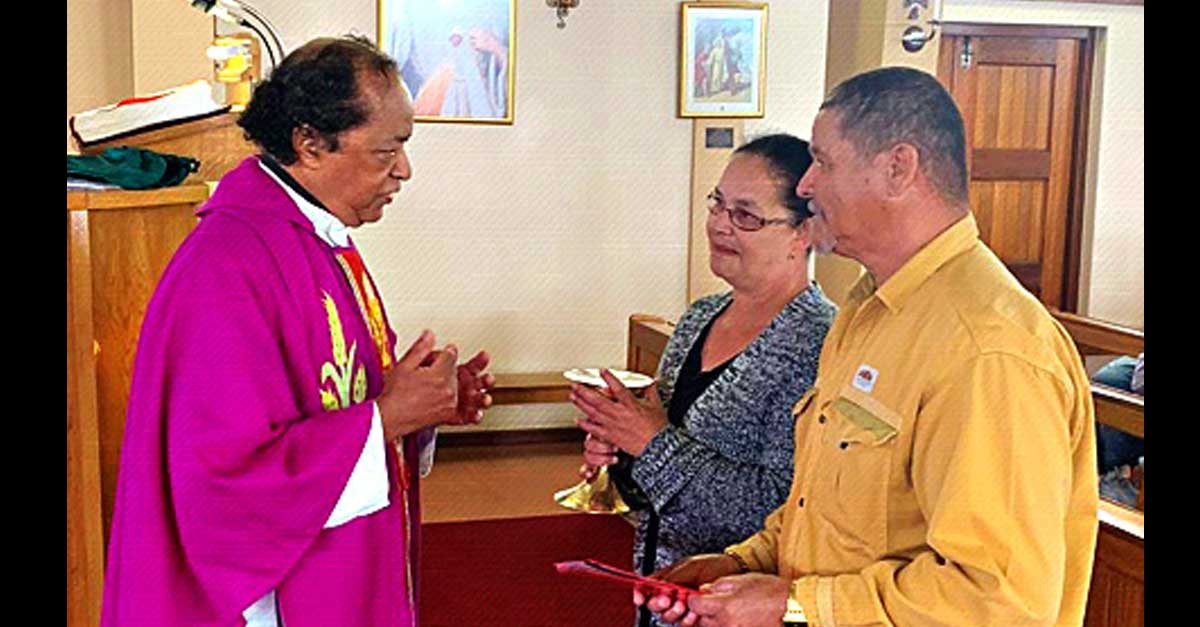 Fr Gerard Masters hands the gift of a chalice to Delores and Leonard van der Schyff of St Anne’s parish in Steenberg, Cape Town. The Van der Schyffs accepted the chalice, passed on by Fr Masters from an elderly priest in the US, on behalf of their son Fr Alfredo van der Schyff, who was unable to be at the Mass.

A Cape Town priest who spent many years in the United States has passed on a chalice given to him by an older cleric to a young priest, who he hopes will one day pass it on to the next generation.

Fr Gerard Masters received the chalice from Fr Leo Spodnik, a 97- year-old retired priest of the US archdiocese of Hartford in Connecticut. Fr Spodnik had received the chalice on his ordination to the priesthood on May 27, 1948, from the Slovak-American community, which he went on to serve for many decades.

Fr Masters decided to present the chalice to Fr Alfredo van der Schyff, “since he is from the parish of St Anne’s in Steenberg where I served many years ago”.

Fr Van der Schyff was ordained to the priesthood in August 2019.

Due to his pastoral duties, he could not personally receive the chalice at Mass in St Anne’s church, so Fr Masters presented the chalice to the young priest’s parents, Leonard and Delores van der Schyff.

“The fact that Fr Masters choose me really humbled me but also made me realise the connection we each have as priests, being part of the one priesthood of Jesus Christ,” the priest told The Southern Cross.

“This new tradition of handing on a chalice to a newly-ordained priest, I believe, is a beautiful gesture,” Fr Van der Schyff said.

“It reminds us of priests who have gone before us and the many sacrifices they have made, especially through the example of their lives, living out this symbol of the chalice being conformed to Jesus Christ who sheds his blood for the salvation of the world and who offers his body to be broken for us,” he said.

“I pray that by God’s grace I too, one day as a retired priest, may hand on the chalice to a newly-ordained priest,” Fr Van der Schyff said.

The Stigmatines’ Key Role In Pretoria