The Amazing Life of Pauline Jaricot 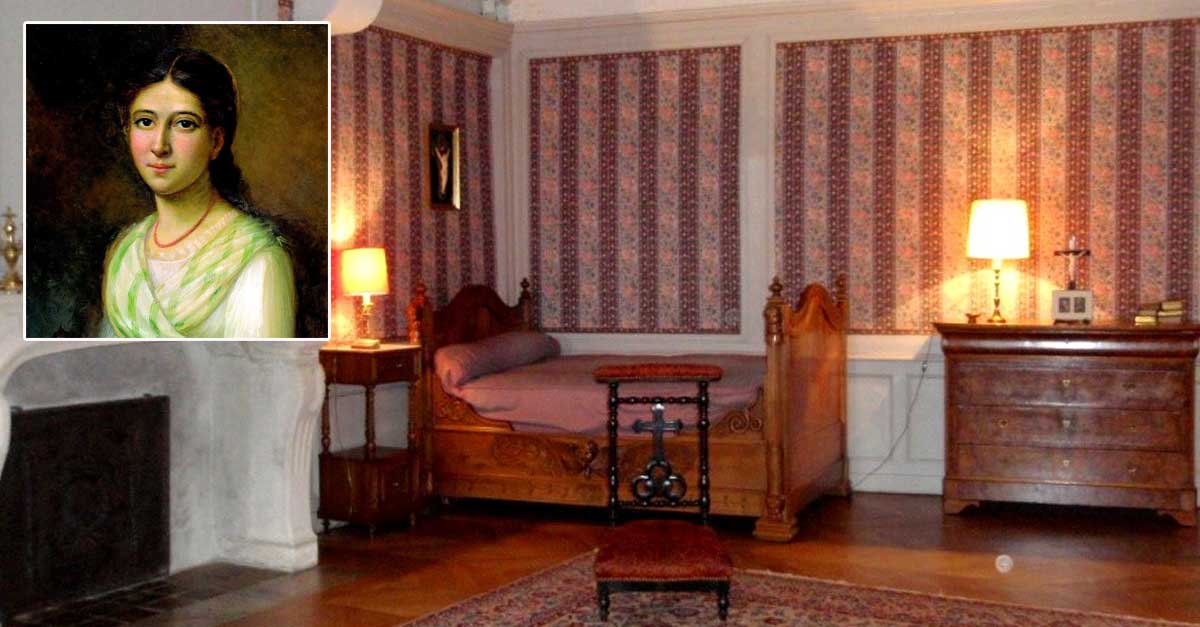 The remarkable Pauline Jaricot (1799-1862) was born to live in high society but gave all that up to evangelise, founding organisations that have survived to this day. In the portrait she was still a young woman.  Pauline Jaricot’s bedroom in Lorette, the house in Lyon she founded. It can still be visited today. (Photo: La Maison de Lorette)

In 19th-century France, a lay woman made a big difference in evangelisation and missionary work. In a two-part series, COLLEEN CONSTABLE looks at the life of Pauline Jaricot.

The remarkable life of Pauline Marie Jaricot, founder of the Society of the Propagation of the Faith and the Association of the Living Rosary, came to an end at the age of 62 on January 9, 1862.

It was a life that saw this lay woman—a friend of both St John Vianney and Pope Gregory XVI—be miraculously healed through the intercession of St Philomena, and then exhaust all her wealth in an effort to mission to the poor.

Pauline Jaricot, who was declared venerable in 1963, was born in Lyon a decade after the French Revolution, on July 22, 1799. She was the youngest of seven children of Antoine and Jeanne Jaricot.

Antoine was the owner of a silk factory, so Pauline was expected to live her life in the bourgeoisie. So at 15 she was made her debut in Lyon’s social life of the city.

A sermon on vanity made her question that scene. More about that later.

At the age of 18, while at prayer, she had a vision of two lamps — one had no oil; the other was overflowing, and from its abundance, the full lamp poured oil into the empty one. She understood that it was her call to work for missionaries.

Her vocation took shape in France at a time when workers were subjected to social injustice and society experienced spiritual decay.

Today Pauline is known as the founder, at only 23 years old, of the Society of the Propagation of the Faith as well as of the Association of the Living Rosary.

A century after the founding of the former, Pope Pius XI elevated its status to a pontifical society, and thus a universal mission under the direction of the Holy Father.

Pauline founded the Association of the Living Rosary in 1826 because she wanted to evangelise through prayer, reaching all classes in society and spreading the Gospel through meditation on the mysteries of the rosary.

Pauline saw the groups of the Living Rosary as a large spiritual family.

“What a blessing to be joined to such good souls. How beautiful is this charity that makes [with] a great number of persons different by their age and social conditions a single family whose mother is Mary,” she said.

In 1832 Pauline bought an exceptional property and gardens on the hillsides of Lyon. She named it Lorette House—in memory of her pilgrimage to Loreto in Italy—and built the St Philomena chapel and a staircase for pilgrims to reach the top of the hill easily.

She continued to spread the Living Rosary from Lorette House, and managed a repository selling religious items, books and crucifixes. She opened the doors of Lorette House to the poor, provided for their needs, and also welcomed clergy and missionaries.

Today Lorette House is the property of the French Oeuvres Pontificates Missionaries.

While Pauline’s call to mission was authentic, her initial life was characterised by internal struggles.

It is said that she turned from God in her adolescence. She was inconsistent in her devotion. She was torn between moments of intense prayer and her participation in the “dashing social life of the silk world”.

Her desire to spend long periods in church before the Blessed Sacrament, praying through the intercession of Mary, was equally challenged by her participation in social events.

Pauline was popular and dressed elegantly. She was admired and courted by young men. She fantasised about the romantic possibility of an idyllic marriage.

In today’s world one would describe her as a young upcoming socialite.

At age 15 Pauline encountered her first challenge in life: she fell and damaged her nervous system. The fall left her semi-paralysed, and her speech affected.

Doctors were unsuccessful in their attempts to treat her.

At the unexpected death of her eldest brother, Narcisse, her condition worsened. Then her mother became ill and died. Out of concern for Pauline’s health, the family initially didn’t inform Pauline about her mother’s death.

Pauline’s local parish priest encouraged her to resume her devotion. She asked for the sacrament of reconciliation and received the Eucharist. From that moment she recovered the use of her limbs.

As mentioned above, at the age of 17 Pauline was deeply touched by a homily about vanity. After hearing it, she made a general confession, went home and burned her romantic novels and songs, and set her jewellery aside.

She pledged never to look into the mirror again or to wear beautiful clothes. She decided to devote her life to serving the sick and the poor, especially those of her city in the Hospital of Incurables.

Pauline’s desire was to love without measure, without end, and to serve the Lord. She visited the Virgin Mary shrine on Lyon’s Mount Fourvière and made a vow of chastity, while remaining a laywoman.

She also understood that she did not have a calling to the religious vocation.

Pauline struggled with anger and pride throughout her life. She felt that anger caused her rage.

To combat these weaknesses, she said: “In order to keep silence, I had to put in my mouth whatever was close at hand. My passions weakened to the degree I combated them.”

About her struggles with vanity, she said: “I would never have been able to cure myself of vanity if I had not guarded myself carefully.”

At age 19 her prayer-life and devotion intensified. She became part of the Association of the Sacred Hearts of Jesus and Mary.

During this time her brother Phileas, who was studying at a seminary in Paris, asked Pauline to raise funds for the Paris Foreign Missions Society, which wanted to send priests to Asia. Pauline’s creative mind changed the history of fundraising in the Church.

Her innovative idea of groups and group leadership aligned to a decimal system of 10s, 100s and 1000s took shape. The strategy was simple: prayer and an individual network of personal relationships. The group leaders of each system collected funds from the groups every week. Pauline also managed her own group of 100s.

The idea gave birth to the Society of the Propagation of the Faith which became a worldwide brand.

All the time, Pauline’s spiritual life grew: she was a daily communicant and prayed for the conversion of sinners and the evangelisation of the world. She had a devotion to the Blessed Sacrament and meditated before the tabernacle.

She became a spiritual writer and anonymously published the insightful treatise Infinite Love in the Divine Eucharist.

Pauline embraced forgiveness and peace as key pillars of her spirituality. She entered a phase of spiritual renewal. At a large family gathering she asked forgiveness for the worldly inclinations she had often shown.

She closed the book on her past, felt liberated and renewed and undertook more works of charity.

Pauline visited the poor and dressed like them. She treated them with dignity and respect—they were important guests.

She assisted young girls who were needy and those who were at risk. She found employment for them in her brother’s silk factory, while encouraging their piety.

In response to the spiritual decay caused by the French Revolution, she founded the Women of Reparation, or Rèparatrices. Their reparation was to promote devotion to the Blessed Sacrament and to the Sacred Heart of Jesus.

In 1831 Pauline founded the Daughters of Mary, a group of prayerful lay women who lived and prayed together at Lorette House.

By the time of Pauline’s death in 1862, only three members of the Daughters of Mary remained with her.

When Pauline’s financial fortunes had changed later in her life, some of her companions left to join other congregations.

After her death, the three loyal members of the Daughters of Mary had to leave Lorette House and settle in a small flat while still helping the poor and promoting the Living Rosary until they died.

Colleen Constable writes from Pretoria. In part 2 next week, she explains how Pauline Jaricot defied a pope’s expectation by being miraculously cured, how Pauline handled betrayal and poverty, and what lessons her life holds for us today.