Church Gears Up For 30th Anniversary Of Daswa Murder 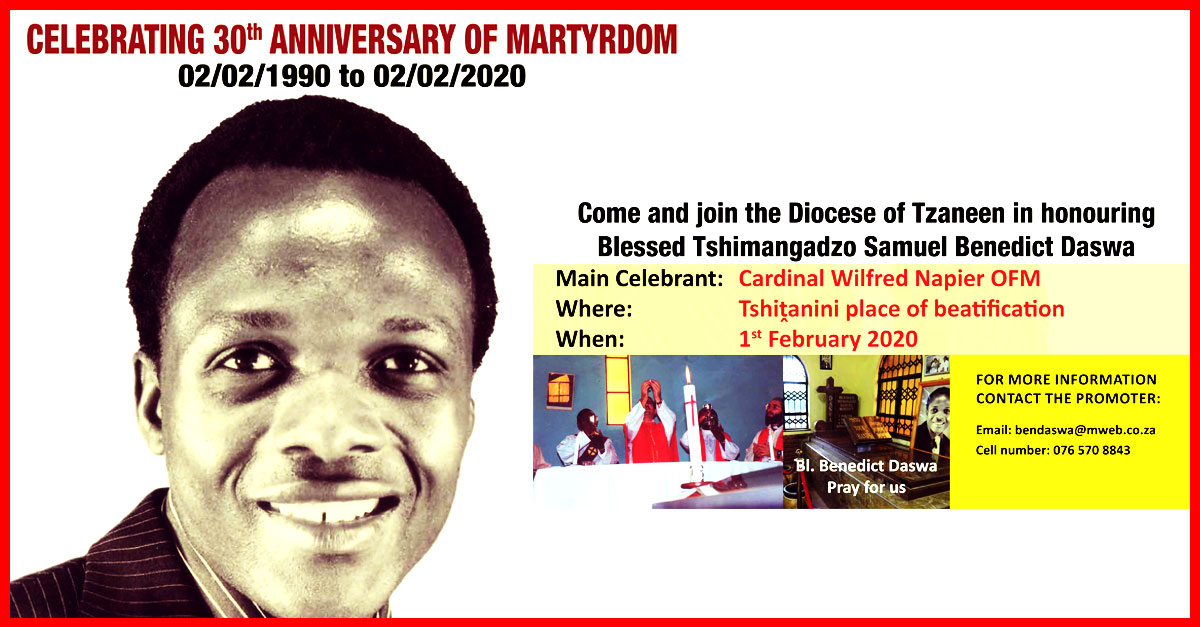 This year’s feast of Bl Benedict Daswa will mark the 30th anniversary of his martyrdom.

The celebrations for the February 1 feast will this year run under the Vatican-approved theme “The 30th Anniversary of Martyrdom (Pearl Jubilee Year of Martyrdom)”.

Bl Benedict Tshimangadzo Daswa was murdered by a mob on February 2, 1990 — the day on which President FW de Klerk unbanned the African National Congress and other liberation movements.

Bl Daswa, a 43-year-old teacher, was martyred for his refusal to participate in a witch hunt.

Before the feast day, a novena will be prayed from  January 23-31.

People throughout the region are encouraged to pray for the favours and graces they need during these nine days. They can use the Daswa novena booklet which is available for download in various languages from the official Benedict Daswa website: www.benedictdaswa.org.za.

The booklet is also available in print from the Daswa office in the diocese of Tzaneen, and from Nweli church, where Bl Daswa is entombed.

Also available online and through SACBC dioceses are the official “Prayer to Implore Favours” and “Prayer for Canonisation”.

The February 1 feast of Bl Daswa may be celebrated as a memorial in all dioceses and parishes in the Southern African Catholic Bishops’ Conference region.

The celebrations of the feast day will be held at Tshitanini village near Thohoyandou in the diocese of Tzaneen. This is the site of Bl Daswa’s beatification on  September 13, 2015, and where the future shrine and pilgrimage centre will be located.

The liturgical colour is red as Bl Daswa died a martyr.

The Vatican’s Sacred Congregation for Divine Worship has officially approved proper liturgical texts for the celebration of the Eucharist and the Liturgy of the Hours. These texts have been printed by Mariannhill Mission Press and sent to the SACBC dioceses.

The celebrations will begin with a vigil on January 31, from 16:00 to 21:00. The faithful are invited to spend a period of silent adoration, prayer and reflection in the tent at Tshitanini.

On entering the area, people will be encouraged to spend time in silent adoration and prayerful reflection for the examination of their conscience, after which the Blessed Sacrament will be exposed.

Throughout this quiet time, priests will be available for confession.

The exposition will close with the Benediction of the Blessed Sacrament.

The conclusion of the nine days of prayers will also be prayed at the end of the vigil.

On the feast day at Tshiṱanini Village, there will be the veneration of the Bl Daswa’s relics from 6:30 to 8:45.

At 7:30, the nine life stations of Bl Daswa will be observed, followed by the laity leading the Rosary (the Luminous Mysteries), and prayer of the Litany of Bl Daswa—Martyr of Jesus Christ at 8:00.

From 9:00 to 11:00 Cardinal Wilfrid Napier of Durban will preside over the feast day Mass followed by the veneration of the relics of Bl Daswa in procession.

Those who are unable to attend the celebration, are encouraged to celebrate the feast in their parishes.