Does the Bible Support the Use of Images in Devotion? 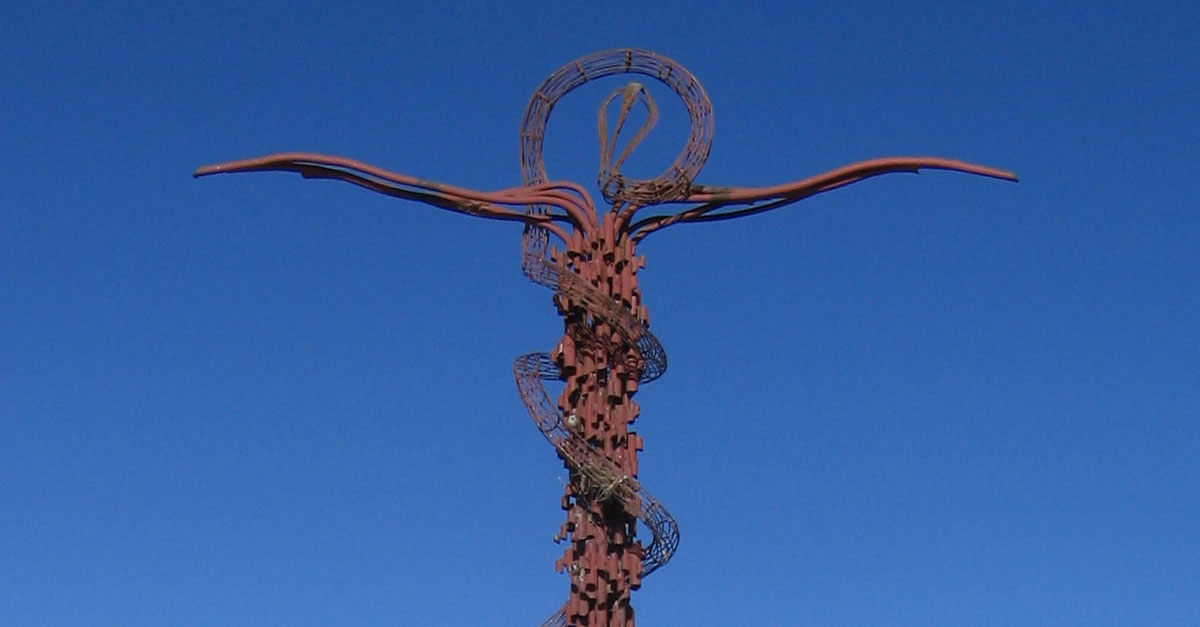 Many people falsely imagine that Catholics “worship” images. In the second article of his two-part series, PROF MICHAEL OGUNU explains that the Catholic veneration of images has biblical support.

The Bible certainly condemns the worship of images. The prophets called such an offence “prostitution”, meaning an act of infidelity to the love God has for man.

But there is evidence in Scripture that God did allow the making of images for religious devotion. I will cite several passages in the Bible to support this fact.

God condemns the sin of idolatry, whether it is in the form of worshipping statues or any other created thing that can become an idol.

In Exodus the Lord forbids the carving of graven images for the purpose of idolatry:

In Deuteronomy, God warns the Israelites against “fashioning an idol to represent any figure, whether it be the form of a man or of a woman” or of other creatures (see 4:15-18).

Joining biblical passages such as these with the divine commandment against idols (see Exodus 20:4); “graven images” in the King James Version, many Christians insist that all statues of religious subjects are forbidden.

We must note, however, that as the rest of the commandment makes clear, God has forbidden only the making of such images with the intention of worshipping them, as the pagans did. He has by no means banned the creation of all religious images.

On the contrary, the Lord actually instructed the Israelites to store those very commandments, carved in stone, within a sacred container (ark) to be decorated with golden images of angelic beings called cherubim (see Exodus 25:10-22).

The late anti-Catholic US theologian Loraine Boettner, in his book Roman Catholicism, made the blanket statement: “God has forbidden the use of images in worship.”

Yet if people were to “search the scriptures” (cf John 5:39), they would find the opposite is true. God forbade the worship of statues, but he did not forbid the religious use of statues. Instead, he actually commanded their use in religious contexts.

People who oppose religious use of statues forget about the many passages where the Lord commands the making of statues.

David gave Solomon the plan “for the altar of incense made of refined gold, and its weight; also his plan for the golden chariot of the cherubim that spread their wings and covered the ark of the covenant of the Lord. All this he made clear by the writing of the hand of the Lord concerning it, all the work to be done according to the plan” (1 Chronicles 28:18-19).

David’s plan for the temple, which the biblical author tells us was “by the writing of the hand of the Lord concerning it all”, included statues of angels.

In obedience to this divinely inspired plan, Solomon built two gigantic, golden statues of cherubim. They are described in some detail in 2 Chronicles 3:10-14.

Ritual use of images

During a plague of serpents sent to punish the Israelites during the exodus, God told Moses to “make [a statue of] a fiery serpent, and set it on a pole; and every one who is bitten, when he sees it shall live”.

So Moses made a bronze serpent, and set it on a pole; and if a serpent bit any man, he would look at the bronze serpent and live” (Numbers 21:8-9).

One had to look at the bronze statue of the serpent to be healed, which shows that statues could be used ritually, not merely as religious decorations.

This is not to say that the image of a fiery serpent healed the people who were bitten. It was God who healed them, but he effected the healing through the use of the fiery serpent.

With all these evidences from the Sacred Scripture, we can safely conclude that God does not condemn the making of images—but he condemns the worship of them.

We need the things of this world to think about things beyond our knowledge. There is nothing wrong in the use of blessed medals, holy pictures, crucifixes, rosaries, if these can help us to lift our minds to God.

Why do Catholic churches, schools, and homes display religious statues and other images? Such images are an aid to remembering and honouring our Lord, his mother, the saints, and the angels. 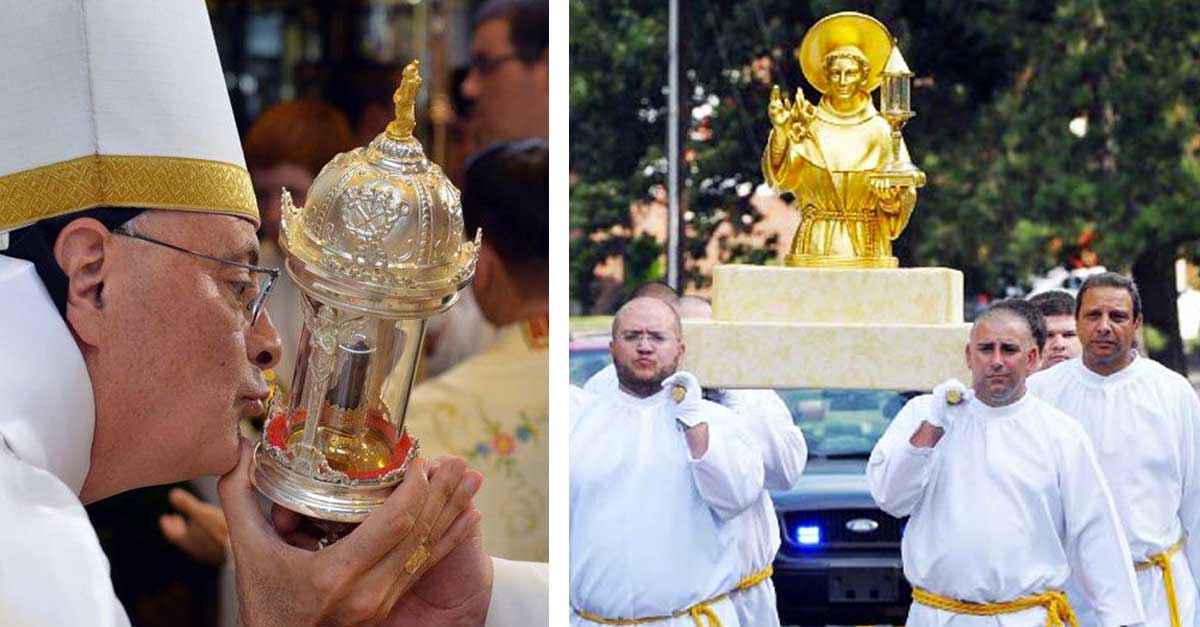 No Catholic who knows anything about the Catholic faith has ever worshipped a religious image.

Even when Catholics kneel to pray before a statue, or burn candles or place flowers before it, they are not worshipping the image. They are simply expressing love and honour for the person represented by the statue.

The crucifix is not the object of our thought when we look at it. It is not the crucifix that the Christians adore; it is Jesus Christ, whose image is engraved on the wood, who is adored.

The crucifix therefore recalls to mind the passion of Jesus and the goodness of God. The Christian must lift his mind beyond the cross to Jesus who has come to save him and the world.

Similarly Ezekiel describes graven (carved) images in the idealised temple he was shown in a vision, for he writes: “On the walls round about in the inner room and [on] the nave were carved likenesses of cherubim” (41:17-18).

Catholic use of images

People who do not know better sometimes say Catholics worship statues. Not only is this untrue, it is even untrue to say that Catholics honour statues.

The difference in bowing

Sometimes anti-Catholics cite Deuteronomy 5:9, where God said concerning idols: “You shall not bow down to them”.

Since many Catholics sometimes bow or kneel in front of statues of Jesus, the Blessed Virgin Mary and other saints, anti-Catholics confuse the legitimate veneration of a sacred image with the sin of idolatry.

Though bowing can be used as a posture in worship, not all bowing is worship.

In Japan, people show respect by bowing in greeting (the equivalent of the Western handshake). Similarly, a person can kneel before a king without worshipping him as a god.

In the same way, a Catholic who may kneel in front of a statue while praying isn’t worshipping the statue or even praying to it.

The Catechism of the Council of Trent (1566) taught that idolatry is committed “by worshipping idols and images as God, or believing that they possess any divinity or virtue entitling them to our worship, by praying to, or reposing confidence in them”.

Thus, the Catholic Church absolutely recognises and condemns the sin of idolatry.

What anti-Catholics fail to recognise is the distinction between thinking a piece of stone or plaster is a god and desiring to visually remember Christ and the saints in heaven by making statues in their honour.

The making and use of religious statues is a thoroughly biblical practice. Those who say otherwise don’t know their Bible.

As clearly stated in the Catechism of the Catholic Church,  the Christian veneration of images is not contrary to the first commandment which proscribes idols. Indeed ‘the honour rendered to an image passes to its prototype’, and ‘whoever venerates an image venerates the person portrayed in it’ (The Council of Nicaea 11).

“The honour paid to sacred images is a ‘respectful veneration’, not the adoration due to God alone.”