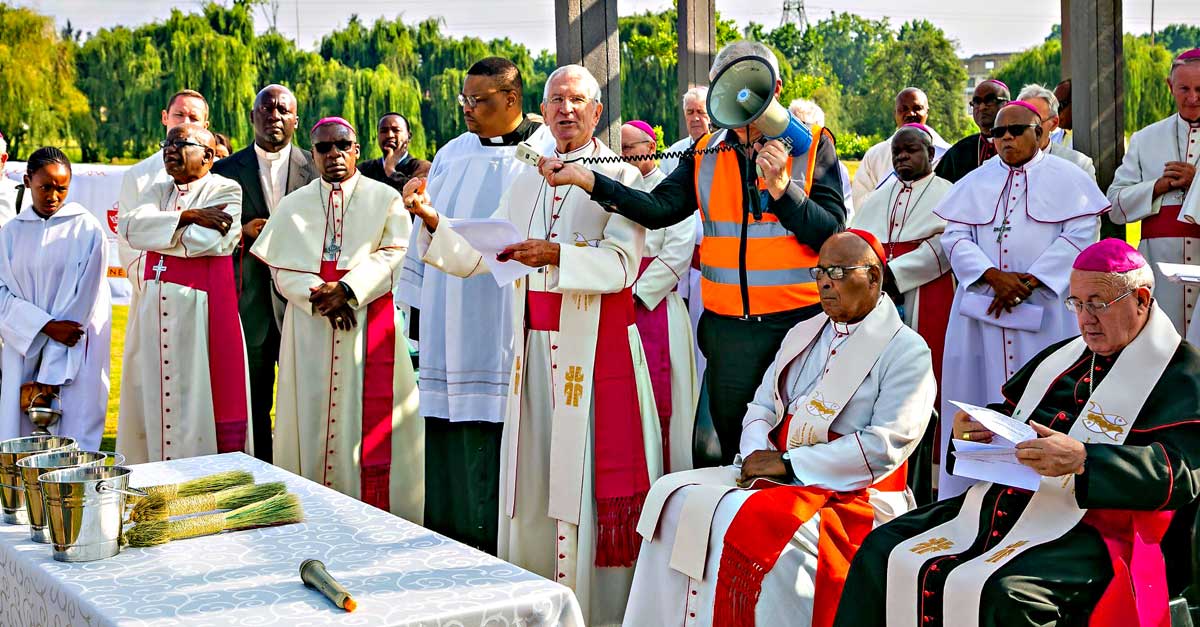 Bishop Kevin Dowling of Rustenburg addresses the faithful on the new Pastoral Plan before the procession in Soweto as bishops listen. (Photo: Seldon Reddiar)

By Daluxolo Moloantoa, with additional reporting by Selby Makgotho – The core message of the new Pastoral Plan is a call to action. “We are called to be disciples of goodwill and at the same time live out our faith in action,” according to Bishop Kevin Dowling of Rustenburg.

Bishop Dowling addressed crowds taking part in a 2km pilgrimage procession in Soweto from Mshenguville Park to Regina Mundi church in Moroka, where the Pastoral Plan was launched.

The bishops used the march to highlight the significance of the Pastoral Plan, titled “Evangelising Community, Serving God, Humanity and all Creation”.

“Never doubt that you cannot contribute to our Pastoral Plan,” Bishop Dowling told the faithful.

“Each of us has gifts, talents and time. We are all needed if this new Pastoral Plan is to make a difference to our Church, our societies, and the environment.”

The mood changed into high gear with the arrival of the marchers at Regina Mundi. 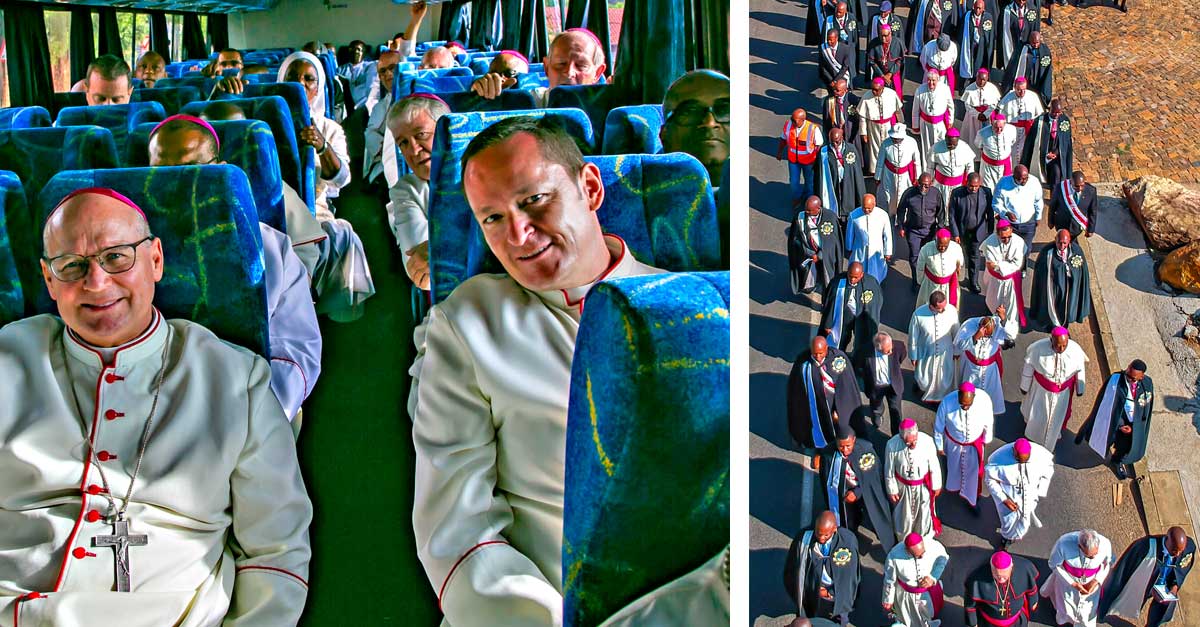 (Left) Papal nuncio Archbishop Peter Wells with bishops and other dignitaries on the bus to the launch of the Southern African Catholic Bishops’ Conference’s new Pastoral Plan. (Right) Aerial view of the procession from Mshenguville Park to Regina Mundi church in Soweto before the launch. (Photo: Seldon Reddiar)

She urged the faithful to receive with open hearts the contents of the Pastoral Plan, which she described as “a new dawn in pursuing the mission of the Church in the Southern African region”.

In his homily, on the theme of “Overcoming the darkness prevalent in the world today”, Southern African Catholic Bishops’ Conference president Bishop Sithembele Sipuka of Mthatha retraced the advent of a new dispensation in South African society in 1994.

He recalled that transition from apartheid into a new democratic society had been characterised by “a great enthusiasm and promise of a prosperous future for all of South Africa’s citizens”.

Today, however, the world, and South Africa in particular, is suffering from a “period of darkness which has enveloped society”, he noted.

“State-sponsored corruption, high levels of unemployment, violence against women and children, and the seemingly endless blackouts due to loadshedding are ways in which this darkness is manifesting itself in our society.”

Referring to a cultural darkness, Bishop Sipuka noted that the culture of individualism is increasingly taking root in South African society, with its worst effects on the poor and socially marginalised.

“We are becoming a materially polarised society, based on the flawed premise of ‘winner-takes-all’,” the bishop said.

As an example of cultural darkness, he referred to the lack of racial cohesion in South African society.

“We need to foster a more racially consorted reality in the Church and society at large, and encourage those who have stayed away from an occasion such as today to be present in future,” he appealed.

Bishop Sipuka emphasised that the Church must reaffirm its role of missionary discipleship in society.

“The symbol of the hand for the Pastoral Plan is there to remind us that we are all called upon to make a contribution to the transformation of our world from darkness into light. The Pastoral Plan calls upon us to get our hands dirty in spreading its message, and in achieving its objectives,” he said. 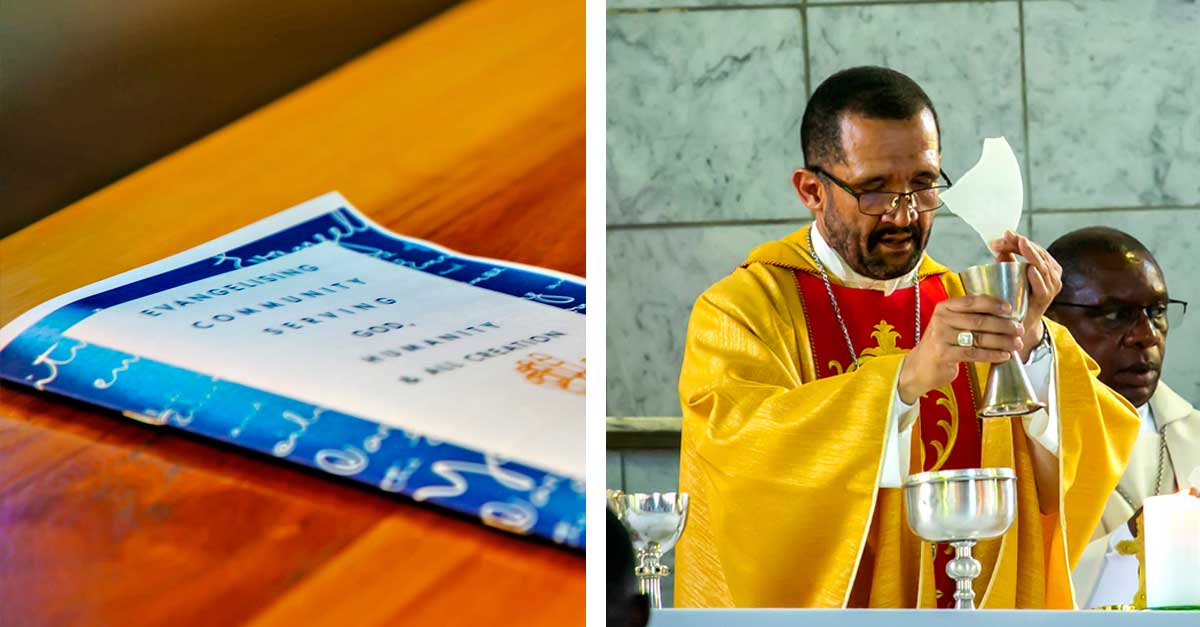 “Through this Pastoral Plan we are united in our clarion call to say: ‘Let’s end the darkness in our society.’ Let’s be active participants in safeguarding the interests of the poor, the vulnerable, the downtrodden, the unemployed, the elderly, as well as the sick,” Bishop Sipuka said.

Bishop Edward Risi of Keimoes-Upington outlined the development of the Pastoral Plan, its intended outcomes, and the chief agents for implementation.

Speaking to The Southern Cross after the Mass, Cardinal Wilfrid Napier of Durban said that in contrast to the 1989 Pastoral Plan, “Community Serving Humanity”, this document focuses not so much on untangling the effects of apartheid on society but on implementing a response to challenges brought on by far-reaching economic and social changes in the world and Southern Africa in particular.

“This time we are saying that each one of us is a living exponent of the Good News, the Gospel. Each one of us must take the Gospel into the circumstances of our own lives, and communities,” the cardinal said.

Archbishop Dabula Mpako of Pretoria said that the essence of the Plan is to transform Catholics to be agents of change.

“The Pastoral Plan asks us to define and redefine the vision, mission and ministry of our Church in relation to our current living conditions,” he said.

SACBC spokesman Archbishop William Slattery noted that the impact of the Pastoral Plan is in the hands of the entire Catholic community of the region.

“The Pastoral Plan is a vehicle with which we Catholics are urged to go out into the world and spread a message of hope across our communities,” he said.

“It is an excellent start, and a necessary start. Now the real work begins.” 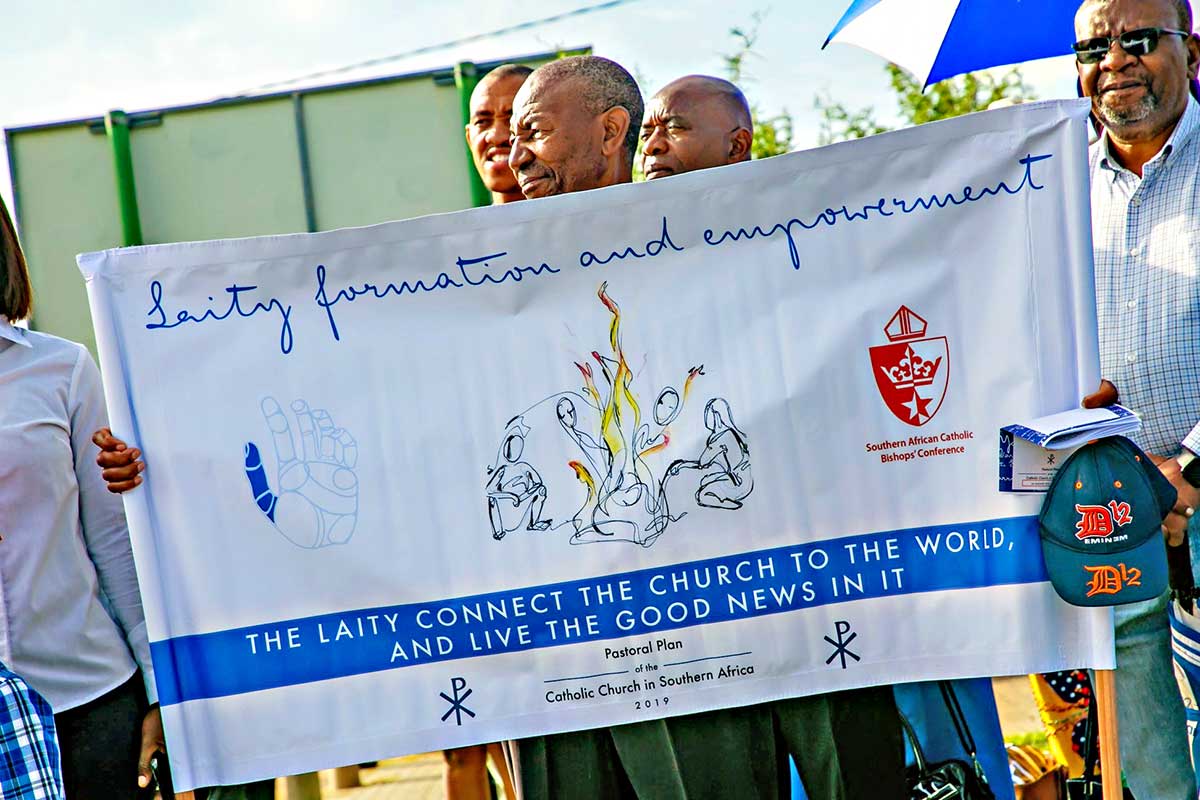 A man holds up a banner with one of the eight themes of the newly-launched Pastoral Plan, “Evangelising Community, Serving God, Humanity and all Creation”.  (Photo: Seldon Reddiar)