In the fourth article on Jesus’ last days, Günther Simmermacher looks at Jesus’ trials in the religious and civil courts. 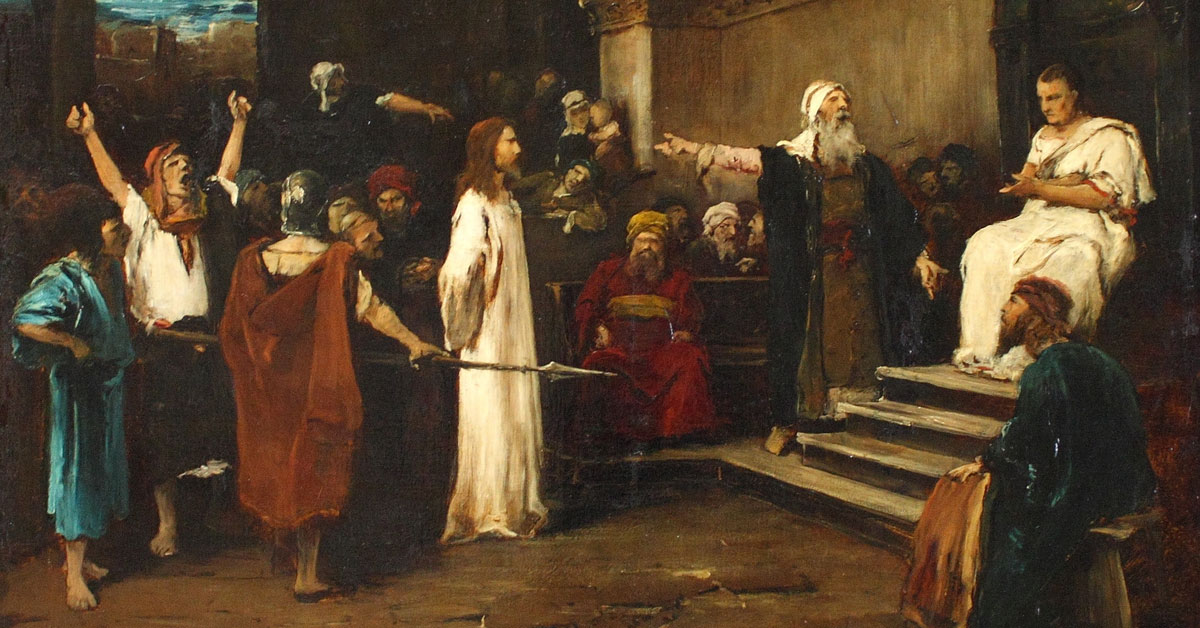 Christ before Pilate, by Hungarian painter Mihály Munkácsy in 1881. The trial was held in the public area outside the praetorium, the seat in Jerusalem of the procurator Pontius Pilate.

After his arrest in the Garden of Gethsemane, Jesus is taken back to the area of Jerusalem where just a few hours earlier he had celebrated his Last Supper, on what we now call Mount Zion.

On his way to and from the Upper Room, Jesus and the disciples had taken detours to avoid passing the house of the high priest, Joseph Caiaphas. Now Jesus is led on the shortest route. As they approach the high priest’s house, they take a flight of steps.

These steps date from the 1st century BC, and still exist in our day. Until a few years ago, one could walk on them. Now they are fenced off, but the custodians have left the top few open, so we can still tread where Jesus walked. 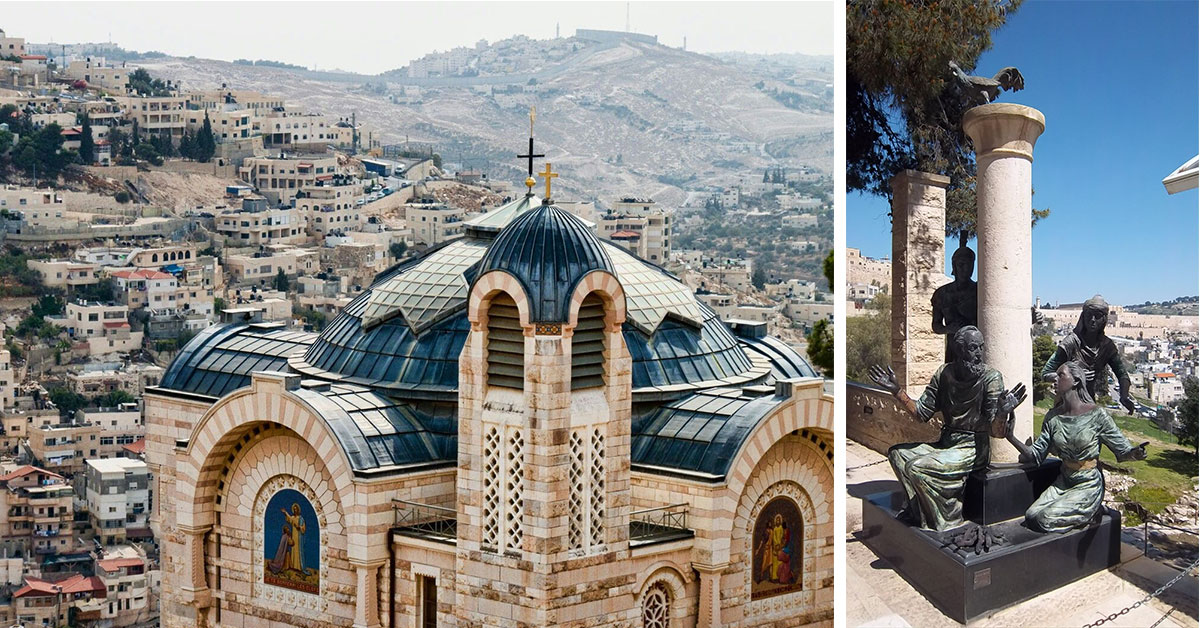 (Left) The church of St Peter in Gallicantu (“Peter where the cock crowed”) on Jerusalem’s Mount Zion. (Right) A sculpture outside the church of St Peter depicts Peter’s triple denial of Jesus. On top of the column is a crowing cock. The church stands on the site of the high priest’s palace where Jesus was found guilty of blasphemy by the Sanhedrin (Photos: Günther Simmermacher).

Next to the steps is the church of St Peter in Gallicantu, which means “Peter where the cock crowed”. This is where the high priest’s 12-room palace stood.

But first Jesus is taken to see Annas, Caiaphas’ father-in-law and clearly still a dominant figure in the religious establishment. Meanwhile Caiaphas calls together the 71 members of the Sanhedrin.

The Sanhedrin, the “Council of Sages”, is the highest authority of the Jews. While it oversees all religious tasks, especially those relating to the Temple, it also plays an important political role under the Roman occupation.

It is dominated by the Sadducees (the group that doesn’t believe in the afterlife), with the Pharisees in a minority.

It is headed by the high priest.  That position is being kept in the family. Annas had been high priest from 6-15 AD, followed briefly by his son Elazar, and since 18 AD by his daughter’s husband, Caiaphas (Annas’ family would hold power uninterrupted until 44 AD, seven years after Caiaphas was removed from power).

While the rigorous Annas — the Sadducees generally have a reputation for being stern characters — interrogates Jesus, Peter and an unnamed disciple make their way to the high priest’s palace. The unnamed disciple is connected and arranges for Peter to access the inner court.

As Peter enters, the young woman staffing the gate recognises him as one of Jesus’ group. Peter denies his association with the Nazarene.

In the courtyard, he is challenged twice more; both times he denies, in his distinct Galilean accent, knowing this Nazarene of whom they speak. The cock has yet to crow—Jesus’ prophecy that Peter would deny him three times has been fulfilled.

Just then, Jesus is led to Caiaphas. He spots Peter and gives him a piercing look. At that, Peter sets off, crying bitterly.

We have already discussed the real reasons why the authorities want Jesus executed. He has challenged their authority and constitutes a threat to the fragile peace which Caiaphas is trying to maintain with the thuggish and brutal Roman procurator, Pontius Pilate.

Technically, the show trial Caiaphas is holding here is an interrogation, for the Sanhedrin has no powers to execute anyone (the later lethal stoning of Stephen will be an extrajudicial execution performed by a mob).

But aware that Jesus has an apparently enthusiastic following, Caiaphas needs solid theological grounds for advocating Jesus’ execution. For Pilate, he already has a political justification in hand.

This kangaroo court hears contradictory witness statements and engages in deliberate humiliations of the accused, culminating in Caiaphas — the presider of the court — slapping Jesus.

Eventually Jesus cuts through the farce and declares that he is indeed the Son of God, with allusions from Psalm 110 (“You will see the Son of Man sitting at the right hand of the Mighty One”) and Daniel 7:13 (the Son of Man as a transcendental figure riding on clouds).

Caiaphas and his fellow sages know exactly what Jesus means. Prompted, Jesus confirms his claim of being the Messiah. His fate is sealed.

Some members of the Sanhedrin, including Joseph of Arimathea, object, but the conviction stands: Guilty of blasphemy.

According to Mark, Jesus is flogged with 39 lashes. He is then incarcerated, lowered into a dungeon, likely an unfinished purification pool or cistern, inside which pilgrims can still pray in our day.

At daybreak a mandatory second hearing confirms the verdict.

When Judas learns how his plan has gone awry—he didn’t want Jesus to die—he returns to the Sanhedrin and throws those 30 pieces of silver, the blood money, at the feet of the sages. He then goes off to commit suicide. 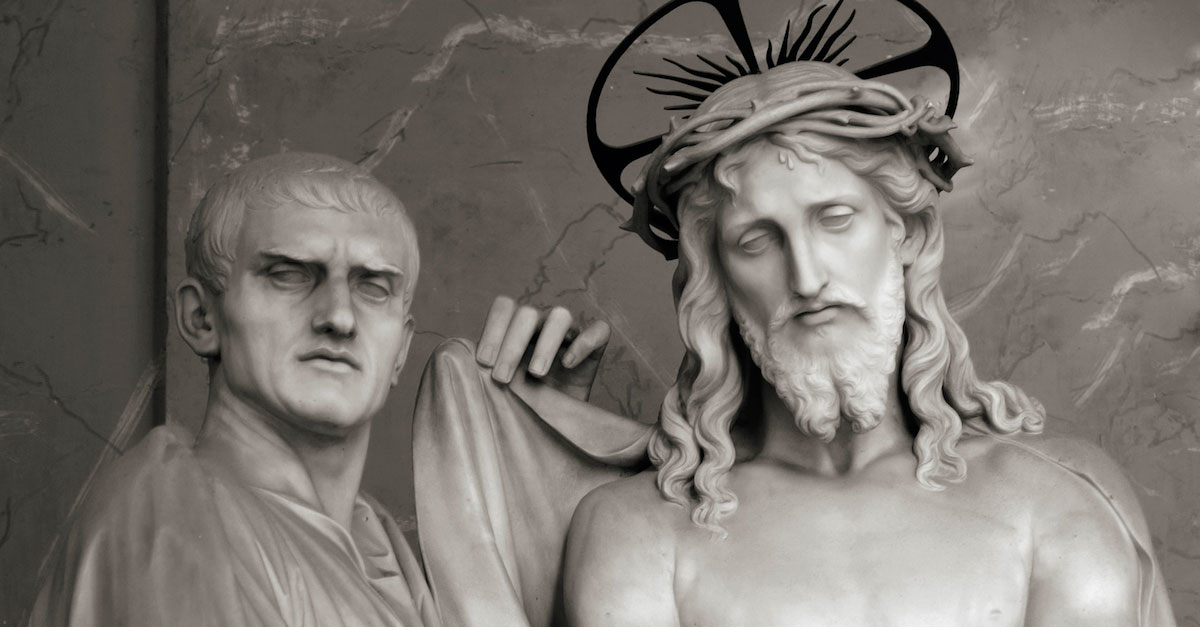 Since the Sanhedrin can’t try capital cases, Jesus has to be condemned by the Romans. For that purpose, he is brought to Pontius Pilate, who is in the city for the Passover period (he usually resides in Caesarea).

We don’t really know where the praetorium of Pilate was located. Archaeology has ruled out the traditional site, Antonia’s Fortress.

Some propose the Herodian Palace in the city’s south-west (at present-day’s Jaffa Gate), but that site has no tradition of Christian veneration.

A third contender is the Royal Palace of the Hasmoneans, but we can only surmise where that was. Fr Bargil Pixner OSB believed it was opposite the south-western area of the Temple (where the Yeshivas Porat Joseph now stands).

The pagans don’t care about Jesus’ supposed blasphemy, but his claim of kingship—remember how he entered Jerusalem on a donkey, in allusion to King Solomon?—is going to interest Pilate.

So the Temple authorities bring the distorted charge to Pilate: “We found this man inciting our people to revolt, opposing payment of the tribute to Caesar, and claiming to be Christ, a king.”

Pontius Pilate has been procurator of Palestine since 28 AD. He is a cruel and uncultured character whose brutality eventually will offend even the ruthless Roman rulers. Pilate certainly is not the vaguely sympathetic ditherer we encounter in the Gospels.

This morning Pilate is in a fix. He has seen that Jesus has fervent enemies, but he evidently also has supporters.

Pilate may be a ruthless man who’ll cheerfully massacre people if it serves his ends, but he is also a pragmatist. With Jerusalem—the city which he hates so much—filled with hundreds of thousands of Passover pilgrims, Pilate is weighing up which decision will cost him less politically.

On the one hand, having talked to him, the accused seems quite harmless, in terms of being a threat to law and order. And that “King of the Jews” business… Well, Jesus of Nazareth is hardly the first messianic figure to be possessed by such grandiose ideas.

On the other hand, Caiaphas, the leader of the local population, is arguing that Jesus is a threat to public order and to Rome itself!

The manipulative Caiaphas issues a severe challenge when he tells Pilate: “If you release him, you are not a Friend of Caesar. Everyone who makes himself a king opposes Caesar.”

This needles Pilate, because “Friend of Caesar” is not just a symbolic term but an important title bestowed upon deserving servants of the emperor, such as himself. Caiaphas is not merely questioned Pilate’s fidelity to policy; he is challenging Pilate’s political authority itself.

Does Pilate let Jesus go and lose face to his collaborator Caiaphas, or does he execute Jesus and risk an uprising by the people who just a few days earlier had hailed him so exuberantly?

The shrewd politician decides he won’t take any responsibility either way. So he sends him to Herod Antipas, the tetrarch of the accused’s home region of Galilee. 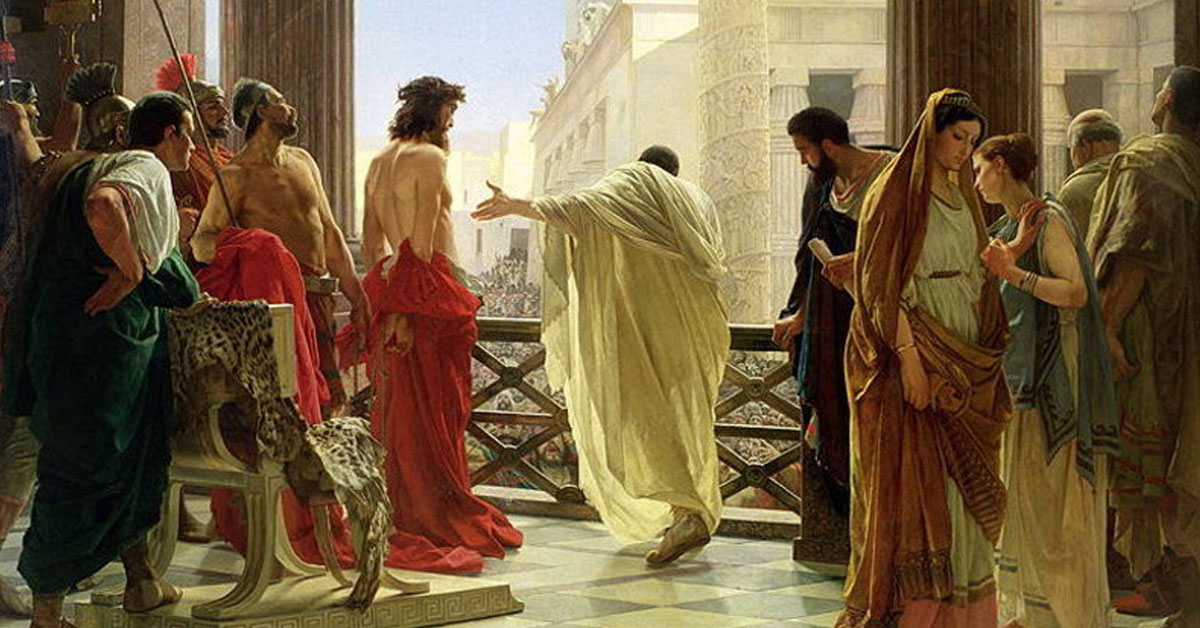 Herod is very pleased to finally meet the famous Jesus and instructs him to perform a miracle. But Jesus doesn’t perform for entertainment like a magician, much less so for the man whom he once called “the fox” and who had executed his cousin John.

Angered by Jesus’ refusal to dance for his life, Herod and his sidekicks mock Jesus, but eventually Herod plays the ball back into Pilate’s court.

Pilate still is intent on evading responsibility for whichever way this affair plays out, and so puts it to a plebiscite among those gathered that early in the morning (possibly a rent-a-mob put into action by the Sanhedrin).

He proposes a compromise: let the accused be flogged for his crime. But the crowd won’t have it.

Pilate exercises one more option to inure himself from any political fallout: the Passover amnesty for one prisoner. He offers the crowd the choice between Jesus of Nazareth or Bar-Abbas, who appears to be a liberation fighter of some kind.

Bar-Abbas means “Son of the Father”, which sounds grand but is a legitimate name at the time. (An old manuscript of Matthew’s Gospel even calls him Yeshua, or Jesus, Bar-Abbas. So the Gospels or reality might have played a little trick of irony on us.)

The crowd calls for Bar-Abbas to be released — and for Jesus to be crucified. For Pontius Pilate that’s good enough: he convicts Jesus on the grounds of claiming to be the King of the Jews, and sentences him to die by crucifixion. Then he washes his hands in innocence. Caiaphas gets his way.

Now, having found Jesus guilty, even though he had leaned towards acquitting him, Pilate orders the most demeaning form of execution, the kind intended to serve as a deterrent, and maybe a warning to the followers of the Jesus movement: Ibis in Crucem — ”You will mount the cross”.

A sign, called a titulus, is made in three languages to let the public know why this man will be crucified: for claiming to be the King of the Jews, thus trying to usurp the supremacy of Caesar.

Tags: path to the passion