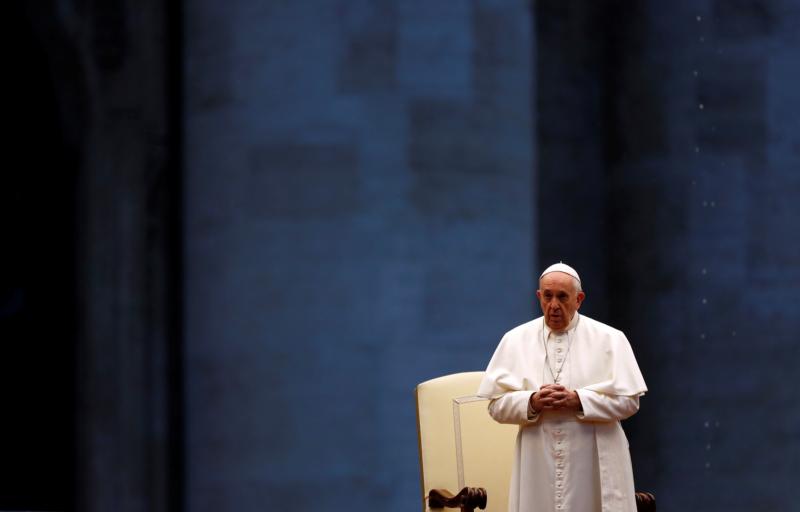 Pope Francis leads a prayer service in an empty St. Peter’s Square at the Vatican March 27, 2020. “What we are living now is a place of ‘metanoia’ (conversion), and we have the chance to begin,” Pope Francis said in an interview about the COVID-19 pandemic, published April 8. (CNS photo/Yara Nardi, pool via Reuters)

By Cindy Wooden – The Covid-19 quarantines, lockdowns and stay-at-home orders are the perfect opportunity for conversion: for individuals, for the church and for governments, Pope Francis said in an interview.

“What we are living now is a place of ‘metanoia’ (conversion), and we have the chance to begin,” Pope Francis said. “So, let’s not let it slip from us, and let’s move ahead.”

The pandemic crisis is an opportunity to reflect on how people use their time and resources, how the church responds to new pastoral needs, how society has allowed the economy to be the first consideration when making decisions about people’s lives and how governments still spend billions on weapons when they cannot provide adequate health care to all their people, the pope said in the interview published April 8 in the U.S. magazine Commonweal and the British journal The Tablet.

Austen Ivereigh, an author and journalist, submitted written questions to Pope Francis; the pope sent an audio recording of his responses, in Spanish, April 3.

Asked how he is living the lockdown, the pope responded, “I’m praying more, because I feel I should,” and he is trying to focus on the needs of other people because “it takes me out of my self-preoccupation.”

“Of course,” he said, “I have my areas of selfishness. On Tuesdays, my confessor comes, and I take care of things there.”

But Pope Francis said he also is thinking of “what will come afterwards. What will be my service as bishop of Rome, as head of the church, in the aftermath?”

“That aftermath has already begun to be revealed as tragic and painful, which is why we must be thinking about it now,” the pope said, adding that the Dicastery for Promoting Integral Human Development already is looking at strategies to mitigate the impact on the poor.

“I’m living this as a time of great uncertainty,” Pope Francis said. “It’s a time for inventing, for creativity.”

“It’s not easy to be confined to your house,” he said, but he cited advice from Virgil’s epic poem, “The Aeneid,” in the midst of defeat: “The counsel is not to give up, but save yourself for better times, for in those times remembering what has happened will help us.”

“Take care of yourselves for a future that will come,” the pope said. “Take care of the now for the sake of tomorrow — always creatively, with a simple creativity, capable of inventing something new each day.”

Pope Francis said he knows it is not easy to be creative as the lockdown drags on, “but don’t run away, don’t take refuge in escapism, which in this time is of no use to you.”

The church needs creativity, too, he said. It needs to learn to live with and value the “disorder” that comes from the Holy Spirit raising up new charisms and calling people to find new ways to live and share the Gospel and, at the same time, to recognise the “harmony” the Spirit creates in bringing believers into communion with each other in the church.

“A church that is free is not an anarchic church, because freedom is God’s gift,” he said. The only proper view of “an institutional church,” he added, is “a church institutionalized by the Holy Spirit.”

“About a week ago an Italian bishop, somewhat flustered, called me,” the pope said. “He had been going around the hospitals wanting to give absolution to those inside the wards from the hallway of the hospital. But he had spoken to canon lawyers who had told him he couldn’t, that absolution could only be given in direct contact.”

“‘What do you think, Father?’ he had asked me. I told him: ‘Bishop, fulfill your priestly duty.’ And the bishop said, ‘Grazie, ho capito’ (‘Thank you, I understand’),” the pope said. “I found out later that he was giving absolution all around the place.”

“This is the freedom of the Spirit in the midst of a crisis, not a church closed off in institutions,” he said. Canon law is important and necessary, but the church’s laws and rules are “for the salvation of souls, and that’s what opens the door for us to go out in times of difficulty to bring the consolation of God.”

The pandemic also has revealed how, “all our thinking, like it or not, has been shaped around the economy,” which, in effect, made it possible “to sacrifice” people through pre-natal selection, for example, or deciding it is not economically feasible to give top medical care to the elderly.

He said St. Paul VI’s encyclical “Humanae Vitae” (On Human Life) was “prophetic” in warning of a culture where “people are selected according to their utility or productivity — the throwaway culture.”

“This crisis is affecting us all, rich and poor alike, and putting a spotlight on hypocrisy,” the pope said, pointing, for example, to “certain political personalities who speak of facing up to the crisis, of the problem of hunger in the world, but who in the meantime manufacture weapons.”

“This is a time to be converted from this kind of functional hypocrisy,” he said. “It’s a time for integrity. Either we are coherent with our beliefs or we lose everything.”

Once the pandemic is past, he said, people must not “file it away and go back to where we were.”

“This is the time to take the decisive step, to move from using and misusing nature to contemplating it,” he said. It is time to really see the poor and the homeless as people and not “settle for a welfare policy such as we have for rescued animals. We often treat the poor like rescued animals.”

Pope Francis encouraged people to follow the example of “the saints who live next door” and give their lives in service to others. During the COVID-19 pandemic “they are heroes: doctors, volunteers, religious sisters, priests, shop workers — all performing their duty so that society can continue functioning.”