In the final of five articles on Jesus’ last days, Günther Simmermacher follows Jesus to Golgotha. 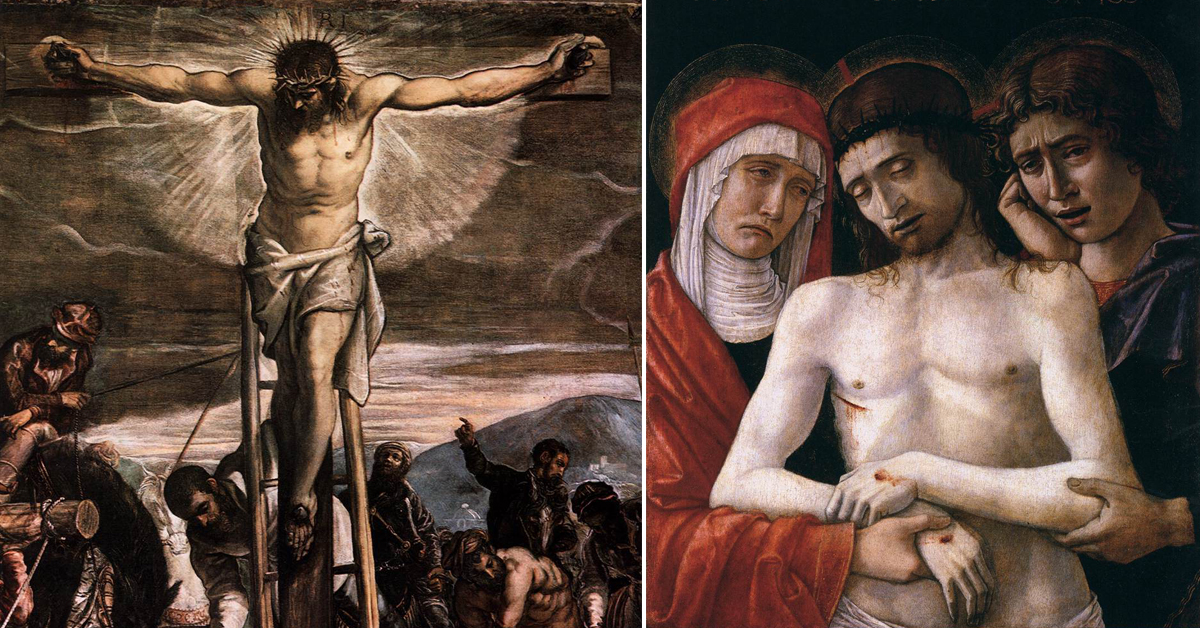 It’s the day after the Passover Sabbath, and presently we are following two people as they are walking home from Jerusalem to their home village of Emmaus.

They are dejected, and tell a stranger they meet along the way about the trial and execution of Jesus of Nazareth, “who showed himself a prophet powerful in action and speech before God and the whole people”.

One of the two, Cleopas, explains: “Our own hope had been that he would be the one to set Israel free.”

In a few words, Cleopas sums up the public opinion of those who just a week ago had greeted Jesus with shouts of “Hosanna” and palm branches.

They had hoped that this man was a liberation fighter who would defeat the Roman occupiers. Instead, the Romans executed him.

So those who had expected Jesus to deliver a political triumph turned against him, or abandoned him, or went home disillusioned. And his other supporters went into hiding, in case they too would be executed for sedition.

Only the women, one male disciple and two members of the establishment didn’t turn against or abandon Jesus.

And with that observation we rewind to where we left off last week.

Jesus is led away to suffer the first portion of his brutal punishment. But first, the soldiers want to have their fun by humiliating their prisoner.

They cover Jesus’ face and tell him to prophesy (just as members of the Sanhedrin had done in their kangaroo court). Then they dress him in cloth of royal purple, hand him a reed as a “sceptre”, and press a crown of thorns into his scalp, in imitation of the Roman laurel wreath.

They mock the “King of the Jews” and offer him vinegar, probably representing the spiced wine served to kings.

But now the amusement has to end: In keeping with the common proceedings leading up to a crucifixion, Jesus is tied to a pillar and is flogged to within an inch of his life.

That part of the torment completed, the bleeding Jesus is then given his cross to bear. Most likely, it is the bar of the cross on which he will be crucified. He must carry it on his shoulders, the wood chafing against his torn flesh. Every step adds to the torture.

Pilgrims in our day follow the path Jesus took to Calvary, which ends at the church of the Holy Sepulchre (whose Catholic Blessed Sacrament chapel holds a reputed part of the column on which Jesus was flogged).

The Via Dolorosa was established in the 14th century by the Franciscans of Jerusalem – though the practice of walking the Via Crucis is ancient – and inspired the practice of the Stations of the Cross in our local churches.

The route is probably not historically accurate, but the hustle and bustle of the market it goes through hints at the atmosphere of the city as Jesus carried his cross to his crucifixion.

The route to Golgotha, just outside the city wall, is not very long, maybe a thousand metres. But Jesus is struggling. Three times he falls. Along the way his mother, Mary, is witness to this pitiful procession. 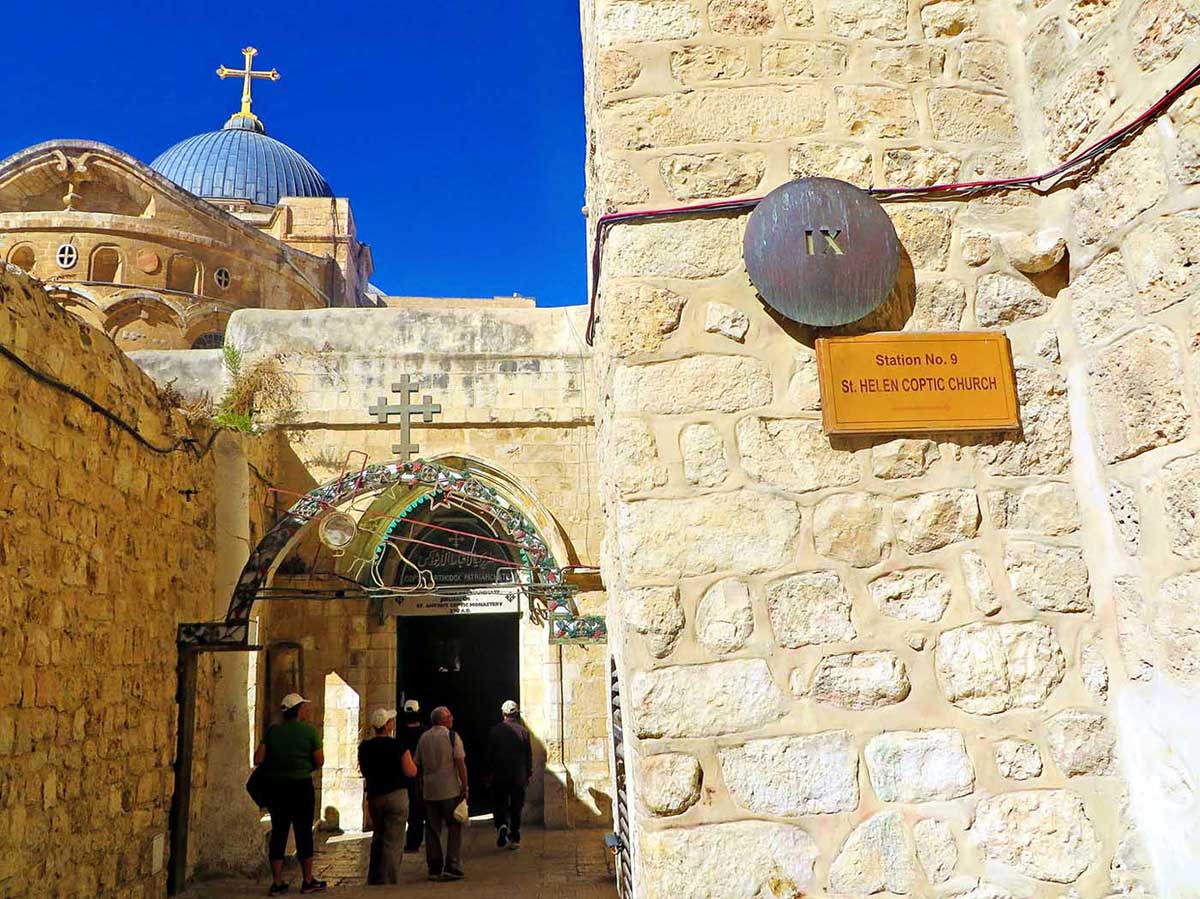 Station IX – Jesus falls for the third time – outside a Coptic chapel on the Via Dolorosa in Jerusalem. In the background is the dome of the church of the Holy Sepulchre, below which is the tomb of Christ’s resurrection. (Photo: Günther Simmermacher)

Eventually the Roman guards grab a random passer-by to help, a fellow from North Africa named Simon, from the town of Cyrene (now Shahhat in present-day Libya).

Simon of Cyrene doesn’t know it yet, but this encounter will convert him (Mark’s Gospel makes it a point of identifying Simon as the father of the early missionaries Alexander and Rufus).

A crowd is following the procession, including a group of unnamed, lamenting women. Jesus catches his breath and tells them not to weep for him but for the terrible future their children will face – another prophecy of the destruction of Jerusalem and its Temple.

Now two other convicts are joining this parade of the condemned which ends at Golgotha. Once a limestone quarry, it is now adjoined by a garden with rock-cut tombs for the burial of the wealthier citizens.

Golgotha, or Calvary, has been covered by the church of Holy Sepulchre ever since the legalisation of Christianity in the fourth century. The historical and archaeological record confirms that this was the site of the crucifixion – we can still touch the spot on which the cross stood – and of the tomb.

The three condemned men are nailed to their respective crosses.

Contrary to common perception, the nails are driven not through the palms of Jesus’ hands and the top of his feet, but through the wrists and ankles, since the palms could not hold the body’s weight and would tear.

This knowledge of Roman nailing technique is attested to by the discovery in Jerusalem in 1968 of the bones of a man who was crucified, with a nail still stuck in his ankle.

Above Jesus head, the Romans affix the trilingual sign, called atitulus, that describes the crime for his execution: for claiming to be the “King of the Jews”.

Sometimes the victim’s legs are broken to bring on a quicker death. But in Jesus’s case, no bone will be broken.

Standing at a distance are the women followers of Jesus, including his distraught mother. With them is the disciple John, to whom Jesus entrusts the welfare of his mother.

In the church of the Holy Sepulchre, an inconspicuous chapel – a canopy, really – marks the spot where the group of women stood. It is at the foot of the Golgotha hill, near the tomb where Jesus would be buried.

At 3 o’clock in the afternoon, Jesus dies with a loud gasp. The Messiah, born in poverty among animals in a stable, has died like a slave on the cross.

His death is accompanied by a sudden darkness (maybe a duststorm from the desert) and tremors (an earthquake?) which tear the curtain in the Temple.

The centurion and those with him guarding Jesus are spooked by this. The soldier exclaims: “Truly, he was the Son of God!”

Perhaps because they are troubled by these natural phenomena, the soldiers decide to put an end to the executions. The legs of the other two men are broken to hasten their death.

One soldier, tradition names him as Longinus, makes certain Jesus is dead by piercing his side. Water and blood pour from the wound – blood for the sacrifice; water for the new life. 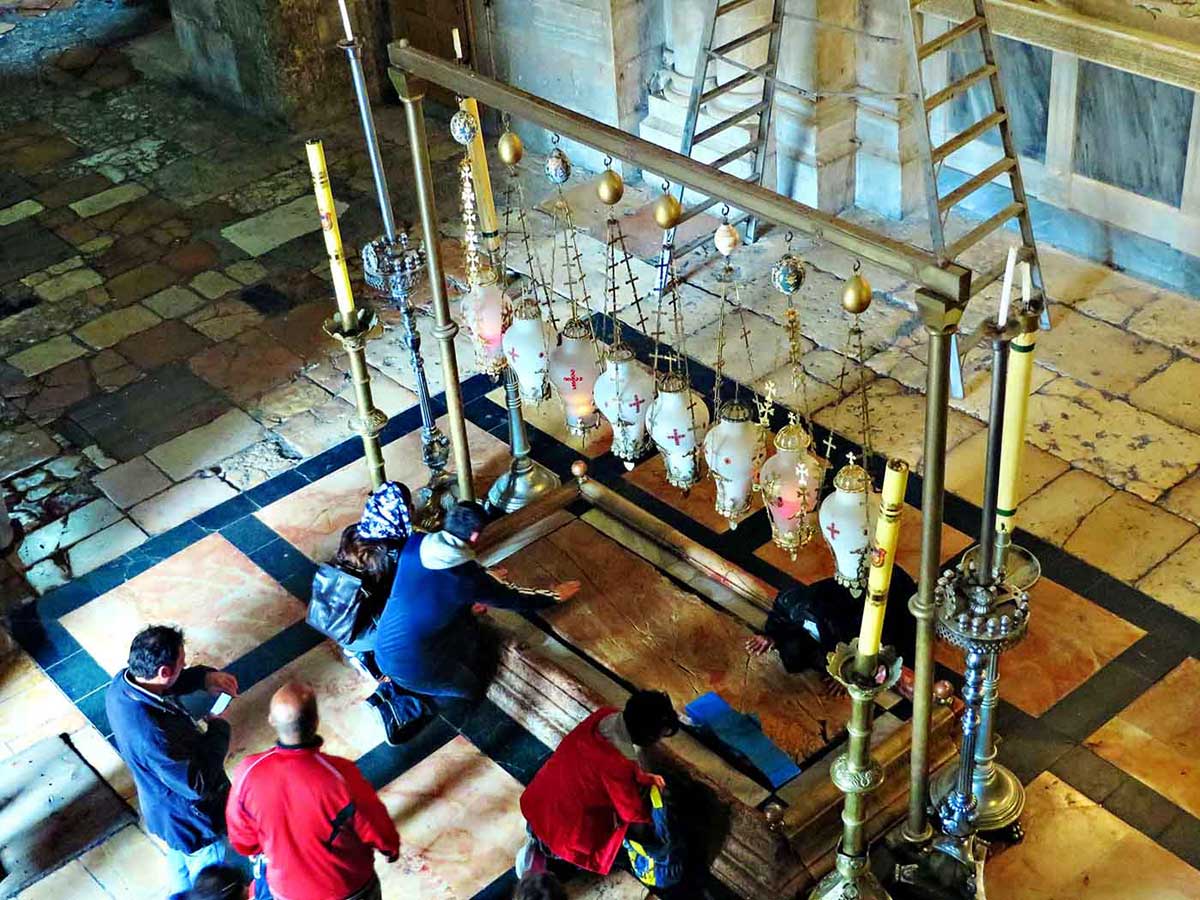 Pilgrims pray at the Stone of Unction in the church of the Holy Sepulchre, which marks the spot where Joseph of Arimathea and Nicodemus prepared Jesus’ body for burial in the tomb. (Photo: Günther Simmermacher)

Now Jesus’ body must be interred before nightfall signals the beginning of the Sabbath, when burials are not allowed.

The rich have tombs, usually hewn out of the rock, for their burial (as described a few weeks ago, when we were in Bethany). Those of lesser means are buried in 2m-deep shaft graves.

The ground-burial would be the fate of Jesus’ corpse, but the wealthy Joseph of Arimathea – a Pharisee who had spoken up for Jesus at his interrogation in the Sanhedrin – has secured permission from Pontius Pilate to take care of Jesus’ body.

Taking care of the dead is widely regarded as the most selfless form of charity because it cannot be reciprocated. With his friend Nicodemus, Joseph wraps Jesus’ tormented body in a shroud which he bought on the way back from Pilate.

They apply spices, bought by Nicodemus, so that when the time comes to properly anoint the body after the Sabbath, it will not smell.

They then carry the shrouded body to Joseph’s yet unused tomb, place it on the ledge, and close the tomb with a heavy stone.

The Christians of Jerusalem always knew where the tomb was, even when it was covered by a Roman temple for 200 years. Since 336 AD, Christians have venerated the tomb in the church of the Holy Sepulchre.

In 2017 the ledge on which Joseph and Nicodemus placed Jesus was exposed for the first time in half a millennium during restoration work.

At the prompting of the high priest, Pontius Pilate has appointed two soldiers to guard the tomb.

Jesus is dead. The story of another failed Messiah has come to an end. His mother and friends are grieving; his supporters, like the pair we met at the top of this article, are downhearted. The 11 closest aides are in hiding.

The story of Jesus is over… 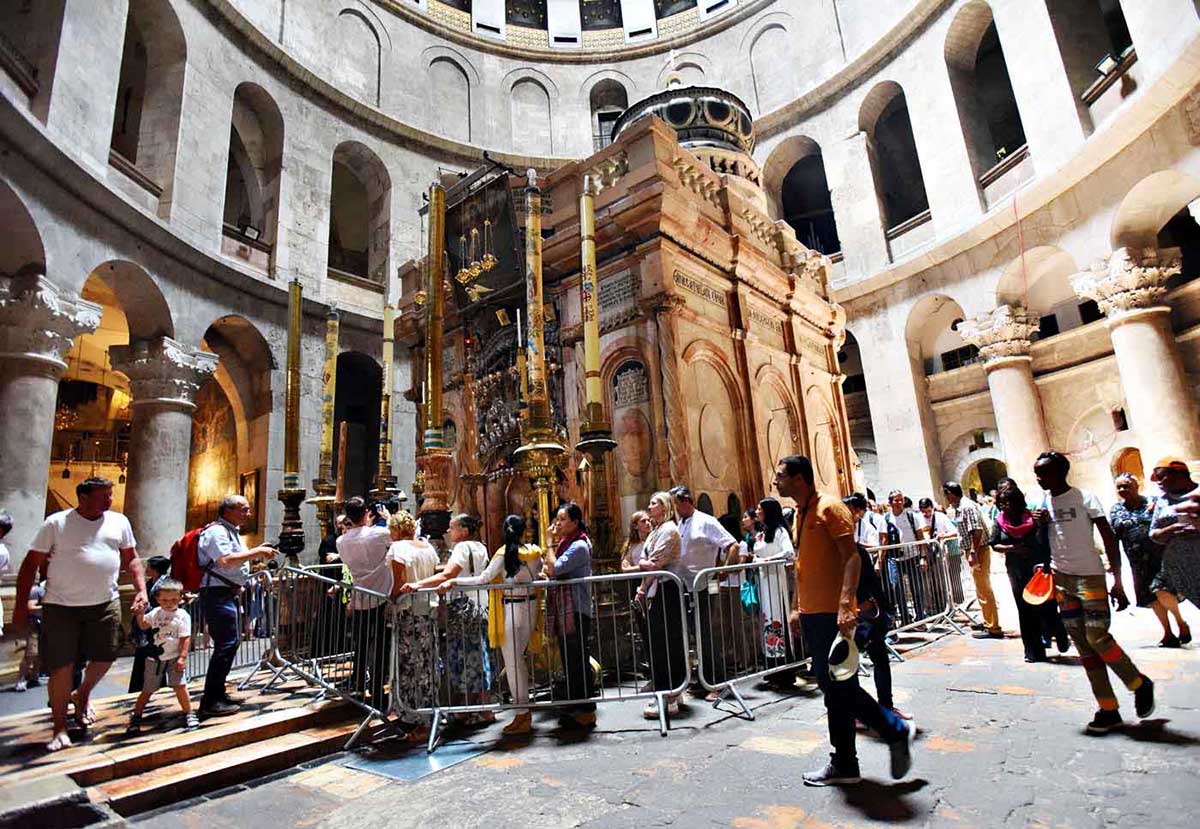 Pilgrims outside the edicule in the church of the Holy Sepulchre in Jerusalem’s Old City, which holds the tomb of Christ – the place from which he rose. (Photo: Debbie Hill/CNS)

On Sunday morning, a group of women – the men who wrote the Gospels can’t agree who exactly was in that group – come to the unguarded tomb to complete the burial of Jesus. But they find it open and apparently empty.

The reader does not need to be told about what happens next. Suffice it to say: The Lord is Risen!

And what date is today, that first Easter? Based on the testimony of the synoptic Gospels that Jesus was executed on Friday, the 15th of Nisan in the lunar Jewish calendar, the most credible calculations place the event in the year 33 AD.

This means that the date of the Resurrection – the moment without which our faith is in vain (1 Cor 15:17) – is April 5.

Let us return to the two followers whom we accompanied in the beginning of this article? Having realised just who that mysterious stranger they have met is, they are sprinting back to Jerusalem to tell the disciples that they have encountered the Risen Christ.

But we dealt with that in last year’s two-part series (https://www.scross.co.za/category/features/resurrection/).