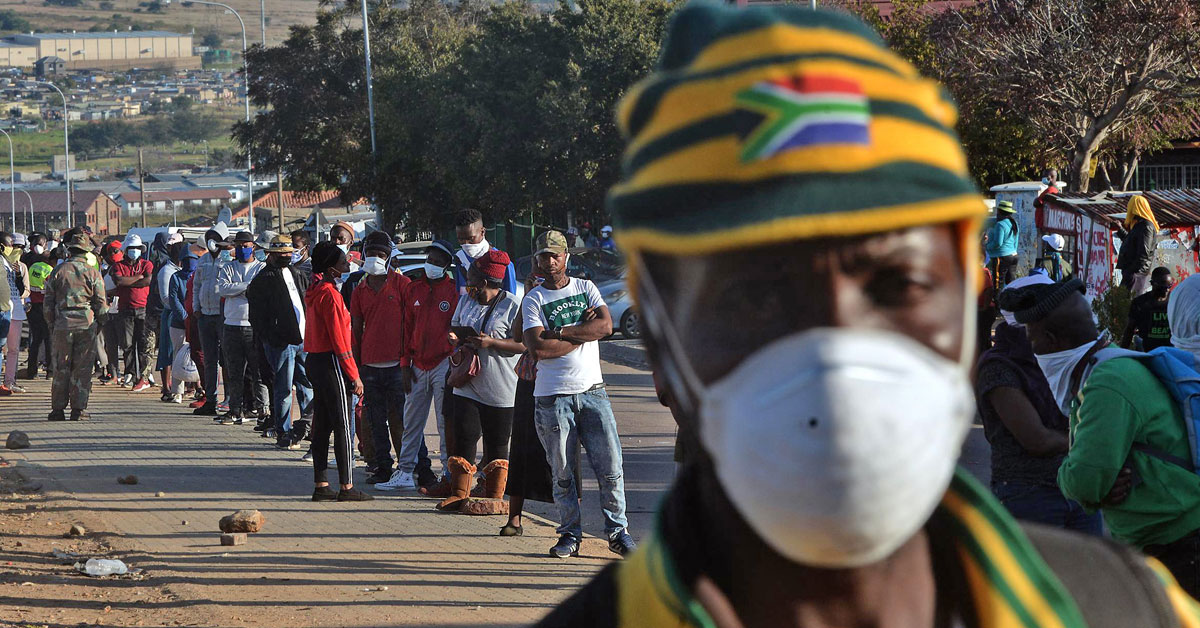 People wait in line to receive food in Pretoria, South Africa, May 2, 2020, during the COVID-19 pandemic. (CNS photo/Oupa Mokoena, RealTime Images via Reuters)

In a new pastoral letter, the archbishop of Johannesburg said that the strict regime of “stay at home” during the lockdown has revealed — or perhaps brought into the open — some of South Africa’s more serious societal challenges.

Coronavirus has turned the whole world upside down and virtually brought it to a grinding halt, said Archbishop Buti Tlhagale.

“The affliction of Covid-19 forced the hand of the authorities to declare a National State of Disaster. As a result, the already sickly economy ground to a halt,” the archbishop noted.

The archbishop pointed out that many employers did not have enough money to pay employees and some businesses would fold.

“Many simply lost their jobs, thus bringing hardship, disappointment and unhappiness to many families. Those who have lost their jobs join the 29% who are already unemployed.  The scourge of unemployment leads to homelessness, poverty and a plethora of other social ills,” Archbishop Tlhagale said.

In regard to violence against women during the lockdown, he observed that the lockdown has shown South Africa to be still a deeply patriarchal and violent society.

“Christianity teaches the equality of man and woman. Many men who exchange marriage vows of equality, of belonging together, of becoming one person, do not appear to believe in what they say,” he said.

“‘Stay at home’ in a restricted space for an unusually long period of time appears to create an opportunity for some men to become violent towards women.”

If only a fraction of the resources mounted against Covid-19 were dedicated to uprooting violence against women, the change in the attitude of both men and women would be remarkable, Archbishop Tlhagale said.

Even during the lockdown, there have been instances of break-ins and looting, he noted, but what has been most unusual is the vandalising and setting alight of more than 2000 schools across the country.

“In some cases equipment has been stolen. In other cases, the schools were set alight without any break-ins. Wanton destruction of property appears to be the South African way of expressing deep-seated grievances and of rebelling against society,” the archbishop said.

“Covid-19 and its ‘stay at home’ restriction offer an ‘excuse’ and an opportunity to commit crime. But the burning of schools is done by young men who appear frustrated, angry and alienated,” he said.

Some health workers have lost their lives after being infected by the patients they served in hospitals and this no doubt has had a devastating effect on their families, said the archbishop.

“Many knew of the danger but continued to help others to recover from their illness. Doctors and nurses take care of the sick because it is their job. True. But there is something more. In carrying out their duties, they also make the infirmity of others their own. Theirs is a beautiful act of self-giving,” he said.

When religious gatherings are allowed, which is expected to be at Level 1, “Christian believers will link the victims of Covid-19 and their families with the painful crucifixion of Jesus Christ”, Archbishop Tlhagale said.

“We will celebrate our liturgies in solidarity with the dead, not in their anonymity, but as deceased persons whose hope is brought to fruition in the Resurrection of Christ the Redeemer of humankind.”