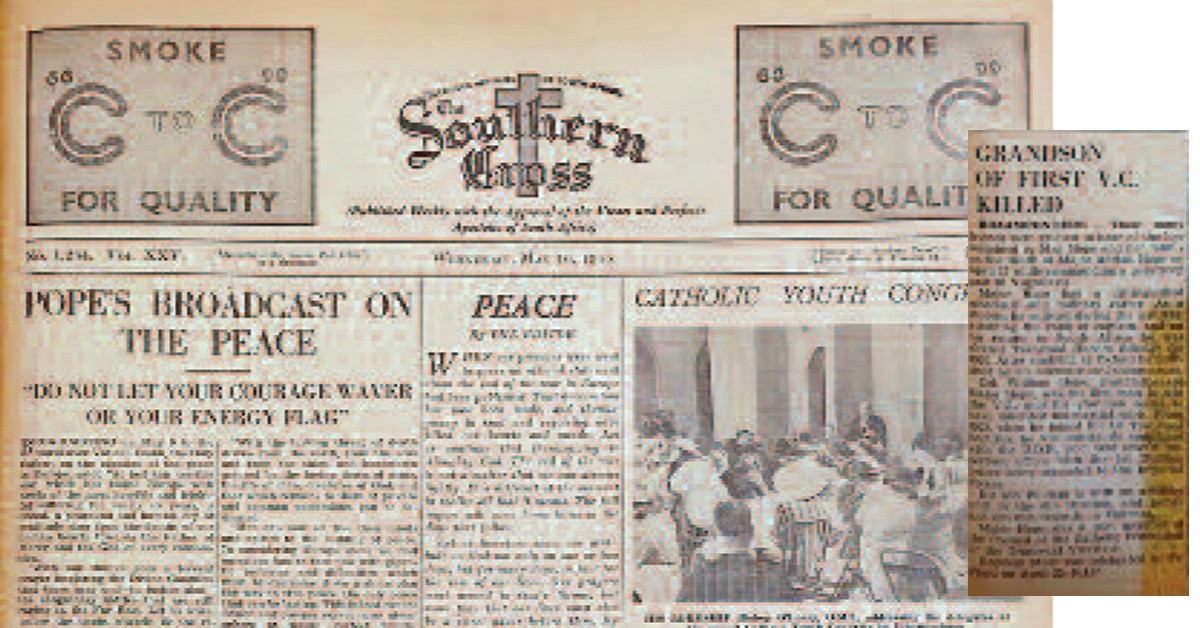 Pope Pius XII on end of the war

In a radio broadcast marking the end of World War II in Europe, Pope Pius XII speaks on behalf of the fallen soldiers who admonish the world: “Let the architects of a new and better Europe arise from our bones and graves and the earth upon which we are scattered like seeds of corn.”

Many Catholics were imprisoned in the Dachau concentration camp near Munich including “the famous Jesuit, Fr [Rupert] Mayer of Cologne, who was in contact in the camp with Pastor Niemöller”. Others included auxiliary Bishop Michal Kozal of Wloclawek in Poland, and Fr Joseph Kentenich, the Pallottine founder of the Sisters of the Catholic Apostolate, who are working in Cape Town, Oudtshoorn and Queenstown.

The roll of honour of local Catholics who fell in the last weeks of the war includes Lt Cecil Sumner, 26, of Durban; Lt Cecil Boyd, 20, of Durban; Patrick Tanguey; and (mentioned on the front page) Major Adrian Hope of Johannesburg.

Those who have a right to our prayers

In his front-page editorial on the end of the war in Europe, editor Fr Owen McCann calls readers to prayers of thanksgiving. “Let us pray, too, for all those who have lost their lives in this gigantic struggle… They are all our brothers and they have a right to our prayers.”