Archbishop William Slattery: We Miss You All 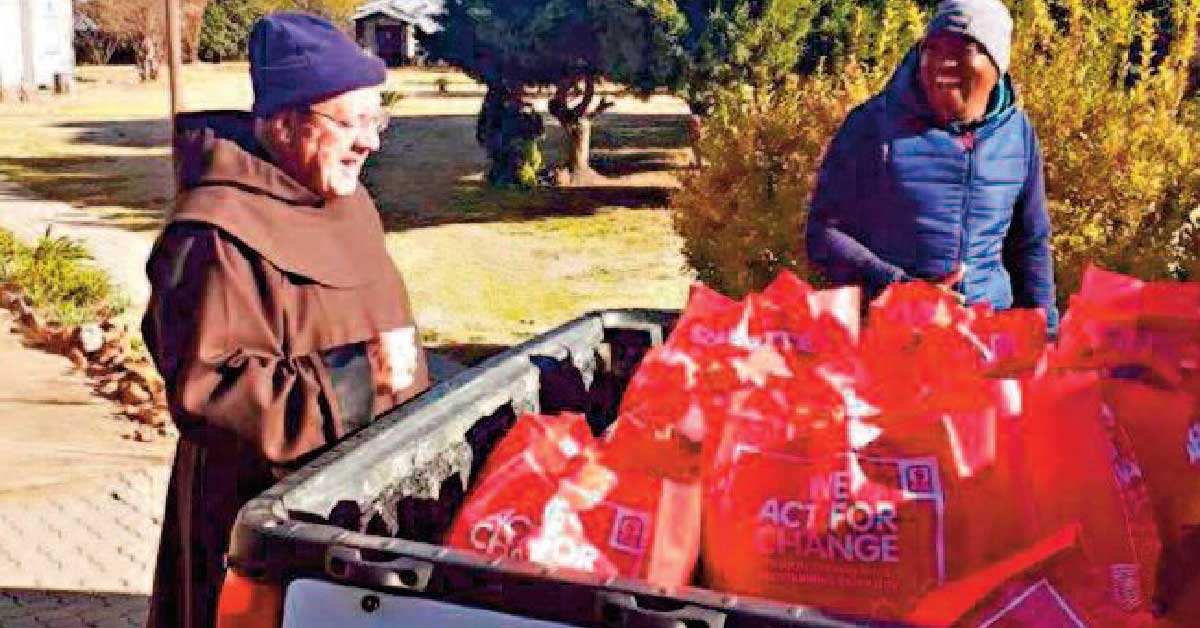 Archbishop Emeritus William Slattery, a Franciscan, is seen here blessing food parcels before their distribution to the poor of the LNJ settlement in Pretoria archdiocese.

On the occasion of the feast of Corpus Christi, the bishops of Southern Africa said they felt deeply their inability to share the Eucharist with the faithful.

A statement issued by Southern African Catholic Bishops’ Conference spokesman Archbishop William Slattery, retired of Pretoria, notes that the bishops know that Catholics also missed the celebration of this beautiful feast, as they remain largely isolated.

“What memories arise in us as we remember the happy time of days gone by when we went in procession on this day, when we decorated our churches and altars, attended Benediction, knelt in adoration and often made our First Holy Communion,” the archbishop said.

“This year, out of charity for the health of our neighbours, we remain alone and distant from the holy sacrament.”

He noted the words of the Lord that are echoed in the Eucharistic consecration, “Do this in memory of me”, can also be translated as: “When you do this you bring me back.”

“In his death and Resurrection, Jesus lives out the unique event of history which does not pass away. All other historical events happen once and are then swallowed up in the past. The event of the Cross and Resurrection abides and is always immediately present,” Archbishop Slattery said, referring the Catechism of the Catholic Church.

He noted that at Mass we are brought to the saving Lord himself.

This is in Jesus’ words in the feast’s Gospel reading: “My flesh is real food and my blood is real drink. He who eats my flesh and drinks my blood has eternal life and I will raise him up on the last day.”

“He is immediately present to us. We are not alone,” the archbishop noted.

Archbishop Slattery said that the bishops miss the experience of community especially on such a feast, for as St Paul says in the second reading: “The fact that there is one loaf means that though there are many of us, we form a single body because we all have a share in this one loaf.”

“The fact of being alone accentuates our feeling of loneliness,” the archbishop said.

Archbishop Slattery also stressed that this distance from the Eucharist should alert us to the deep meaning and challenge of approaching the altar.

“Though the Eucharist is a moment of adoration, it is especially a commitment to action. The dream of the Lord in surrendering himself is that we love one another by reaching out to those who suffer, the poor, the homeless, the lonely, the sick, the rejected and the victims of Covid-19,” he said.

“Many in South Africa are isolated in this pandemic and feel hopeless and insecure. By the reception of the Eucharist, we must embrace those who are struggling, who live on the edge, who feel unwanted,” Archbishop Slattery said.

“If we learn from the Lord in the Eucharist to care and share, then others will live and the Lord’s dream for our world will become a reality. If we become that which we receive, then when we later come to Mass together, he will fill us with a new and wonderful joy,” the archbishop said.