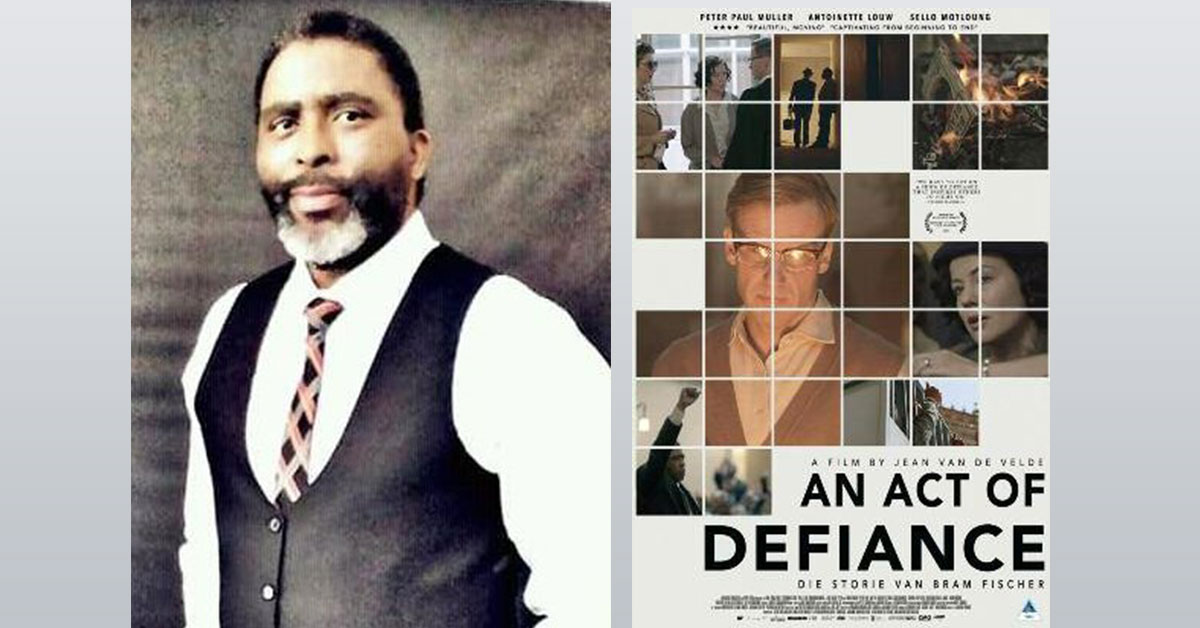 (Left) Actor Sello Motloung, a Catholic, believes that the coronavirus pandemic has had a big impact on the film industry, saying that it will take some time before things will get back to normal. (Right) The poster for the 2017 film An Act of Defiance, in which Sello Motloung played Nelson Mandela (seen in the bottom left panel).

One of South Africa’s best-known actors is a practising Catholic. Sello Motloung spoke to Daluxolo Moloantoa about acting and his faith.

Eight years ago he contaminated the water reservoir of a small mining town called Horizon Deep in the Free State to get even with two former colleagues after a deal went sour.

While the town’s community was under quarantine, he was hunted down and eventually given an early pass to the pearly gates by one of his colleagues.

If you are wondering why you did not catch a drift of this news, it’s because it did not happen. If you do know about it, it’s because you caught it in the recent reruns of the 2012 “quarantine episodes” of the popular South African television series Isidingo.

“If the producers of Isidingo knew then where we would be today [with the coronavirus lock-down], they would have gone to town with that storyline,” says Sello Motloung, the actor who played the vengeful poisoner of water.

The popular Catholic actor is the only performer to have played two different major characters in the series before it made its last call in April this year.

But his first-ever television appearance was back in 1983, as a participant in a SABC religious talk-show called Ukholo Lunje.

Apart from his turns on Isidingo, Motloung has played other memorable characters, both on TV and the big screen.

He became a familiar face on local TV screens in the 1990s through appearances in local TV productions such as Backstage (he played Mpumi), Madam and Eve, Generations, Schoop Schoombie and many more since then, including Matatiele and, last year, Rhythm City.

He also appeared in Human Cargo, a Canadian television miniseries shot in Cape Town, based on the Canadian refugee system operating in the face of international terrorism and one of Africa’s most vicious civil wars.

In 2009 Motloung appeared in an episode of the acclaimed series The No. 1 Ladies’ Detective Agency.

He has also featured in major South African film productions such as A Zulu Love Letter, Skillpope, Jerusalema, and Faith’s Corner.

And in 2017 Motloung portrayed Mandela—his former patient, so to speak—in the film An Act of Defiance, a biopic on the life of lawyer Bram Fischer, focusing on his role in the Rivonia Treason Trial.

Prepping to be Mandela

To prepare for his role as Mandela, Motloung immersed himself in historical audio and video recordings provided by the Nelson Mandela Foundation.

These included the famous “Speech from the Dock”, Mandela’s 176-minute address which opened the defence case in the Rivonia Trial on April 20, 1964 (with the immortal words, “…but if needs be, it is an ideal for which I am prepared to die”).

“I wanted a source where I would immerse myself completely in the man’s journey. And what better place than the foundation and its fulfilling resources?” the actor recalls.

His visit to the Nelson Mandela Foundation, which also took in a tour of the archive and the permanent exhibition, introduced him to information he did not know existed.

“It felt like I had visited Mandela himself,” Motloung says.

“I had to suit the images and my dialogue with the life and energy that oozed through the recordings. Clearly, the man was way bigger than what one encounters in the media.”

Some of Motloung’s earliest childhood memories include being fascinated by his parish priest Fr Marina, originally from France, speaking in Sesotho.

“I could not fathom that language could transcend race at the time,” he explains.

His memories also include encountering the distinct smell of incense at his home church of St Michael’s in Meadowlands, Soweto.

The youngest of three children of a domestic worker single-parent, Motloung did all his schooling in his hometown, and began acting attending Saturday acting lessons while in high school at the Fuba Arts Academy in downtown Johannesburg.

Like most other township youngsters, he watched American action movies at the local cinema.

He also went to watch township theatre productions whenever they came to his part of Soweto.

It is in the theatre where he revelled, and sought to learn from such township theatre doyens as Gibson Kente, John Kani, Nomhle Nkoyeni, Fats Bokholoane and others.

It was in theatre that Motloung first made his forays into being a professional actor.

In 1996 he acted in The Good Woman of Sharkville, an adapted parable-play set in the 1940s, by theatre veterans Janet Suzman and Gcina Mhlope.

He followed it up with a 1997 appearance in the Market Theatre production of The Free State—another adaptation by Suzman, this time set on an estate in the cherry-growing Eastern Free State.

In 1998 he appeared in a reworking of the Athol Fugard classic Master Harold and the Boys.

He has since appeared in many other theatre productions, in between his TV and film appearances. These include plays such as Milestone, The Necklace, Cadre and Cold Stone Jug. With some of them he toured overseas.

For a Catholic, it seems suitable that one of Motloung’s favourite television series should have a Church angle: the 1980s saga The Thorn Birds, a sweeping love story set in the Australian Outback.

Forced between the woman he loves, and the Church he is sworn to — SPOILER ALERT — Fr Ralph (played by Richard Chamberlain) lets his clerical ambitions win and stays with the Church, eventually becoming a cardinal in Rome.

Motloung believes that the film industry, like most industries, is going to have to assess its model of operation in light of the impact of the Covid-19 crisis.

“The culture of cinema has been totally affected by the Covid-19 pandemic. It is going to take some time before things get back to normal,” he says.

“One of the ways to adapt to this new world is to go back to the drive-in movie theatres. There’s going to have to be more than just the one still in existence in Johannesburg.”

Motloung practises his faith together with his long-term partner, Nthabiseng Grant. “She is a very committed Catholic. We do everything together, including prayer. I’m very grateful for her, including spiritually,” he says.

Motloung is a staunch believer in how one’s faith and character ultimately have a bearing on one’s legacy. “I think that everything about a particular person depends on their faith in God, and how they treat those they encounter and interact with in the journey of their lives,” he reflects.

“One’s conduct with others is highly important,” he says. “What would make me happy is to be remembered for telling great stories.”

Miss SA: ‘Use Your Voice To Benefit Others’