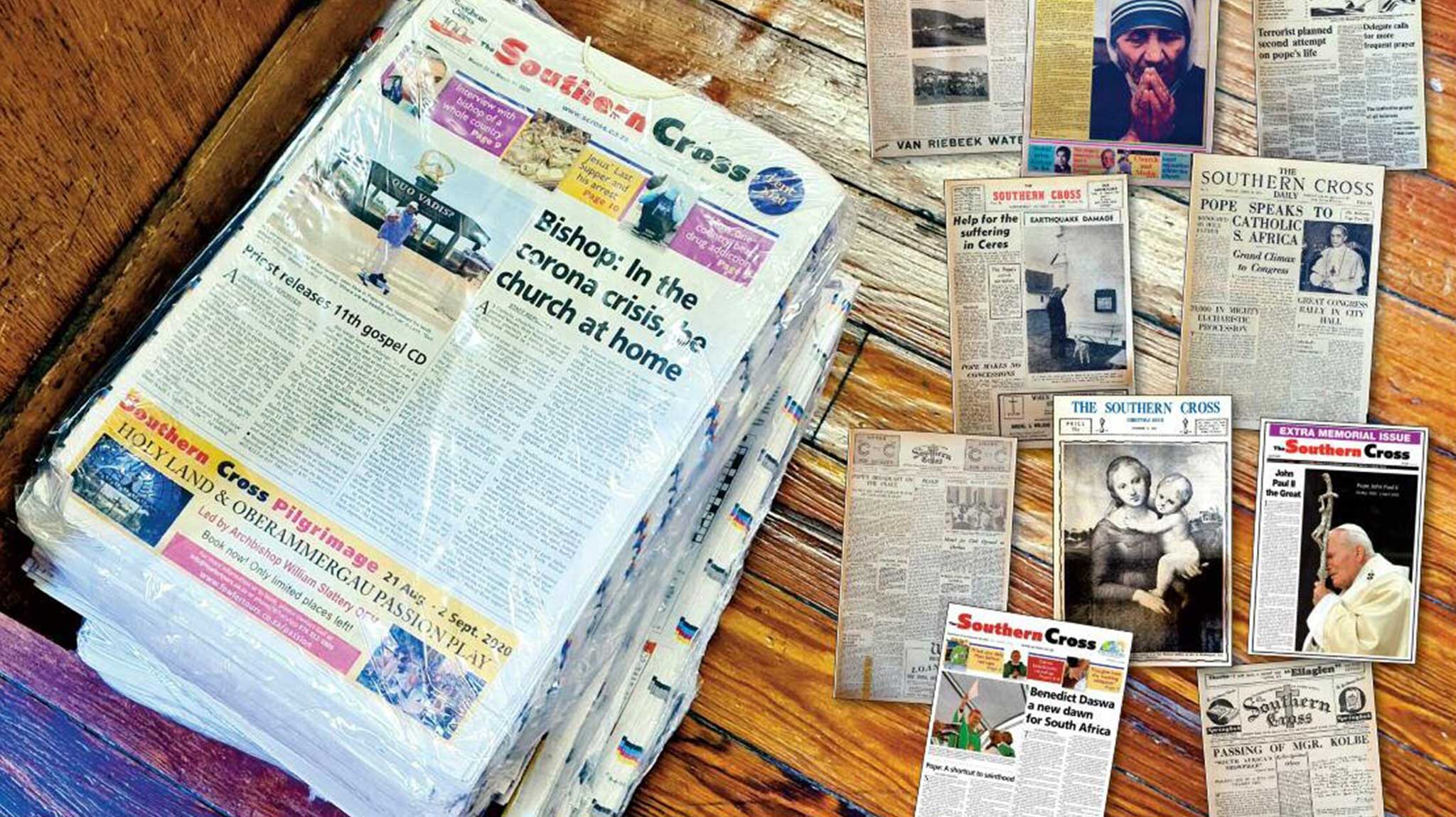 The last-ever printed edition of The Southern Cross, of March 25, is parcelled on the floor of the newspaper’s office. The front-page lead issues the advice that in the coronavirus crisis, we must be “church at home”. By coming out every week digitally throughout the various stages of lockdown, The Southern Cross has aimed to be a presence of the universal Church in the domestic Church. Inset are front-pages of Southern Cross editions from each of its first ten decades. In October the publication turns 100 years old.

As from October 2020, the only national Catholic newspaper in South Africa, The Southern Cross, will become a monthly magazine.

This was reported by its editor, Günther Simmermacher, in the editorial of the July 8-14 issue.

He also added another sore fact: all full-time staff, including himself, will be retrenched, and the magazine will be a responsibility of a freelance team.

Quite a number of Catholics have reacted with shock and sadness to this news.

The Southern Cross would have been in print for 100 years in October. The change of format and the return to freelance editorial/content production represent a closure of a chapter in history.

This development will forever change the face of the Church in South Africa.

However, like all tragedies, it is a challenge for reflection and self-introspection for the Church in South Africa, and a lesson for the worldwide Church, particularly in our region. It is a “phoenix” moment.

Firstly, the emergence of digital media and its invasion of the media space has been detrimental to print media across the board.

People find little or no reason to buy newspapers for the news which they would have already consumed digitally in real-time.

Lack of interest in profound analyses due to the increasing culture of “sound bites” adds to this.

As a Church, we have to read these “signs of times” vis-a-vis our work of evangelisation and homiletics.

Secondly, The Southern Cross’ inevitable transformation has occurred far sooner than predicted, due to the Covid-19 pandemic.

Lockdown measures forced parishes, its major point of sales, to close down, and this resulted in a financial blow. The limited digital subscription base introduced a decade ago could not keep the paper afloat.

However, the pandemic is not the cause of this development, it just speeded it up.

Covid-19, save for its fatal effects, does not introduce anything new to the world but simply exposes infrastructural and institutional integrity or lack thereof.

It is the proverbial “torrential rain, heavy flood and ferocious storm” of Matthew 8:24-25 testing the strength of the foundation. Is it a rock or just sand?

Thus, this transformation of The Southern Cross invites us to analyse foundational challenges in order to avoid a similar fate in the future.

Some of the issues at play:

South Africa has a Catholic population of about 4 million people. However, it has only one national newspaper (and one radio station, Radio Veritas, with a very limited wavelength imprint), and two archdiocesan newspapers, published monthly (Johannesburg) and quarterly (Cape Town).

The rest of the dioceses have some digital presence via social media and websites. Unfortunately, the former is usually not administered properly and have become “free-for-all” platforms with no editorial control. The latter are, largely, skeletal and mainly not “up-to-date”.

People love their languages. They sense when their interests are not prioritised nor their experiences reflected. They, then, do not pledge their support to such a venture or withdraw it if they had.

They are simultaneously both latent and active, overt and covert, asymptomatic and symptomatic.

These limit ecclesial success, compromise the Church’s development and hamper her evangelisation efforts, including The Southern Cross which is entirely lay-run save for one cleric, a bishop, serving on its board of directors.

Another cancer that needs to be mentioned is “parochialism”, which I also call “parish or diocesan narcissism”.

Many people think only about their own parish. Some do manage to go beyond to the deanery and the diocese, largely thanks to ministries and sodalities, a different animal altogether.

The concept of a national Church newspaper becomes an anomaly in such a context. This lack of the sense of the “national Church” becomes evident if there is an issue to be lobbied with government. Only interest groups take it up, not the whole Church.

However, its management from the point of view of communications can be greatly improved to avoid side-effects.

The classic example was when the president of the SACBC on behalf of the bishops’ conference pledged support for The Southern Cross, and a senior bishop outright did the opposite in the letters page of the same edition (April 15-21, pages 1 and 6 respectively).

Thus, the “scaling down” of The Southern Cross provides us with a systemic catalyst for much-needed ecclesiastical renewal, if handled properly and honestly.

We trust that just as “all things work out for good for those who love God and are called for God’s purpose” (Romans 8:28), so shall it be for The Southern Cross and the rest of the local Church in South Africa.

Fr S’milo Mngadi is a priest of the diocese of Mariannhill. This article was originally published on Imbisa’s website at www.imbisa.africa.