Today is the feast day of Mother Teresa – from our vaults, this is a recollection of when the saint came to South Africa.

In November 1988 Mother Teresa visited South Africa. In Cape Town, journalist SYDNEY DUVAL was her driver. Here he remembers his time with the future saint. 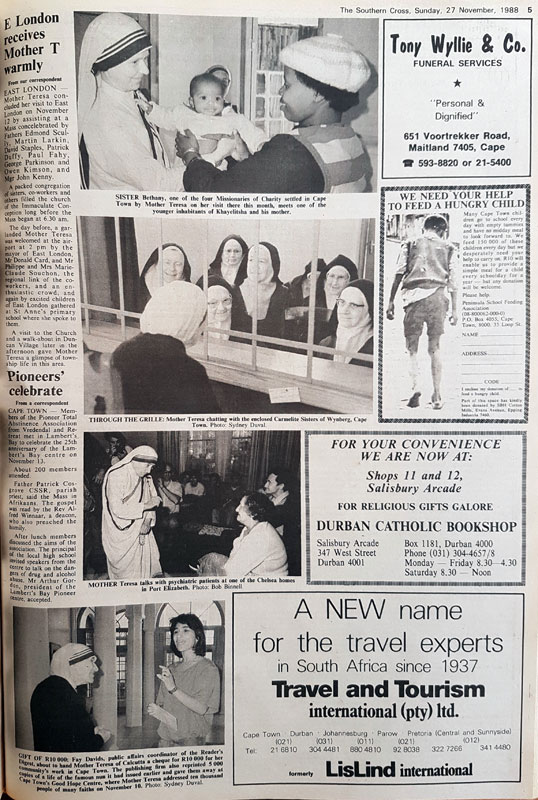 The late Cardinal Owen McCann’s personal driver for many years was Leslie Goldsmith. One day when the Cape Town chancery staff was having a “get to know you” session, he introduced himself, to a burst of laughter from all present, as “my job is to drive the cardinal round the bend”.

In the four days I drove Mother Teresa from venue to venue in Cape Town and the Cape Flats, from November 8-11, 1988, I quickly got the message that my job was to keep my car, and Mother Teresa, on the straight and narrow.

There was to be no time for detours, distractions or small talk. She hardly had time to look up to appreciate the grandeur of Table Mountain, except for a cursory glance with a diffident remark to her host, Archbishop Stephen Naidoo CSsR: “Who would have thought that?”

Mother Teresa was to be seen in various moods as she responded to a press conference; walked through the shacks of Khayelitsha; talked to the Pallottini Sisters at St Joseph’s Home, Montana; got close and intimate with the Carmelites on Wynberg Hill; negotiated with Catholic Welfare & Development’s Peter Templeton for Srs Audrey, Pulpushpa, Concessa and Bethany to set up a temporary home in a sandbag house in Z section, Khayelitsha; complied with Archbishop Naidoo’s putting her under obedience; thrilled to the moment she met Archbishop Desmond Tutu at a mayoral reception that brought the two Nobel Laureates together; interacted with priests, religious and deacons at Mary Help of Christians, Lansdowne; shared cordial greetings with chancery staff.

And she chatted and washed dishes in the early hours at House 20 in Khayelitsha’s Z section, as I waited to take her to the airport with Archbishop Naidoo.

Mother Teresa’s visit, always in the company of Durban travel agent Margaret Cullis, was a journey of contrasts and actions that also created space for a variety of impressions of a remarkable personality.

I think especially of the night she spoke to some 10000 people at the cavernous Good Hope Centre. She stood alone on the vast stage, a frail bird wrapped in a sari of white and blue, looking as though she had found the deck of a giant ship to break her flight across the ocean.

She spoke, illuminated from without and within, in words of utter simplicity and with the conviction of one who has made her option for the poorest of the poor a profoundly lived reality which she embraced with a powerful singlemindedness.

She was to say, with words she repeated elsewhere: “We were not created for our colour, but to love and be loved. My concern is for the poorest of the poor who need love, food, clothing, shelter, the compassion of Christ. But this concern also extends to the many who are poor in spirit all over the world, even where there is wealth.”

Thinking back on these events some 28 years ago, it seems to me that the lasting value of this brief but intense experience of Mother Teresa is to be found in the message she shared with Cape Town, South Africa and other parts of the world. 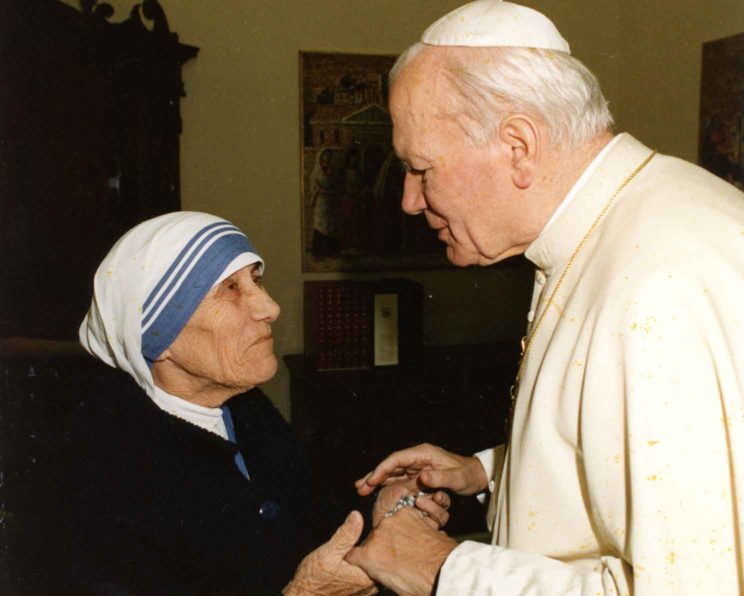 Hers was a challenge to men and women, rich and poor and whole and broken, to reach out to each other, to build bridges between one another—that to proclaim the Good News is “to do something beautiful for God”.

Her message was not something new or astonishing, but a cri de coeur to renew ourselves, again and again, by living out the parable of the Good Samaritan.

The Pastoral Plan for Southern Africa reinforces that parable in calling us to be “a community serving humanity” which includes the poorest of the poor whom Mother Teresa took to her heart and served with heroic virtue — one of the distinguishing signs of saintliness.

When Sr Concessa, a Burundian who describes herself as “one of the lucky ones” to have been  invited to the canonisation on September 4, leaves Khayelitsha for Rome she will take with her the affection of many South Africans for the woman from Calcutta who showed the world what it means to serve the poor, to be a Good Samaritan.

She sang their song with the softest of voices, but the strongest of spirits, wherever her mission took her.

A woman religious and social worker who heard Mother Teresa speak said during her visit: “A saint has put her feet on our South African soil.”