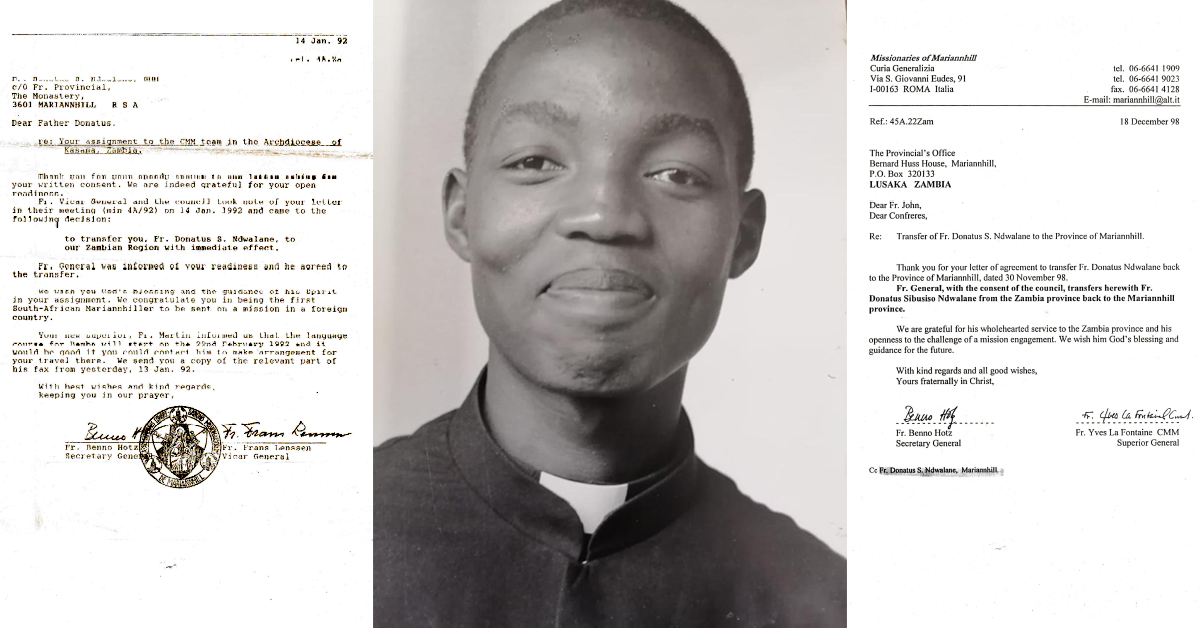 By Sydney Duval – Fr Donatus Ndwalane CMM, who was the first South African Mariannhiller to be sent on a mission to a foreign country, has died at the age of 58 after a long battle with illness.

In January 1992 Fr Donatus and Fr John Bouma CMM, a former provincial superior, left Mariannhill in a bakkie to join a new CMM mission at Kasama, Zambia. The whole monastery community had turned out in the early morning to give their pioneering trek a rousing send-off.

Bishop Paul Themba Mngoma ordained Fr Sibusiso Donatus Ndwalane CMM to the priesthood on 30 November 1991 at St Michael’s Mission, Ndonyane, a district of Umzinto. He died on 16 December at Kingsway Hospital, Amanzimtoti, and was buried at Mariannhill on 21 December after a requiem mass at the monastery church, with the provincial superior, Fr Bheki Shabalala CMM, presiding.

Fr Bheki quoted from documentation that spoke to Fr Donatus’ zeal and missionary achievement at the Kasama mission, saying: “Many young men who joined us from Zambia attribute their choice to the good example of Fr Donatus who also learned and spoke their Cibemba language fluently. He also associated very well with the youth.”

According to Fr Lufeyo Mpaha CMM, who compiled the obituary for the requiem mass, Fr Donatus was born on May 12 1962 at Njane in the Umzinto area, the first of four children – 3 boys and one girl – of Philemon Ndwalane and Venancia Ngcongo. He did his early schooling at St Michael’s Primary (1968-1975) and Impunga Junior Secondary School (1976).

As a young man, he expressed his desire to become a priest to his parish priests, Fr Edgar Weinmann CMM and John Bouma CMM. In 1977 he joined St Mary’s Minor Seminary, Ixopo, completing his schooling there in 1982. In 1983 he joined the CMM postulancy at Mariannhill Monastery and entered the novitiate in 1984.

His novice director, Fr Paul Mandla Khumalo CMM, later Archbishop Khumalo, described the young Donatus as a person who had no problems with authority and in accepting the need for guidance in his vocation. At the same time he was advised to learn to stand his ground and not easily be influenced by others. Donatus gradually developed these characteristics which he took to heart to show at a later stage in his religious life: “Being critical in thinking, defending his position and claims with facts, being objective in his approach, and the ability to tell the truth as he saw it.”

After his profession in 1986, Fr Donatus went to St Joseph’s Theological Scholasticate where he studied philosophy and theology. He took his studies seriously and excelled without difficulties. His formators, now Bishop Siegfried Jwara CMM and Fr Edgar Weinmann CMM, wrote that Donatus “lives a very simple life … he is not a moody type of person”. He was faithful in community prayers and liturgical celebrations and was liked by his fellow students, particularly for his sense of humour.

The obituary notes: “Being deeply aware of the dictates of the vow of obedience, Fr Donatus was more than willing to leave his familiar environment to carry out the missionary mandate of the Mariannhill Congregation in other parts of the world. He was sent to work in Lusaka and Kasama dioceses in Zambia. He had a very positive influence on the youth – many of whom joined our congregation as a result of his dedication and zeal.”

In December 1998 Fr Donatus was transferred back to Mariannhill. He was then sent for further studies at Saint Louis University, Missouri, in the United States of America. While there he was diagnosed with a fatal liver condition.

The requiem obituary records: “Regardless of his ill health and frail body, Fr Donatus continued to minister to the people of God with love and devotion irrespective of his medical condition. His life testifies to the fact that the measure of a life is not in its duration but in its donation. He donated his life through working in various ministries and dioceses.”

Fr Donatus served as chaplain to the Daughters of St Francis of Assisi, Port Shepstone, and as spiritual adviser to the Catholic Women’s League in 2001. He also served the parish of St Patrick, Bellair-Queensburgh, in the Archdiocese of Durban. The Sodality of the Sacred Heart there adopted him as their son as they considered him their spiritual father. He established the Sodality of St Joseph in the parish for the first time.

“The sodality has since grown in numbers and deep spirituality,” the obituary continues. “The men of the parish are forever grateful to Fr. Ndwalane for giving them a meaningful role in parish life.”

At the end of his ministry at Queensburg-Bellair, due to ill health, he reluctantly retired to Mater Dolorosa when his superiors felt he needed to focus on his health. In no time he was back in the evangelisation field as he took another assignment as the chaplain to the Daughters of St Francis of Assisi Convent. This was followed by another assignment in Umzimkulu Diocese where he worked at Dumisa parish from 2019 until the final chapter of his earthly life.

“In spite of frequent hospital visits, Dr Donatus always went back to the mission field as a real soldier/warrior,” the obituary records. “He wanted to die on the battleground fighting for the repentance and the salvation of souls. His resilience and fortitude were quite amazing.”

In his final commendation, Fr Bheki said: “Fr Donatus will be remembered for his honesty and his deep conviction as a genuine religious vocation as a member of the Missionaries of Mariannhill. He accepted his health condition and lived with it with great understanding. He leaves us a homework to build unity among ourselves as Mariannhillers, especially the local confreres. He always yearned for Ubumbano/Unity of all Africans and people of other nations.

“We thank God that Fr Donatus was ours; we thank God that he is still ours. For whoever returns to the Father is not dead. but is still part of the family. Hamba kahle Makhelwane! May your Soul Rest in Eternal Peace! Pray for us that God calls dedicated and honest men to join our community to continue where you left off. Amen.”

Fr Donatus is survived by his mother Venancia who is seriously ill at the moment.

Thanks to provincial superior, Fr Bheki Shabalala CMM for information