Priests in South Africa and the 16th December 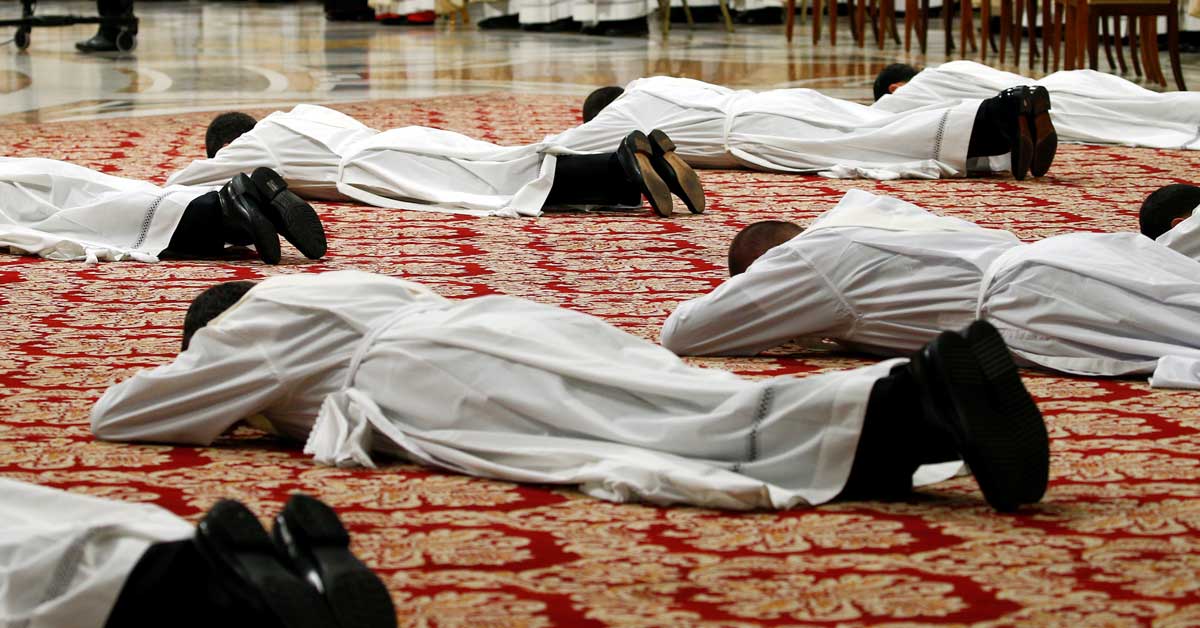 Candidates for the priesthood lie on the floor as Pope Francis celebrates an ordination Mass in St. Peter’s Basilica at the Vatican May 12, 2019. The pope ordained 19 new priests. (CNS photo/Yara Nardi, Reuters)

December 16 is a popular date for the ordination of new priests. FR MATHIEBELA SEBOTHOMA explains why, and reflects on the date in South Africa’s history, and what that means for today’s priests.

Yesterday I was supposed to be at the 10th anniversary of the ordinations of Fr Godfrey Mothokoa Sekhaolelo and Fr Elias Ledwaba. They are celebrating a decade in priesthood in Bochum and Mokopane parishes respectively. To receive two invitations for an event happening on the same day and same time is a dilemma. Yet to be invited is already an honour and recognition that I am grateful for. They were ordained on that day 10 years ago with Fr Rueben Lesetja Galane.

When I opened Facebook yesterday morning, I was reminded that hundreds of priests are celebrating their ordination anniversaries today or during this time of the year.

December 16 is a significant day in the evolution of the Republic of South Africa. Most dioceses opted for the day for ordinations because it was the only public holiday in December before Christmas. December signifies the end of the academic and labour calendar when relatives come together in a festive season to celebrate victories and struggles of the passing year.

The Afrikaner triumphalists named this holiday Dingaan’s Day, to remind the oppressed but restless Africans how the Boers defeated Dingane’s lieutenants in the epic Blood River where the Ncome River in KwaZulu-Natal was turned red with the blood of African warriors.

In an act of sacrilege, the day was also called “Day of the Covenant”, to celebrate “God’s blessing on Afrikaners” against their African enemies. The theology of white superiority began during this time until it was formalised by Afrikaner intellectuals in 1948 when apartheid became official policy.

The General Synod of Afrikaner Churches in the then Natal Republic declared December 16 a day of liturgical thanksgiving. In simple terms, the Covenant meant Afrikaners had a divine mandate to govern Africans who were not chosen by God to enjoy freedom and dignity. The momentous Voortrekker Monument in Pretoria is a reminder of this false theology. Afrikaner churches and theologians have since apologised and asked for forgiveness at the Truth and Reconciliation of post-apartheid South Africa.

I do not know the reason why Nelson Mandela and his comrades chose this day to launch the formation of uMkhonto weSizwe (MK). MK was the military wing of the African National Congress. The first military-style attacks were experienced on this day in 1961. The spirit of the day and time is captured in the Manifesto of MK released on that day: “The time comes in the life of any nation when there remain only two choices — submit or fight. That time has now come to South Africa. We shall not submit and we have no choice but to hit back by all means in our power in defence of our people, our future and our freedom.”

Official Church theology then was comfortable in supporting the status quo. In the absence of ecclesiastical leadership, the period in discussion saw the emergence of a militant and radical black theology influenced mostly by the Black Consciousness Movement of Steve Biko and the works of US writer James Hal Cone who in 1969 published his Black Theology and Black Power.

In 1994 President Nelson Mandela renamed the holiday a “Day of Reconciliation”. Archbishop Desmond Tutu called South Africans to become a “Rainbow Nation”. Our founding mothers and fathers laid the foundation for justice and peace in the New South Africa.

The choice of the day of my friends’ ordination might have been for convenience; it is a public holiday. But the implication is a cause for concern and reflection.

As we celebrate your ordination day, let us remind ourselves of when Jesus became aware or was overwhelmed by his calling in Luke 4:18.

“The Spirit of the Lord is upon me, because He has anointed me to preach the gospel to the poor. He has sent me to heal the brokenhearted, to proclaim freedom to the captives and recovery of sight to the blind (and ignorant), to set free those who are oppressed.”

Our vocation is linked to the communities where we live. Their victories should be our victories. Their struggles are our struggle. As we celebrate our own vocations, let us also prayerfully evaluate the impact of our ministry in changing the material and spiritual demands of the time and place we live in.

As we read in the Letter to the Hebrews, the priest is first human and not some heavenly being. For the priest to truly represent the community before God his humanity is important. For without his humanity he would find it difficult to sympathise with human weaknesses, to mediate between heaven and earth and to be approachable.

For the first time in our lifetime, the Covid-19 pandemic has changed the way we celebrate life. The attendance of Holy Mass and other gatherings is limited to 100 participants under strict rules. Many pastoral workers are still figuring how to minister during the pandemic.

We must appreciate the fact that members of our community really need a break. We too. Students only completed their final exams a week ago. With our migrant labour system, this is an opportune time for the majority of workers to visit their parental homes when they have an annual bonus or personal savings to share with their loved ones. Black tax is real.

Amidst our personal or social challenges, we do not have a choice to submit, but to continue the struggle – aluta continua! As we begin the new year of our anniversary, let us embrace the daily struggles of the people.

Let us develop new contextual theologies that are relevant to our time and space. Some of these theologies should address gender-based violence, poverty alleviation, environmental degradation, violent crimes & substance abuse. Let us make Church relevant. In basic theology we try to answer the questions: Who is God, where is God, how does God want us to minister, and so on.

As we celebrate our anniversaries, we look with gratitude at the way our humble ministries have impacted the societies we live in.  And we thank God for that. In some of our communities we are the only sign of God’s presence. We are Emmanuel.