Vatican: Sacred Scripture Needs to be Respected and Valued 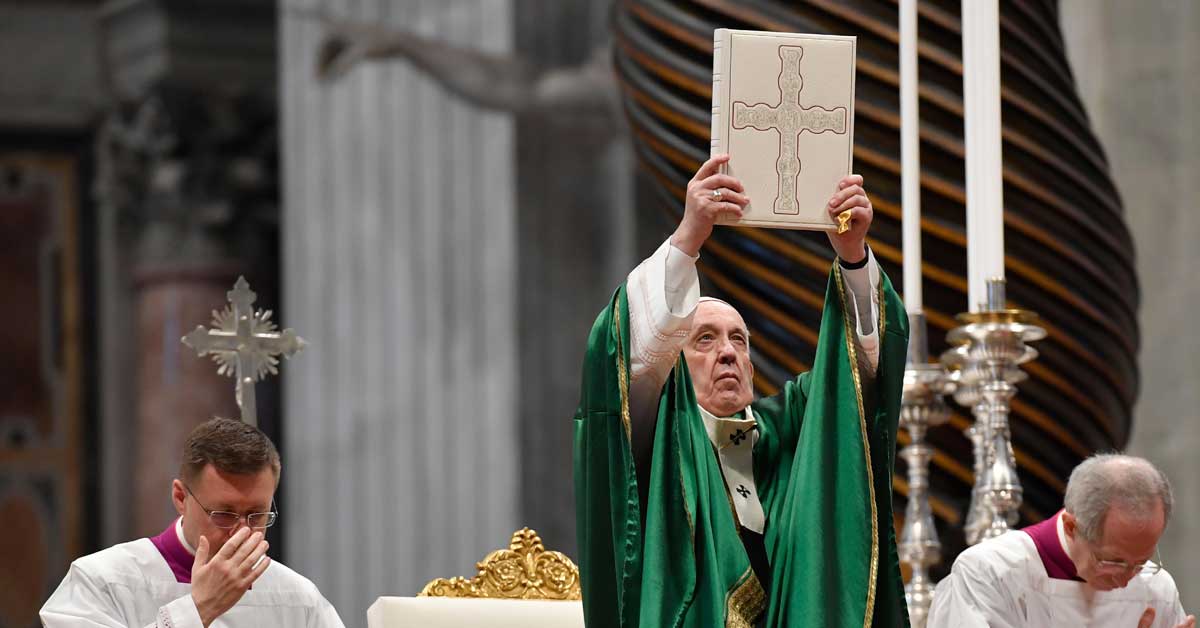 Pope Francis holds up the Lectionary, or book of Mass readings, that was used during the Second Vatican Council. The special lectionary was part of the celebration in St. Peter’s Basilica Jan. 26, 2020, the first Sunday of the Word of God, a new annual celebration encouraging Catholics to know and read the Bible, as Vatican II desired. (CNS photo/Vatican Media)

By Carol Glatz – In preparation for the Sunday of the Word of God on January 24, the Vatican issued recommendations for the day as well as reminders on respecting the sacred Scriptures.

For example, liturgical books should be high-quality texts and not photocopies, and the ambo is reserved for specific moments in the liturgy and prayer, and should not be used for making commentaries or announcements, said a note from the Vatican Congregation for Divine Worship and the Sacraments.

The note was a reminder that the Sunday of the Word of God on January 24, instituted by Pope Francis, is meant to reawaken in the clergy and the faithful “the importance and value of sacred Scripture for the Christian life, as well as the relationship between the word of God and the liturgy,” it said.

Though it is to be held every year on the third Sunday of Ordinary Time, which for 2021 is Jan. 24, “a day devoted to the Bible should not be seen as a yearly event but rather a year-long event, for we urgently need to grow in our knowledge and love of the Scriptures and of the risen Lord,” it said.

God continues to speak his word “and to break bread in the community of believers,” which is why Catholics need to “develop a closer relationship with sacred Scripture; otherwise, our hearts will remain cold and our eyes shut, inflicted as we are by so many forms of blindness.”

Much of the note, however, emphasized the importance of rereading and respecting the theological, ritual and pastoral principles surrounding the word of God proclaimed at Mass and other liturgical celebrations.

One should understand that “the books containing the readings from sacred Scripture stir up in those who hear a veneration for the mystery of God speaking to his people. For this reason, we ask that care be taken to ensure that these books are of a high quality and used properly.”

As such, “It is never appropriate to resort to leaflets, photocopies and other pastoral aids as a substitute for liturgical books.”

Because of the importance of the word of God, “the church invites us to pay special attention to the ambo from which it is proclaimed,” the note said.

The ambo is not “a functional piece of furniture, but a place that is in keeping with the dignity of the word of God, in correspondence with the altar,” which is why the ambo is reserved for the readings, the singing of the Responsorial Psalm and the Easter Proclamation.

“The homily and the intentions of the universal prayer can be delivered from it, while it is less appropriate to use it for commentaries, announcements or for directing singing,” it said.

The note also underlined the need to respect the arrangement of the biblical readings indicated in the Lectionary, “without replacing or removing them, and using only versions of the Bible approved for liturgical use.”

The homily should be used to help explain sacred Scripture and particular importance should be given to a period of silence for appropriately meditating on the word, it added.

Those who proclaim the word of God in the assembly, such as priests, deacons and readers, must be sufficiently prepared and familiar with the text to be proclaimed clearly and must avoid “all improvisation. It is possible to preface the readings with appropriate and short introductions,” however.