The foot-washing ceremony on Holy Thursday is perhaps one of the most meaningful of the Sacred Triduum’s liturgical moments. It has been made even more significant now. – 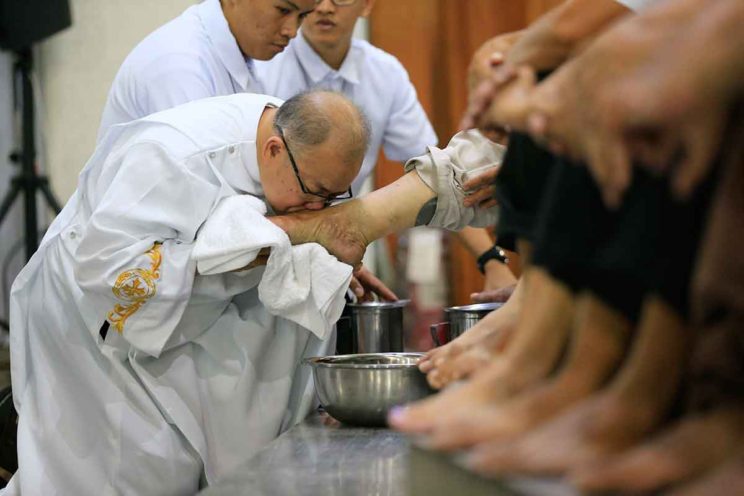 A priest kisses the foot of a worshipper during Holy Thursday Mass at a church in Manila, Philippines. (CNS photo/Romeo Ranoco, Reuters)

When the English text of the liturgical books was revised, the Nicene Creed expressed our faith that God the Father is the maker of all things “visible and invisible”.

This was preferred to all things “seen and unseen”, on the grounds that something unseen could be hidden from the viewer but easily seen to be there from a different angle.

The solemn liturgy of Holy Week, and particularly the Sacred Triduum of Holy Thursday, Good Friday and the Easter Vigil, is not far away.

Because of its solemnity and rich symbolism, it needs to be seen as well as heard by congregations, which are generally bigger than the average number attending Sunday Masses.

If the people in the pews cannot see the liturgical action clearly, or hear the prayers satisfactorily, they can miss out on the significance of the traditional liturgical rites that serve to bind Christ and his Church in the closest way possible.

It is always useful to have a commentator to offer short explanatory details of the action that is unfolding before them and in which they are taking an active role.

If the priest and ministers know what they are doing and the significance of each step of the way, the congregation will pick up the sense of the spiritual journey as the rite follows the passion and death of Jesus Christ. 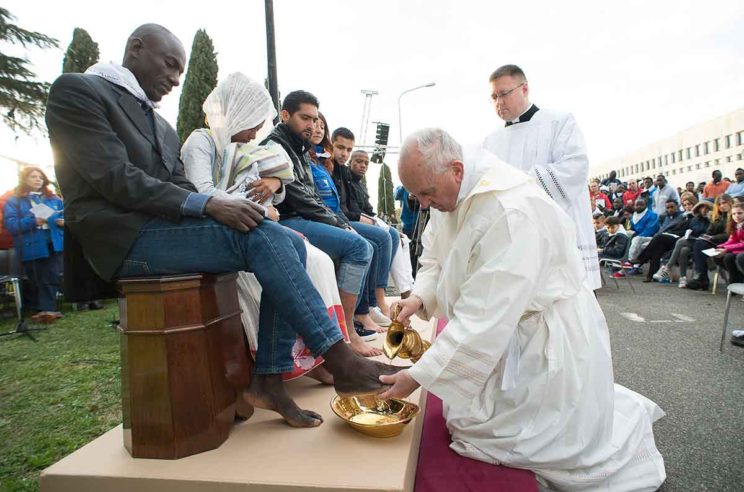 Pope Francis washes the foot of a refugee during Holy Thursday Mass of the Lord’s Supper at the Centre for Asylum Seekers in Castelnuovo di Porto, about 15 miles north of Rome. The pope washed and kissed the feet of refugees, including Muslims, Hindus and Copts. (CNS photo/L’Osservatore Romano, handout)

When the celebrant prostrates himself at the altar steps on Good Friday and slowly unveils the cross as he mounts the steps, the serious moments of Jesus’ crucifixion and saving death can be fruitfully and effectively conveyed without any dramatic exaggerations or play-acting.

The foot-washing ceremony on Holy Thursday is perhaps one of the most meaningful of the Sacred Triduum’s liturgical moments. It has been made even more significant now.

In January, Pope Francis ordered a change in the rubrics of the rite. He declared that he wanted to improve the procedure in order to fully express the meaning of what Jesus did in the Upper Room, giving of himself “to the very end” for the salvation of the world.

Up to that point the candidates chosen for the foot-washing at the Mass of the Lord’s Supper were all male. In future that will not apply and anyone may be chosen, male, female, young, old, healthy and sick, clerics and consecrated men and women.

Pope Francis made it plain that these chosen few (no number was mentioned) must be given an appropriate explanation of what the foot-washing rite means.

The simple little dramatic observance forcefully reenacts our Lord’s gesture of humility when he washed and dried the feet of his apostles on the night he was betrayed.

He said: “You call me Teacher and Lord, and you are right, for so I am. If I then, your Lord and Teacher, have washed your feet, you also ought to wash one another’s feet. For I have given you an example, that you also should do as I have done to you” (John 13:12-14).

Christ’s words are not directed only to the bishops or priests who perform the rite and who must conform themselves to Christ who came not to be served but to serve. They are meant to move the hearts and souls of every disciple of Jesus without exception.

The foot-washing is not obligatory at the Mass of the Lord’s Supper. Pastors have to decide according to the circumstances and needs of the parish.

But when it can be done, it should be done. Jesus instituted the Eucharist and the order of priesthood on Holy Thursday. At the same time he made the foot-washing the lesson to be learned by all who have since gathered around the altar in commemorating that sacred night.

Pastors can choose anybody to participate in the foot-washing ceremony. Those who share in it represent the entire People of God, and this should be highlighted in the homily of the Mass.

For maximum spiritual enrichment, this is a moment that every soul in the congregation should be able to see and appreciate. Those responsible for the Holy Week ceremonies should do their very best to ensure this.