A Long Line of Holy Catechists have Served the Church 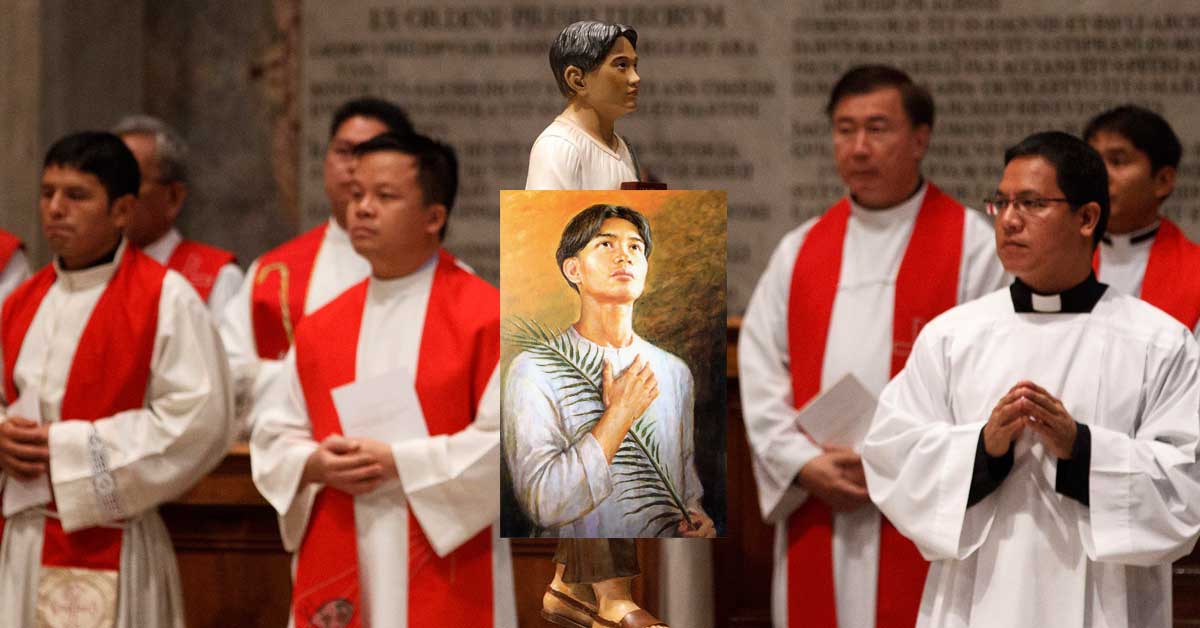 A statue of St Pedro Calungsod, a lay catechist from the Philippines who was martyred in Guam in 1672, is seen during a Mass of thanksgiving for his canonisation, in St Peter’s Basilica at the Vatican Oct. 22, 2012. Instituting the ministry of catechist, Pope Francis pointed to the number of lay catechists declared martyrs, blesseds or saints by the church. (CNS photo/Paul Haring). (Inset) A painting of St Pedro Calungsod shows him holding a palm frond. The young missionary catechist from Cebu, Philippines, was martyred the day before Palm Sunday in 1672 in Guam. (CNS photo/courtesy of Cebu Archdiocesan Shrine of Blessed Pedro Calungsod)

By Cindy Wooden – Throughout history and across the globe, lay catechists have been revered as saints, and many were martyred for their refusal to renounce their faith and their vocation to teach the Christian faith to others.

Formally instituting “the ministry of catechist” with a document published May 11, Pope Francis praised “the countless lay men and women who directly took part in the spread of the Gospel through catechetical instruction.”

“Men and women of deep faith, authentic witnesses of holiness,” he said, some of those catechists founded churches and “eventually died as martyrs.”

“The long line of blesseds, saints and martyrs who were catechists has significantly advanced the church’s mission and deserves to be recognised, for it represents a rich resource not only for catechesis but also for the entire history of Christian spirituality,” Pope Francis wrote in the document, “Antiquum Ministerium” (Ancient Ministry).

The brief document did not mention any of the beatified or canonised lay catechists by name, but many of the Catholic communities they served continue to honour them and keep their memories alive.

A catechist from the United States may soon be added to their ranks. The U.S. bishops in November gave their formal support to the sainthood cause of Nicholas W. Black Elk, a 19th-century Lakota catechist who is said to have introduced hundreds of Lakota people to the Catholic faith.

An already-canonised catechist and martyr with a more remote U.S. connection is St Pedro Calungsod, a teenage Philippine catechist who accompanied Jesuit priests to the Mariana Islands in 1668 and was martyred in Guam in 1672.

In late April, the Catholic Church in Guatemala celebrated the beatification of the 10 martyrs of Quiché, three priests and seven laymen killed between 1980 and 1991. Six of the seven laypeople were catechists, including 12-year-old Juan Barrera Méndez, who helped prepare younger children for their First Communion. Captured by soldiers during a prayer meeting they believed was a meeting of leftist guerillas, the boy was tortured and then shot in 1980.

In 2002, St John Paul II celebrated the beatification of 16-year-old Daudi Okelo and 12-year-old Jildo Irwa, catechists who volunteered in 1916 to travel into a neighbouring region of Uganda to teach the faith to the local people. But during an uprising against colonial rule, the boys were seized and threatened with death unless they stopped teaching. When they refused, they were stabbed to death with spears.

Sainthood processes also are underway for catechists martyred in the 20th century in El Salvador and in Mozambique.