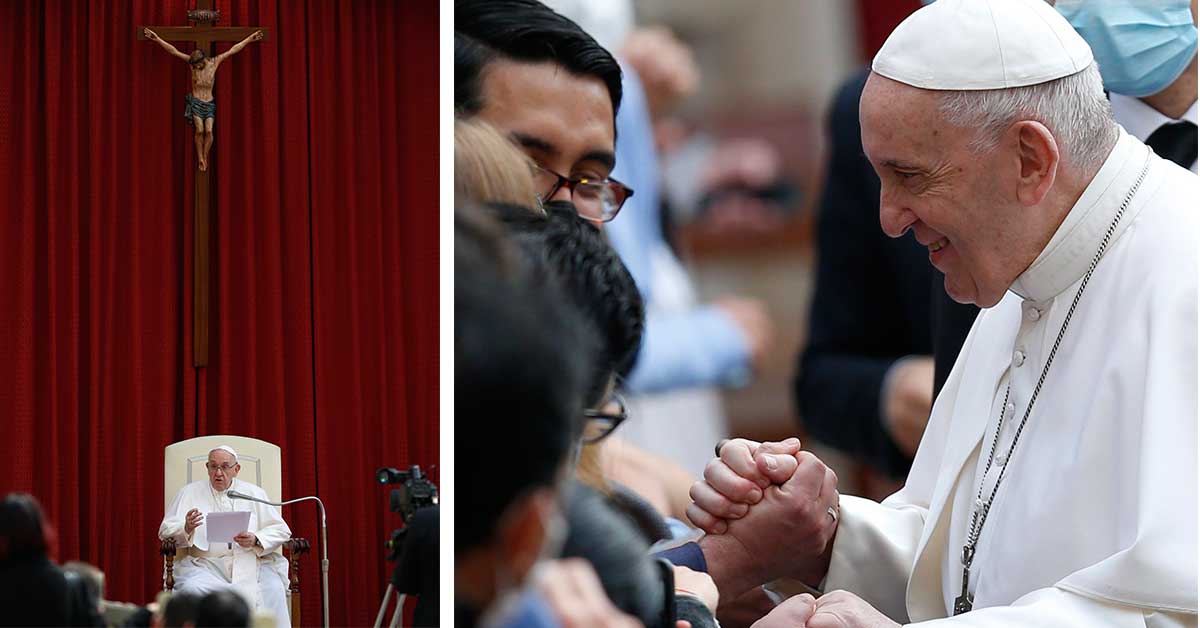 Pope Francis speaks during his general audience at the Vatican on June 9, 2021. (Left) The pope greets people in the San Damaso Courtyard of the Apostolic Palace. (CNS photo/Paul Haring)

By Carol Glatz –  People need to find harmony between prayer and the demands of everyday life, Pope Francis said.

“It is inhumane to be so absorbed by work that you can no longer find the time for prayer. At the same time, prayer that is alienated from life is not healthy,” the pope said on June 9 during his weekly general audience.

“The time dedicated to being with God revives faith, which helps us in the practical realities of life, and faith in turn nurtures prayer without interruption,” he said.

The audience was held in the San Damaso Courtyard of the Apostolic Palace, where the pope spent the first 30 minutes chatting at length with individuals, blessing them or objects they had brought, signing books and greeting children. While the pope was maskless, attendees were obliged to wear masks, but many ignored social distancing rules when they crowded along the barricades to greet and speak with Pope Francis.

In his main audience talk, the pope continued his series on prayer by looking at the importance of perseverance and praying unceasingly.

How is it possible to remain in a constant state of prayer, especially when people’s lives are busy or filled with disruptions or distractions? the pope asked.

One tradition offers something called a “prayer of the heart” and is based on repeating with faith the words, “Lord Jesus Christ, Son of God, have mercy on me, a sinner,” until these words match the rhythm of breathing, and it is spread throughout the day, he said.

“Indeed, we never stop breathing, not even while we sleep, and prayer is the breath of life,” he said.

Having a heart in a constant state of prayer, he said, is like having a flame perpetually lit even while carrying out daily tasks, taking a walk or standing in line. Even short, brief prayers, like “Lord, have pity on us” or “Lord, help me” are enough, he added.

“Prayer is a kind of musical score, where we put the melody of our lives,” he said.

Prayer, then, is not meant to clash with everyday duties and obligations because it acts as “the place where every action finds its meaning, its reason and its peace,” he said.

It is not easy to do, Pope Francis said, but just remember “that God, our Father, who must take care of the entire universe, always remembers each one of us. Therefore, we too must always remember” and find time for him.

Work and prayer are complementary, he said, like the symmetry of the human body with its two hands, eyes and ears.

So, while it is inhumane to have to work so much that it leaves no time for prayer, he said, it is likewise harmful to live a life of prayer alienated from real life. In that case, prayer becomes “spiritualism, or worse, ritualism.”

Remember, he said, that Jesus did not stay forever in his glory on Mount Tabor but came down from the mountain with his disciples to resume his daily journey.

Prayer revives faith, which supports daily life and nurtures prayer, making a positive feedback loop keeping “alight that flame of Christian life that God expects of us,” he said.