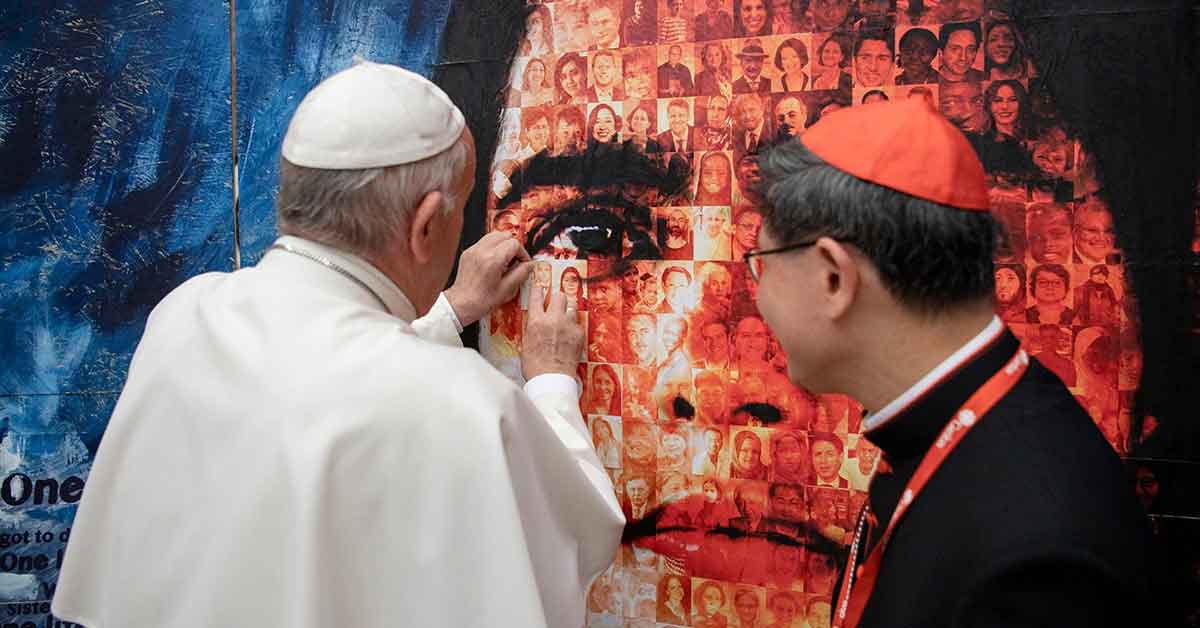 Pope Francis places a picture of his parents onto the “Share the Journey” photo mosaic during an audience with delegates attending the general assembly of Caritas Internationalis, at the Vatican. (CNS photo/Vatican Media)

By Carol Glatz  – Poverty is the result of people’s selfishness; it is not “fate” or the fault of the poor, Pope Francis said.

“Unless we choose to become poor in passing riches, worldly power and vanity, we will never be able to give our lives in love; we will live a fragmented existence, full of good intentions but ineffective for transforming the world,” the pope said in a message for the World Day of the Poor.

“We need, therefore, to open ourselves decisively to the grace of Christ, which can make us witnesses of his boundless charity and restore credibility to our presence in the world,” the pope said in the message dated June 13, the feast of St Anthony of Padua, patron saint of the poor. The Vatican released the message to the public on June 14.

The World Day of the Poor – marked each year on the 33rd Sunday of Ordinary Time – will be celebrated on November 14 this year and focuses on a verse, “The poor you will always have with you” (Mk 14:7).

However, people must never become indifferent knowing there will always be poverty in the world and among their neighbours, the pope said.

Jesus always sides with the poor and he “shares their lot,” he said.

“This is a powerful lesson for his disciples in every age,” he said, because it calls people to directly engage in “a mutual sharing of life” with the poor, who are not “outside our communities, but brothers and sisters whose sufferings we should share in an effort to alleviate their difficulties and marginalisation, restore their lost dignity and ensure their necessary social inclusion.”

“Mutual sharing generates fraternity” that is enduring, it strengthens solidarity and it lays the necessary foundations for achieving justice, he said. Almsgiving, on the other hand, is only occasional and “risks gratifying those who perform it and can prove demeaning for those who receive it.”

Of the many saints who lived this mutual sharing with the poor, he said, is St Damien of Molokai, who died of Hansen’s disease in 1889 after spending the last 16 years of his life caring for people with the disease, who were permanently quarantined in Kalaupapa on the Hawaiian island of Molokai.

“His testimony is most timely in our own days, marked by the coronavirus pandemic,” the pope said, adding that God’s grace is at work in “all those who, without fanfare, spend themselves for the poorest, sharing with them in concrete ways.”

A disciple of Christ chooses not to accumulate “earthly treasures, which give the illusion of a security that is actually fragile and fleeting. It requires a willingness to be set free from all that holds us back from achieving true happiness and bliss, in order to recognize what is lasting, what cannot be destroyed by anyone or anything,” Pope Francis said.

Also, Christians must recognise all the different and “excessive forms of moral and social disorder that are generating ever new forms of poverty,” he said.

Unfortunately, he said, there is a growing notion that the poor are responsible for their condition, and they are “an intolerable burden for an economic system focused on the interests of a few privileged groups.”

An economic system that picks and chooses from or completely ignores ethical principles and “unscrupulous economic and financial actors lacking in a humanitarian sense and in social responsibility” are all contributing to creating “inhumane conditions for people already in precarious situations,” he said.

“Individualistic lifestyles are complicit in generating poverty, and often saddle the poor with responsibility for their condition. Yet poverty is not the result of fate; it is the result of selfishness,” the pope said, which is why development and policies must value the abilities and participation of everyone, especially the poor.

Christ can be found in the poor, and, therefore, their material poverty “should motivate us to creative planning, aimed at increasing the freedom needed to live a life of fulfilment according to the abilities of each person,” the pope said.

The World Day of the Poor, he said, should help local churches evangelise by meeting the poor personally wherever they may be.

“We cannot wait for the poor to knock on our door; we need urgently to reach them in their homes, in hospitals and nursing homes, on the streets and in the dark corners where they sometimes hide, in shelters and reception centres,” Pope Francis said. “It is important to understand how they feel, what they are experiencing and what their hearts desire.”

Archbishop Rino Fisichella, president of Pontifical Council for Promoting New Evangelisation, told reporters that the council was developing new ways to involve as many people as possible in the World Day of the Poor as measures to control the pandemic evolve.

The pope will celebrate Mass in St. Peter’s Basilica on Nov. 14, but the council cannot say yet how many people will take part and or what other activities will take place at the Vatican. Before the pandemic, the pope would have lunch with thousands of Rome’s poor and the Vatican would set up medical tents and mobile clinics for free services. Last year, 5,000 food parcels and 350,000 masks were distributed to those in need.