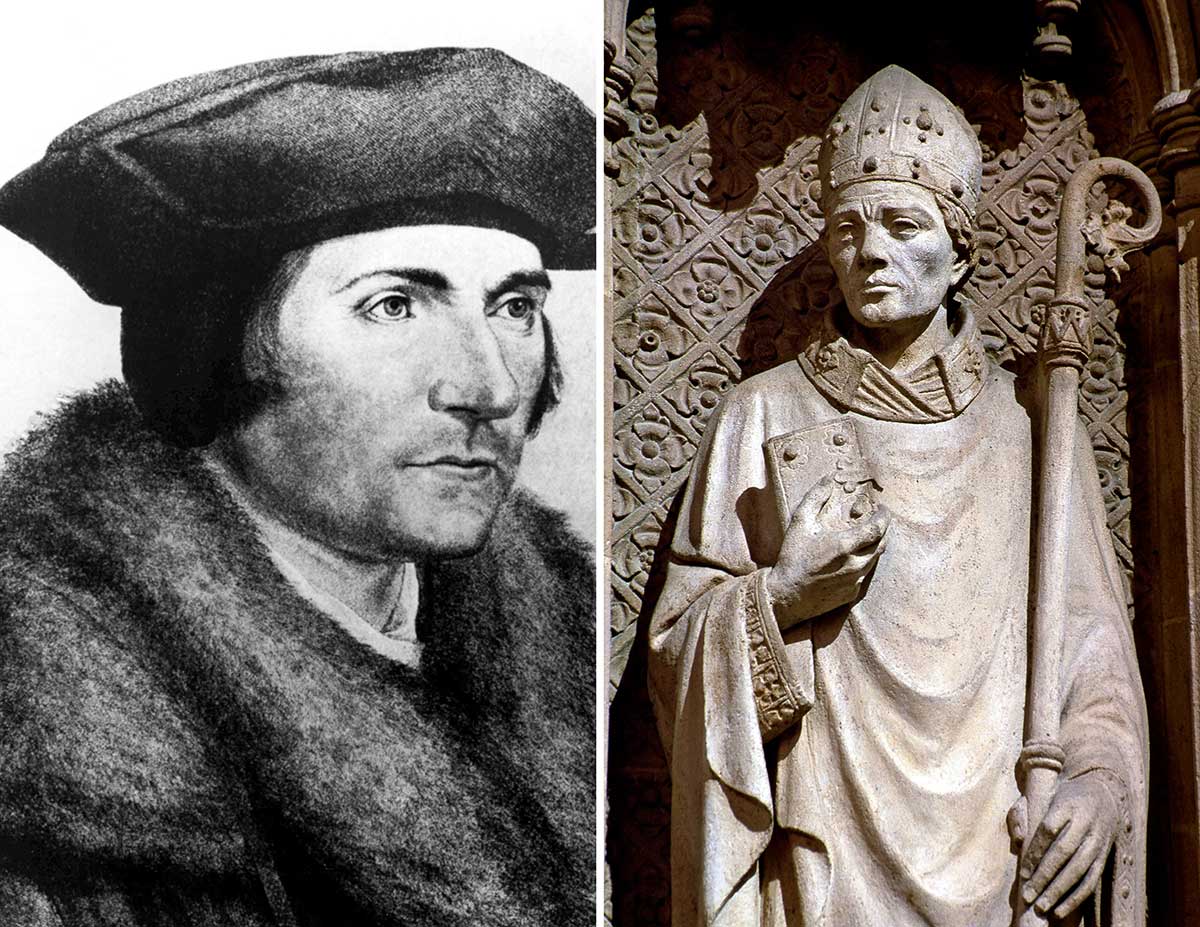 The likeness of Ss Thomas More and John Fisher are seen in a composite photo. The U.S. Conference of Catholic Bishops’ 2021 observance of Religious Freedom Week begins June 22, the feast day of the two saints, and ends June 29, the feast of Sts. Peter and Paul. (CNS composite; photos by Catholic News Service file, and The Crosiers)

The feast of Saints John Fisher and Thomas More is observed as an optional memorial on June 22. So that our readers don’t have to fish for more information, CNA has compiled a question-and-answer lowdown on their lives and legacies:

Who was St. Thomas More?

St Thomas More (1478-1535) was a humanist and intellectual – he worked as a lawyer and explored theology through his written works, many of which were defences of the Catholic faith against heresy. He studied at Oxford and briefly considered religious life, but he eventually followed a vocation to marriage and fatherhood.

More was appointed by King Henry VIII to be Lord Chancellor of England in 1529.

What does “Lord Chancellor” mean?

The “Lord Chancellor” was the highest-ranking member of the King’s cabinet. This role was commonly filled by a clergyman. Historically, the role entailed great judicial responsibility – its influence has evolved to scale back on this particular front.

How did he manage to get on Henry VIII’s bad side?

St Thomas More stood firmly in his Catholic faith when Henry VIII began to pull away from the Church.

In May 1532 Henry pressured the English synod, the Convocation of Canterbury, to submit the clergy’s authority to his own. The day after the convocation agreed to Henry’s terms, More resigned as Lord Chancellor.

More wished to retire from public life, but when he refused to assent to the Act of Supremacy 1534, which repudiated the pope’s authority over the Church in England, he was imprisoned on charges of treason.

He was sentenced to execution, which took place July 6, 1535.

Why is he a saint?

More’s persistence to remain sided with the Church rather than the king, ending in martyrdom, was a testament to his tireless devotion to God’s law. He was canonized by Pius XI in 1935, and was named patron of statesmen and politicians by St. John Paul II.

I’ve heard something about his beard…?

The story with St. Thomas More’s beard is that he laid his beard outside of the execution blade’s path in one final, humorous gesture.

His last words were,“This hath not offended the King,” implying that while his head had angered Henry VIII, his beard was innocent and did not deserve to be severed.

Who was St John Fisher?

St John Fisher (1469-1535) was ordained a priest when he was about 22, and was appointed Bishop of Rochester in 1504. He lived an intentionally simple lifestyle and was an intellectual. He studied theology at Cambridge, where he became chancellor. Among his writings is a commentary on the seven penitential psalms.

His mission as a bishop was to perfect how the Church’s teachings were conveyed by his diocese. Fisher spent much of his time travelling to parishes with the mission of theologically correcting and realigning clergy. He also wrote various apologetic defences in response to Martin Luther.

What did he have to do with the whole Henry VIII situation?

St John Fisher studied Henry’s request for a declaration of nullity, but could not find grounds for such a declaration.

He refused to assent to the Succession to the Crown Act 1533, which recognised the king’s supremacy over the Church in England and declared the daughter of Catherine of Aragon illegitimate, and was imprisoned for treason in April 1534.

Fisher was jailed, starved and deprived of all sacraments, but he didn’t budge on his position.

Fisher was made a cardinal in May 1535, in the hopes that Henry would not dare execute a prince of the Church.

Please don’t tell me it ended like More’s story…

It didn’t. There was no beard on the line.

However, Fisher was executed, head on the chopping block and all. He removed his hair shirt, and said the Te Deum and Psalm 31 right before giving his life for the kingdom of God and the honour of the Church, June 22, 1535. He is the only cardinal to have been martyred.

Why is Fisher a saint?

Same deal as More – he stuck to what he knew to be the truth and died for it. He was canonised with More in 1935 by Pius XI.

But he’s not nearly as well-known as St Thomas More!

No, he’s not. St. Thomas Fisher’s grave, which also contains the bones of More, doesn’t even bear his name. But he did it for the glory of God.