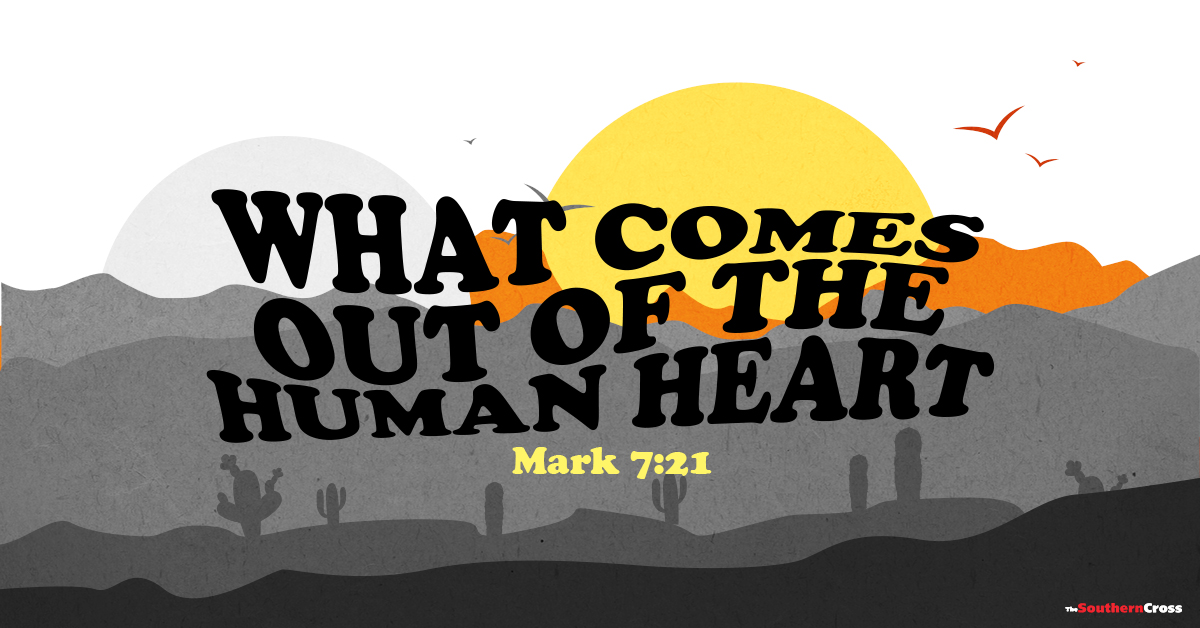 To witness, to see, to stand in the presence of unthinking, unreasoning and unholy actions, leaves us stunned, stammering for motives and understanding. We may cling to our old worn platitudes, to excuses, to our personal innocence, disassociation, yet, like a virus, these actions infect whole communities, peoples and even nations. These are the actions of death, and death itself ultimately leaves us speechless.

Uncleanness is like an infection: the whole group suffers because of the carelessness and lack of group awareness.

Each hearer of the gospel must ask how my individual actions have not only damaged me as an individual but have had the effect of making the whole community unclean, unholy, unfit to stand before the world as the Body of Christ.

Jesus gives us a list of 12 such actions and motivations that effect the community; among them: avarice, malice, deceit, indecency, envy, slander, pride and folly; we could spend months studying this list and their affect on our community.

Pride interwoven with a sense of victim-hood is the source of jealousy, envy, malice, deceit, gossip and the destruction of a community. The fruits of pride are hatred, hurt, doubt, despair, darkness and sadness. Dante’s definition of pride was ‘love of self, perverted to hatred and contempt for one’s neighbour.’
But there is another type of evil that is more insidious and lies much closer within each one of our hearts and which St Augustine termed the ‘absence of good’.

Hannah Arendt coined a term for this; ‘banality of evil’, as she struggled to come to grips with the utter destruction of European society. In her book ‘Eichmann in Jerusalem: A Report on the Banality of Evil’, Arendt tried to tackle a string of questions not necessarily answered by the justice system: Where does evil come from? Why do people commit evil acts? How are those people different from the rest of us?

Her conclusions were profound. People who do evil are not necessarily monsters; sometimes they’re just unthinking bureaucrats. The Eichmann she observed on trial was neither brilliant nor a socio-path. He was described by the attending court psychiatrist as a ‘completely normal man.’

Evil is extraordinary acts committed by otherwise unremarkable people. Like Augustine, she saw that only good had any depth. Good can be radical; evil can never be radical, it can only be extreme, for it possesses neither depth nor any demonic dimension, and this is its horror!

It can spread like a fungus over the surface of the earth and lay waste the entire world. Evil comes from a failure to think. It defies thought for as soon as thought tries to engage itself with evil and examine the premises and principles from which it originates, it is frustrated because it finds nothing there. That is the ‘banality of evil’.

Discovering how easy it is for each one of us to slip into the ‘banality of evil’ is something that takes most people by surprise: and it is a lesson we have to learn over and over again.

Discovering the ‘deeper’ meaning of the gospel as opposed to a trite message that suits us can also be a painful surprise. The Gospel warns us about reading the message through our cultural and ethnic prejudices; against judgements being passed by an elite who are isolated from the reality of people’s lived experiences.

We are warned about disregarding the first and only commandment of universal love and compassion; ignoring the hidden horrors of sexism, racism, elitism, cultural imperialism and religious intolerance; all these evil things which come from within the worst of the human heart and make humanity, make our community unclean.