This was Dominican Sister Aiden Quinlan 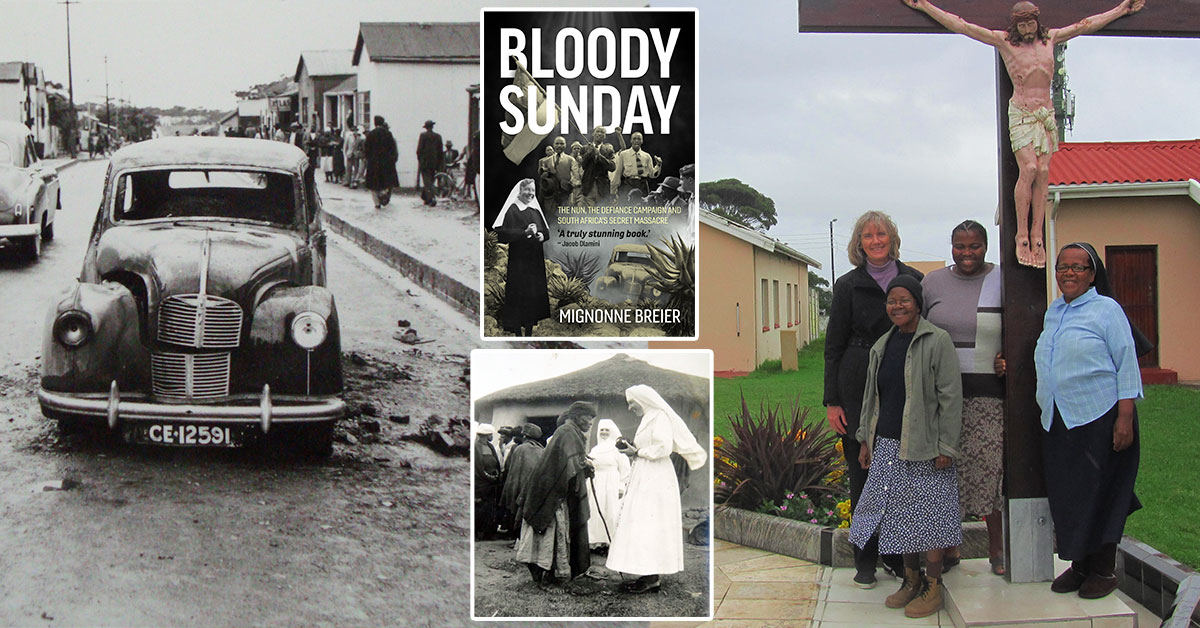 From left: Sr Aidan’s burnt-out car after she was killed by a mob on November 9, 1952 • The cover of Mignonne Breier’s book Bloody Sunday • Sister Aidan visiting women in the Glen Grey area • Mignonne Breier with Dominican sisters at the memorial to Sr Aidan at St Peter Claver parish in Duncan Village, East London.  They are (from left): Sr Salesia Ndzimande, Mignonne Breier, Sr Nobulali Bulurelo and Sr Avellina Siya. Sadly, Sr Salesia passed away in December 2020.

In her new book Bloody Sunday, MIGNONNE BREIER investigates the mob killing of a Dominican Sister in 1952, and the circumstances that led to it. Here, the author recalls the life of Sr Aidan Quinlan.

Dominican Sister Aidan Quinlan was an extraordinary woman for her time, and she might have been more widely known were it not for her particularly brutal murder and the police massacre that followed it in 1952. This is the central thesis of my book Bloody Sunday: The Nun, the Defiance Campaign and South Africa’s Secret Massacre (newly published by Tafelberg).

Sr Aidan, also known as Dr Elsie Quinlan, was killed during an uprising in Duncan Village, East London, on Sunday, November 9, 1952, at the height of the Defiance Campaign led by the African National Congress (ANC).  Prior to her killing, police took exception to a legal meeting organised by the local ANC Youth League and used batons, bayonets and gunfire to disperse the crowd. At least eight people were killed and 27 injured before the police withdrew.

Groups of mainly youths then rampaged through the township, venting their anger on symbols of white control. One group beat to death with sticks a white insurance salesman, Barend Vorster, who had come to the township to collect his dues. Another group set upon Sr Aidan when she drove into Bantu Street, near the site of the meeting.

The Irish-born Sister was a medical doctor who ran a clinic at St Peter Claver mission in Duncan Village, about 2km from the place of her death. Sr Aidan lived at the mission with seven other Sisters — five African and two German. These Sisters managed to escape with the police before rioters looted and set fire to the mission after shouting “Kill the Romans”.

It is believed that Sr Aidan drove into the area, which she usually avoided at weekends, to help the wounded. She was assaulted, stabbed and set alight in her car. Her body was then dismembered, leaving only her torso, part of her head and the stump of one arm. According to subsequent court and oral evidence, her flesh was consumed, either then and there or taken away for muthi by people who believed that by doing so they would gain some of her strength.

A reign of terror followed. Police drove through the township in troop carriers, shooting into and between the densely populated, flimsy houses for hours. Reliable press and police sources put the death toll that day at “at least 80”, rising to more than 200 if one takes account of the injured who died subsequently. Most were buried informally by their families who feared arrest if they appeared at the hospital or mortuary. Thousands fled into the rural areas to escape the wrath of white East London. The authorities covered up the massacre, admitting only to the eight people who were killed when they dispersed the ANC meeting. Four men were convicted and executed by hanging — two for the death of Vorster and two for the death of Sr Aidan.

The riots received widespread press coverage initially, but are barely mentioned in histories of the time. It was in the interests of both the apartheid government and the ANC to suppress the facts — there had been appalling violence on both sides. In the process, the lives of an untold number of people — including an extraordinary nun — were hidden from history.

Who was Sr Aidan?

Sr Aidan grew up in Ireland. She was born in 1914 in what is now called Ballydesmond, and went to school in Blarney and Cork City. She decided to become a nun after completing her Bachelor of Science degree at the University College Cork. Although she became devoutly religious in time, she was not particularly religious when she expressed her vocation, to the surprise of her family. At the time there were few opportunities in Ireland for young women, apart from marriage and the religious life. Missionary work appealed to the adventurous young woman.

In 1938 she travelled to King William’s Town in the Eastern Cape, to join the Congregation of Dominican Sisters of St Catherine of Siena, commonly known as the “King Dominicans”. The congregation originated in Germany and was founded in 1877 to serve German settlers in the Eastern Cape, primarily as teachers. In 1940 Sr Aidan was sent to Wits University to study medicine, along with the German Sr Amanda Fröhlich.

Sr Aidan worked at Glen Grey Hospital in Lady Frere and the Far East Rand Hospital in Springs before she was sent to St Peter Claver mission in Duncan Village in 1949 to open a clinic.  Public health conditions at the time were dire. East London had the second-highest rate of tuberculosis infection in the world, second only to Port Elizabeth. There was a high fertility rate among African women, but every second child born died within the first year of life. There was only one municipal clinic to serve the entire location and the “Non-European” wing of Frere Hospital was notoriously overcrowded.

Against these odds, Sr Aidan, helped by only one nursing assistant, Sr Gratia Khumalo OP, battled to provide relief to the suffering in a one-room clinic.  In 1949, according to the King Dominican records, Srs Aidan and Gratia attended to 5299 patients; in 1950 the total was 20006; and in 1951 it was 17240, even though Sr Aidan went abroad during this year. On the Friday before she died, 170 patients attended the clinic. When the Sisters arose at 5:30, they would find patients already waiting outside the clinic. Many were mothers with children.

In Sr Gratia’s view, Sr Aidan’s greatest achievements lay in her ability to help infertile women fall pregnant. Women travelled from as far as the Free State and Lesotho to consult her. By prescribing pills and a tonic, she “brought peace to families” where the wife’s infertility was an issue. “Her gift for helping women to conceive and fall pregnant was known far and wide,” and there were many babies who owed their existence to Sr Aidan’s treatment, Sr Gratia later wrote. What the medicines contained, she did not say.

It was a source of distress to Sr Aidan that many of her patients were brought to her when they were already close to death. Patients would try traditional healers and African doctors first, and come to her only when their treatments failed. If she was unable to treat them, she would call the mission priest, Fr John O’Malley, to come and baptise the patient; if he couldn’t come in time, she would perform the rites herself. Often the patient was already dead and had to be baptised in extremis. When mothers of sick babies did not turn up at the clinic at appointed times, Sr Aidan worried that the babies might die without being baptised, and visited their homes in the evening.

The African Sisters who lived with Sr Aidan at Duncan Village wrote detailed accounts of her after her death.  They all remarked on her “simplicity and humility” and the way she “was kind to everyone and treated all the same”. She attended recreation with the other Sisters in the evening and often took the African Sisters to the beach with her at the weekends. She also picnicked with African Sisters at Glen Grey. Such socialising was unusual for the congregation at the time.

The district surgeon who worked with her at Glen Grey noted her brilliance as a medical doctor, her keen sense of humour, down to earth personality, “motherly charity” and love for motor cars and driving.

Not everyone in Duncan Village liked Sr Aidan, however. Sr Gratia said Sr Aidan would ask all her patients whether they went to church, and some resented this. There were doctors and nurses in the location who were jealous of her because “she had 20 times as many outpatients as they had”, and her fees were lower than theirs. She raised funds from various sources and did not charge patients for consultations, only for medicines. There were also reports of more general resentment in the community against the Catholic Church at the time.

According to the African Sisters’ accounts, Sr Aidan took her religious duties seriously and spent a great deal of her days in prayer, both on her own and in common with others. In the clinic she kept a crucifix and a statue of St Martin de Porres, and often prayed to both. When dealing with a difficult medical case, she would put her hands over her face and pray. She died clutching her rosary. I have no doubt that she was following her vocation when she drove into Duncan Village on that November 9, 1952, to meet her fate.

The family and King Dominican congregation were inundated with condolences after Sr Aidan’s death. Many described Sr Aidan as a martyr of the faith and expressed hope that the Catholic Church would recognise her as such.

Some said they were already praying to her rather than about her.

Mignonne Breier is a former journalist, lecturer and researcher. She retired from the University of Cape Town in 2019 and now writes full time. Bloody Sunday is available at good bookstores.