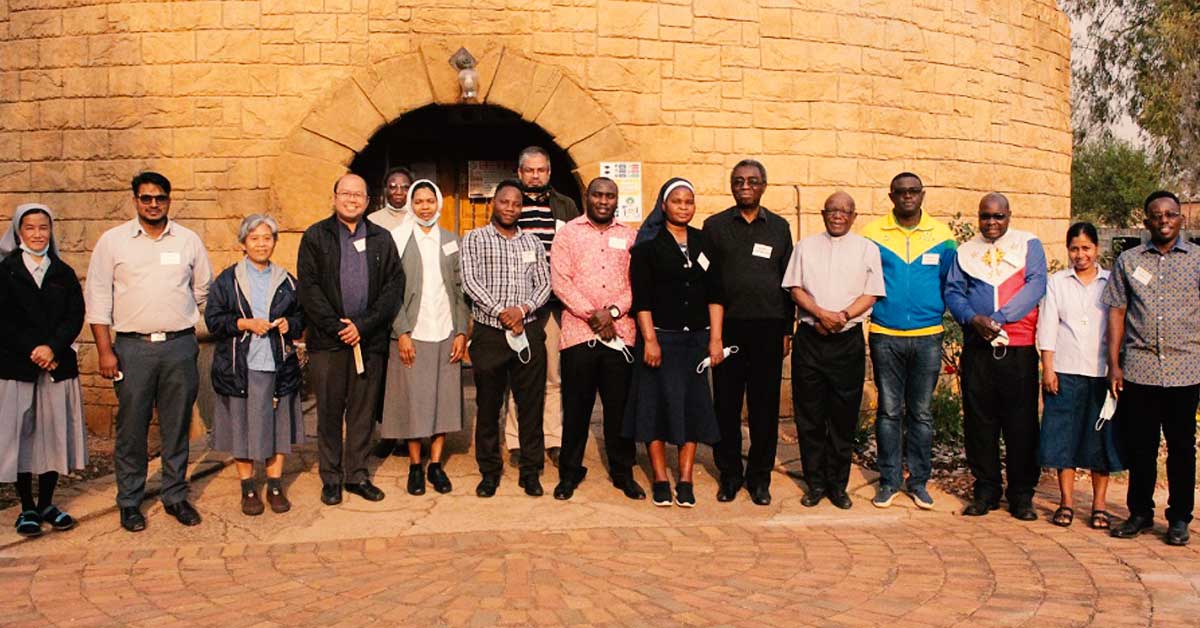 Archbishop Buti Tlhagale with the new missionaries in Benoni

By SACBC – Speaking to a group of new missionaries at the orientation programme in Benoni, the Archbishop of Johannesburg, Archbishop Buti Tlhagale, said though challenges facing the Catholic Church in South Africa are many, the major challenge to total conversion to Christianity is the belief in the ancestral cult.

He mentioned the lack of equality, poverty and development, especially in the political sphere as some of the other challenges. “There is still a lot of racism in South Africa, it is always under the carpet, below the surface,” said the Archbishop, adding that it is partly because the minority is doing well and the majority are doing badly.

The Archbishop said he sees a lot of young people in Johannesburg going mad because of the dire situation they are facing due to realities like unemployment. “They sleep on the streets, they lose their dignity, they beg for food, and eventually you can see that there’s something abnormal about their behaviour,” said Archbishop Tlhagale.

He pointed out that apart from material problems there’s a lot of brokenness amongst the people of South Africa which results in a loss of hope.

The Archbishop questioned the role of the laity in the society at large, wondering whether they go out to make an impact in society, motivated by their faith to try and change society and its expectation. He advised that what we need is the deepening of faith, something that is mentioned a lot.

Archbishop Tlhagale alerted the missionaries that they must be aware most Catholics are influenced by protestants simply because of their huge presence in any community. “Simple things like hymns”, He noted, “you find suddenly Protestant tunes in the Catholic Church.”

He noted that the influence is so great that it goes to point of many Catholics not seeing the difference between the Catholic Church and other churches, that they can easily receive communion from those other communities.

He went back to what he said is the major obstacle to total conversion, the ancestral cult, noting that people ubiquitously believe in the presence of ancestors. To make the missionaries understand something concrete with regard to the ancestral cult, Archbishop Tlhagale showed them a video of a trainee sangoma (traditional diviner/healer).

The video was of a Catholic who became a sangoma recently and the Archbishop was trying to show them that everyone is into this  – even Catholics of all walks of life. He said this traditional religion is mixed with Christianity even by some priests and nuns.

He also noted it is a religion taking the place of our religion, even though some think they can mix the two. “It is so deeply rooted that some people think other things can only be added upon it, as it is not believed that it can be removed,” said Archbishop Tlhagale.

He observed that people, Christians, seem to live comfortably with it as you are likely to find a traditional healer every second or third street in townships. “Where does Christ come in?”, asked the Archbishop, noting that some people impose the Judeo-Christian God on their ancestral calling to make it relevant.

He said people do these things sometimes as a way of double insurance. Archbishop Tlhagale said it is because of this double-dealing that he assumes that our conversion to Christianity is incomplete.

He advised that there should be more emphasis put on adult catechism which is almost non-existent. The Archbishop said people need to start reading and studying their faith and stop learning about their faith only when they prepare for confirmation.

The SACBC orientation programme for new missionaries aims to give missionaries the opportunity to be exposed and reflect on some key mission or missionary documents of the church and clarify for them the challenges and implications of being in a new mission context is different from the one they have been used to.