Be healed by God’s Word and Hand: 23rd Sunday 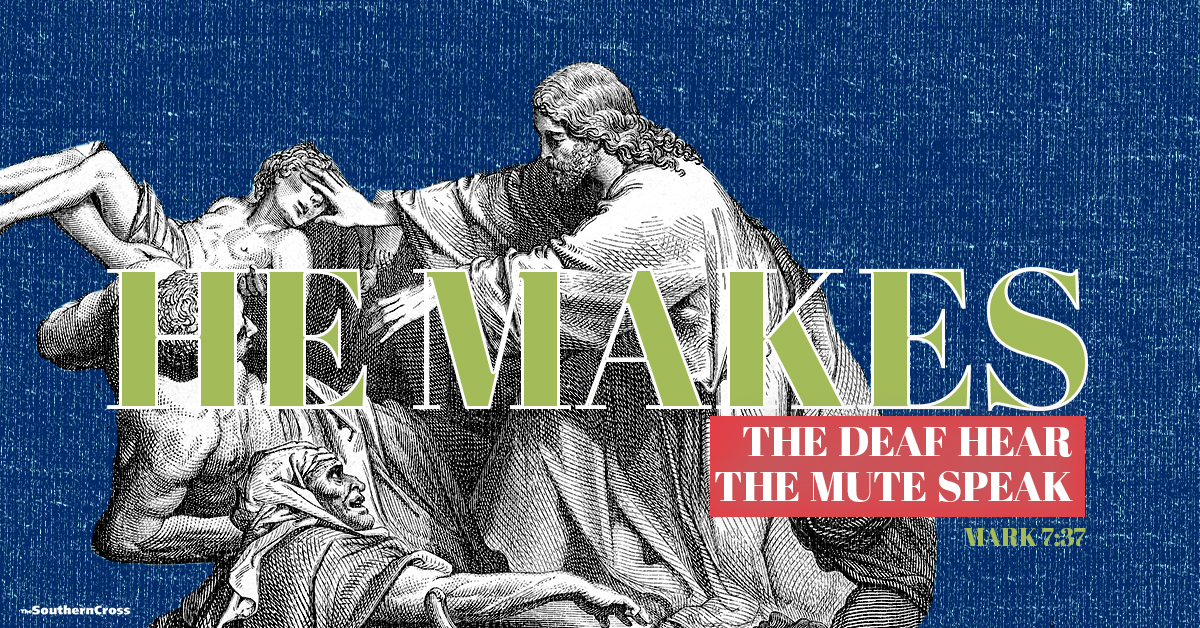 SERMON AND CHRISTIAN ACT IN THE WORD

Point of Reflection: The readings of this Sunday concentrate on the theme of God’s graciousness, which finds expression in various acts and forms of gratuitous and unmerited favour shown to believers: God’s Favour at Work! Be healed by God’s Hand.

Sermon (Reflection):  The Scriptural readings of this Sunday teach that God continuously bestows favours on his people. Isaiah understood God’s favour as the restoration of the nation to its glory in unity with God. James spoke against human favouritism and pointed out that only faith brings God’s favour upon a believer. Jesus shared his humanity with an afflicted man and brought God’s favour of healing upon him.

Receiving this divine favour through Jesus, and responding to his word of healing, the man was made capable of proclaiming that word to the world. Those who experienced God’s numerous favours can truthfully declare with the Psalmist, “The Lord made heaven and earth … he keeps faith forever”.

The first Scriptural reading (Cf. Isaiah 35:4–7 has offered a firm-hope-message with imaginative language in which Isaiah reassured the people amid their desolation, that God will not abandon them in these desperate times. He will restore them and their lands. The physical restoration of the afflicted symbolizes the coming salvation. The prophet motivates the people to look forward to this restoration, because God’s favour rests on those who cling to him, and to hope, even in their darkest moments. Some of us are in dark moments today but God will not abandon us, all will go well we just need to trust in the Lord.

The second Scriptural reading from the letter of James addresses the question of favour and favouritism. The author’s community was afflicted by the vice of favouritism based on the diverse social and economic status of its members. In the ancient world, only a very few people were wealthy enough to wear fine clothes and golden jewellery. When such individuals appeared, they attracted attention and were given preferential treatment, such as the privilege of priority seating in the community assemblies. James points out that such treatment goes against Christian principles.

Favouring the wealthy community members and discriminating against the poor members amounts to “judging the poor”, since the latter are judged as inferior in their human worth and dignity.

In our communities, we might also be favouring the rich and neglecting the poor. We need to equally treat each and every person as we were all created in the image of God “Imago Dei”.

To counter these unacceptable notions and practices, James looks to faith as the criteria for evaluating the true value of a person. He points out that the materially poor often practice their faith in a more sincere and truthful manner. Such active faith accords a person a great dignity, that of being an heir to God’s kingdom. God’s favour rests on those who respond to him with faith, while human favouritism divides and destroys communities.

The cure of a deaf-mute man narrated in the Gospel passage took place in the Gentile lands, and the cured men was not a Jew. Mark wants to emphasize that Jesus’ mission was universal and extended beyond the ethnic boundaries of the Jewish nation. This healing is among the most detailed and dramatic miracles reported by the evangelists.

Jesus performs no less than six actions: taking the men aside, putting fingers into his ears, spitting, touching the tongue, sighing deeply, and finally commanding the ears and tongue of the man to “be opened”. There are four important elements to be noted in this detailed description.

First, Jesus touches the organs afflicted with the disease – the man’s ears and tongue. He also uses his own saliva. In antiquity, saliva was considered a healing agent. Ancient doctors and healers commonly used their own saliva to treat various diseases.

In this manner, Jesus acts as an ancient physician would. All these actions would have been recognised by the people of the region as an action of one of their own healers. But Mark also emphasises that Jesus establishes a physical contact with the man, as if he wanted to share his own ability to hear and speak with the one who was deprived of them.

Next, Mark writes that Jesus “sighed” towards heaven. Such a sigh was a gesture of prayer; an expression of Jesus’ call for divine power. He would heal the man with the power that comes from God. Unlike the ancient healers, who healed relying on their own skills and abilities, Jesus relies on God’s power to restore the man.

But the man was not healed by Jesus’ touch, he was healed by Jesus’ word – “Ephphatha” – “be opened”. Thus, the cure happened in response to Jesus’ word, not his touch. Jesus healed by a word of command which carried God’s healing power. By the Word of Jesus Christ we are healed in all our problems.

This unique healing reveals that Jesus in his human person involves himself completely in the restoration of a sufferer. Touching the man, Jesus established a physical bond, and began the process of healing. But the restoration of the man’s ability to hear and speak was a response to Jesus’ word. This word transmitted the divine power. Jesus reached up to heaven, to bring God’s favour upon the man through the power of his word.

The true restoration of this Gentile man consisted in him gaining the ability to hear the word of God, and subsequently proclaim it. Through his contact with Jesus, this once isolated individual became a channel of God’s communication to the world.

Mark emphasises that the healing took place between Jesus and the man alone. He probably implies that only a personal contact with Jesus will open a person to experience God’s restorative power. Such a contact cannot be established merely by hearing about, or even looking at, what Jesus does for another person. God’s favour is received by a personal contact with Jesus. Just open your heart my brother and sister, Jesus Christ will heal you.

Our world today seems to be filled with all types of sufferings, death, calamities, physical and spiritual illnesses, the unending pains of those sick of cancer and other diseases. These experiences can be frightening, and discouraging, and the Lord might seem to be far away.

But the first reading reminds us of the victory we have in God, as it anticipates the coming of Christ. His mission on earth was the beginning of a new world, where suffering can be transformed into joy, and death into life. Living in God’s favour calls for responding to Jesus’ presence in our midst.

The second reading invites us to a life free of discrimination, where a preference is shown to those who would not otherwise be considered important. They might be discriminated against because they are less intelligent, or they have little money, they dress shabbily, they cannot afford a luxurious life or are not sufficiently cultured.

James reminds us, that as we found favour from the Lord so we must also favour others, regardless of their status. This implies a preference for the poor, showing no partiality, fulfilling the commandment of loving our neighbour as ourselves.

It means not judging others but showing mercy because we also have received mercy from God.

Many of us find reading the scriptures boring and the sacred text inapplicable or irrelevant. But is this really the case? In the letter to the Hebrews we read, “the word of God is alive and active”. When Jesus healed the deaf man, the man regained his power of speech and his ears were opened. There is power in the Word of God, and through the opening of our hearts to listen, we can be healed and renewed in Christ.

Jesus’ healing touch is still available today. You are healed in Jesus name, you just need to believe in Jesus Christ. Of course, we can experience it, if only we let God work in our lives; if only we let Jesus touch us and heal us. However much God favours us, our response is needed. We need to respond through attitudes such as putting our trust in God, and accepting God’s salvation, attitudes that can free us from any form of disease, physical or spiritual impediments, any form of slavery or other inhuman situations.

We have been favoured by God, and this should help us to put our trust in him. We have been favoured, not because of our own merit but out of the love of God. This love should also spur us to act as the agents and channels of God’s favour to others. We need to love one another.

Action: My prayer will be to ask God to heal me of all the problems I encounter.

Prayer: Jesus Christ the Divine healer, I praise you for loving me as I am. I do not deserve to be favoured, but out of your love for me you are willing to touch the innermost parts of my life, to bring healing to my life especially in areas that have made me deaf to your Word. Open my ears that I may listen to Your Word. Open my heart that I may live according to Your Word.  Heal me of all that impedes me from bringing hope and healing to others. We ask this through Christ our Lord, Amen.