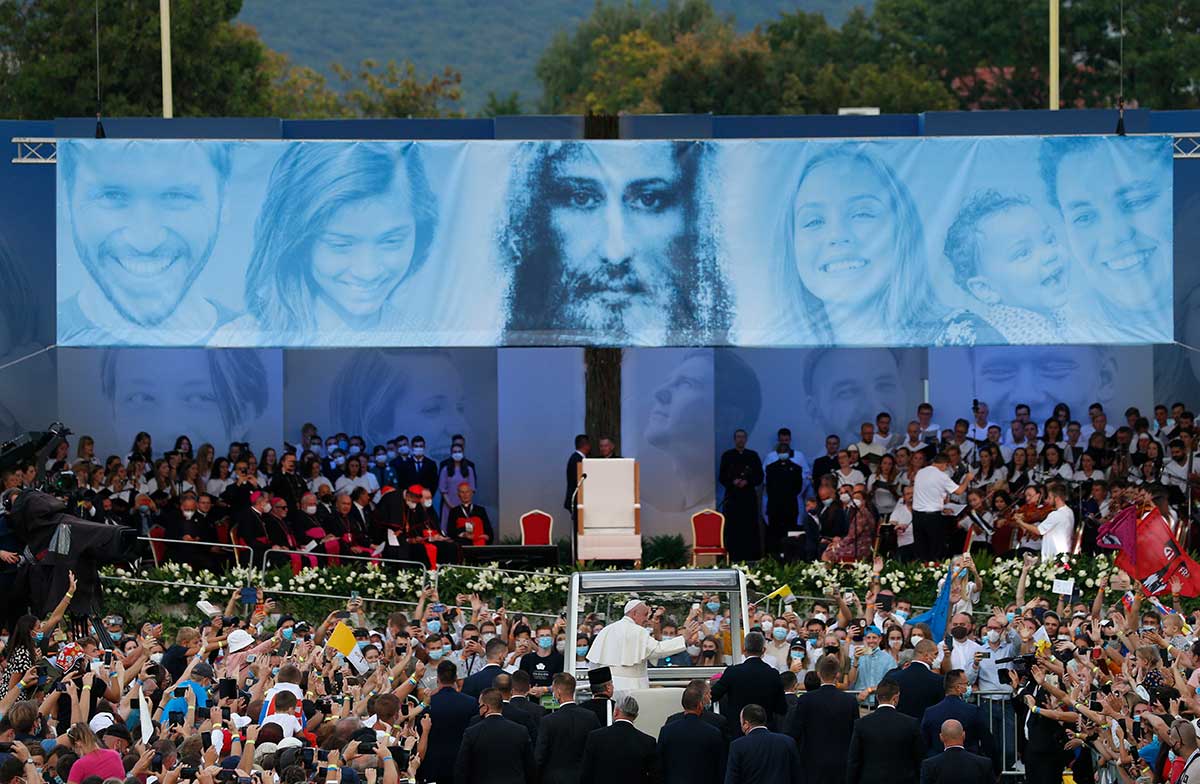 Pope Francis greets the crowd as he arrives for a meeting with young people at Lokomotiva Stadium in Košice, Slovakia, on Sept. 14, 2021. (CNS photo/Paul Haring)

By Junno Arocho Esteves – Pope Francis made sure that while the world often disregards the young and the marginalised, in the Catholic Church, “no one ought ever to feel out of place or set aside.”

He met with members of Slovakia’s Roma community and with more than 20,000 young people on Sept. 14, during his Sept. 12-15 visit to the country.

“The church is indeed a home; it is your home,” the pope told the Roma community living in the Luník IX neighbourhood of Košice.

“Always feel at home in the church, and don’t ever worry about whether you will be at home there. Nobody ought to ever keep you or anyone else away from the church!”

According to the European Commission, the EU’s executive branch, the Roma, also known as Gypsies, make up roughly 9% of the population, or about 500,000 people.

An estimated 4,300 people are believed to be living in Luník IX neighbourhood, one of the highest concentrations of Roma in Slovakia.

According to the Vatican, the Luník IX neighbourhood is plagued with notable infrastructure problems, including limited gas and running water and lack of heating. Several apartment buildings were also razed due to structural deterioration. Despite the circumstances, the Catholic Church has maintained a steady presence under the care of Salesian priests since 2008. The mission aided the material and spiritual needs of the community, including the building a church and a pastoral centre.

Salesian Father Peter Bešenyi welcomed Pope Francis and said his visit to the neighbourhood would encourage the residents, priests as well as lay and religious volunteers “to achieve greater unity despite their differences and walk along the path toward a more peaceful coexistence.”

Ján Hero, 61, along with his Slovak wife, Beáta, spoke to the pope about the challenges faced by the Roma community, especially due to the coronavirus pandemic that affected the community due to inadequate hygiene coupled with crowded living conditions.

“We see your visit as a manifestation of interest and (it) confirms the unconditional love of God for the Roma community in Slovakia and for the Roma people around the world,” Hero said.

“We have the hope that your mission here today, in our midst, in this place, will help ignite a greater faith and a more stable determination to transform our personal and spiritual lives for the better,” he said.

Speaking to Hero and his wife, the pope said the couple’s marriage and the dream of having a family was “more important than the differences in your backgrounds, cultures and customs.”

“More than mere words, your marriage itself shows how the concrete experience of living together can overcome many stereotypes that might otherwise seem insurmountable,” he said.

Noting the prejudice members of the Roma community are often subjected to, the pope said such unjust judgements, along with the marginalisation of vulnerable people, have made humanity “poorer.”

“Judgment and prejudice only increase distances. Hostility and sharp words are not helpful. Marginalising others accomplishes nothing. Segregating ourselves and other people eventually leads to anger. The path to peaceful coexistence is integration,” he said.

After departing the neighbourhood, Pope Francis made his way to Lokomotiva Stadium in Košice where more than 20,000 young people spent the day singing and celebrating the anticipated arrival of the Roman pontiff.

Bernadeta Hrebenarova, 28, told Catholic News Service said she found it “incredible that the pope decided to visit my beloved city of Košice.”

“It’s just unbelievable; I cannot describe the feeling,” Hrebenarova said. “I really hope that the pope will bring a message to us, to the young people, on how we should follow Christ in the current world and how to bring the light to the world.”

Young people in Slovakia, she said, “need to hear that we are needed, that Jesus is with us and that whatever path we are on, we are in his plans, and that he has his own plan for each and every one of us.”

For 20-year-old Filip Bacskai, the pope’s visit to his country “was a really huge surprise for me.”

Nevertheless, Bacskai told CNS he expected to be equally surprised by Pope Francis’ speech to young people. He also said he hoped the pope would address “controversial themes” with his usual candour and “come with something that no one expects.”

“I think we need to hear that we should be brave,” Bacskai said. “That’s what he’s always talking about, the bravery to catch the opportunities that God gives us; the energy that should always be a part of a young person’s life.”

In his address, the pope encouraged young people to rebel against “the culture of the ephemeral” that seeks only momentary pleasures that come and go.

“Dear friends, let us not trivialise love, because love is not simply an emotion or feeling, even though it may start that way. Love is not about having everything now; it is not part of today’s throwaway culture. Love is fidelity, gift and responsibility,” he said.

Love and heroism, he continued, go hand-in-hand as evidenced by the life of Blessed Anna Kolesárová.

Known as the “Slovak St. Maria Goretti,” Blessed Kolesárová was killed in 1944 at the hands of a Soviet soldier after she refused his unwanted sexual advances.

Calling her a “heroine of love,” Pope Francis encouraged young people to “aim high” and not “let your lives just pass by like so many episodes in a soap opera.”

He also urged them to “dream of a beauty that goes beyond appearances” and dared them to shun “the fads of the moment” that prevent them from finding true happiness and true love.

“Dream fearlessly of creating a family, having children and raising them well, spending your life in sharing everything with another person,” he said. “Don’t be ashamed of your faults and flaws, for there is someone out there ready to accept and love them, someone who will love you just as you are.”

The pope also called on young people to not forget their roots and to not yield to the persistent self-absorbed culture that turns people into “spreaders of negativity” and “professional complainers.”

“Pay no attention to them, for pessimism and complaining are not Christian. The Lord detests glumness and victimhood. We were not made to be downcast, but to look up to heaven,” he said.