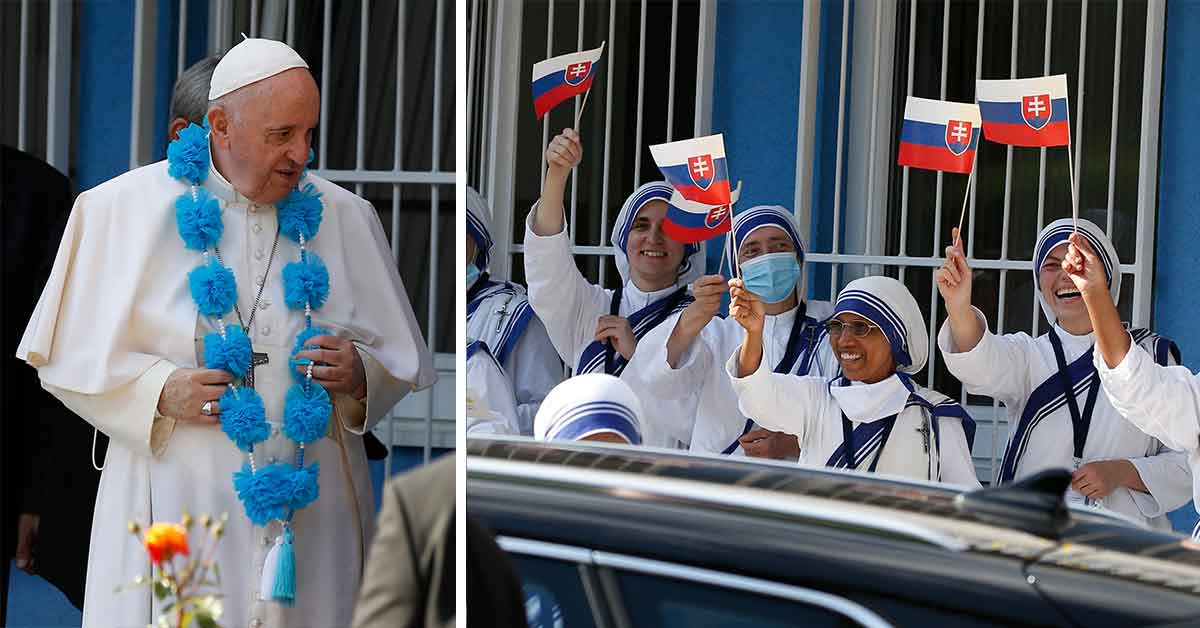 By Junno Arocho Esteves – Slovakia’s tradition of hospitality along with its witness of faith amid persecution must be at the forefront of government policies and the Catholic Church’s engagement with the faithful, Pope Francis said.

Addressing government authorities on the first full day of his visit to Slovakia on September 13, the pope said the traditional custom of welcoming guests is a powerful message of love, especially toward migrants and vulnerable people.

“No one should be stigmatised or suffer discrimination. Our Christian way of looking at others refuses to see them as a burden or a problem, but rather as brothers and sisters to be helped and protected,” he said.

The pope began his day with a welcoming ceremony at the presidential palace followed by a private meeting with Slovak President Zuzana Caputová.

After the meeting, he addressed government authorities, members of the diplomatic corps and civil leaders.

In his speech, the pope said that after numerous challenges throughout its long, rich history, Slovakia “attained integration and distinctiveness through a fundamentally peaceful process” that led to its independence in 1993 after the dissolution of Czechoslovakia.

That peaceful transition to become an independent state serves as “a message of peace in the heart of Europe” and an example of fraternity, which is “necessary for the increasingly pressing process of integration,” especially as the European Union seeks to recover from the coronavirus pandemic, he said.

Nevertheless, “there is always the risk of succumbing to impatience and the lure of profit, leading to a fleeting sense of euphoria that, rather than bringing people together, proves only divisive,” the pope warned.

Reflecting on the Slovak tradition of presenting bread and salt to honoured guests, the pope said the significance of bread, particularly in Scripture, is a powerful message that “reminds us that true wealth does not consist simply in multiplying the things we have, but in sharing them fairly with those around us.”

The pope also commented on the importance of justice, particularly in stamping out corruption. Since 2018, two governments were ousted after massive protests engulfed the country due to reported connections between members of the ruling Direction-Social Democracy party and the Italian organised crime syndicate, ‘ndrangheta.

The pope emphasised the need of building a future “in which laws are applied fairly to all, based on a system of justice that is not up for sale.”

“If justice is not to remain an abstract ideal, but to be as real as bread, a serious battle against corruption must be undertaken and, above all, the rule of law must be promoted and must prevail,” he said.

After his meeting with government authorities, the pope made his way to the Cathedral of St Martin, where he met the country’s bishops, priests, men and women religious, seminarians and catechists.

Hundreds gathered outside the cathedral cheering in Italian, “Viva Papa Francesco” (“Long live Pope Francis”). Entering the 15th-century edifice, the pope smiled as those gathered in the cathedral applauded while a choir sang in Latin, “Tu es Petrus” (“You Are Peter”).

In his address, the pope emphasised the need for a humble church that is “not a fortress, a stronghold, a lofty castle, self-sufficient and looking out upon the world below,” but instead one that immerses itself in the life of the people.

“Living within the world means being willing to share and to understand people’s problems, hopes and expectations. This will help us to escape from our self-absorption, for the centre of the church is not the church,” he said.

The Catholic Church, he continued, is called to respond to the spiritual needs of the people, beginning with freedom.

“The tragic chapters of your country’s history provide a great lesson: Whenever freedom was attacked, violated and suppressed, humanity was disfigured, and the tempests of violence, coercion and the elimination of rights rapidly followed,” the pope said.

However, the pope said freedom also requires “personal responsibility for our choices, discernment and perseverance” and not giving in to the temptation of having “everything readily defined, laws to be obeyed, security and uniformity.”

A church “that has no room for the adventure of freedom, even in the spiritual life, risks becoming rigid and self-enclosed,” he said. “Some people may be used to this. But many others – especially the younger generations – are not attracted by a faith that leaves them no interior freedom, by a church in which all are supposed to think alike and blindly obey.”

Departing from his prepared remarks, the pope recalled a letter he received from a bishop who complained about the nuncio assigned to his country.

“‘We were under Turkish rule for 400 years; we suffered. Then 50 years under communism, and we suffered. But these seven years with this nuncio have been worse than the other two,'” the pope recalled the bishop writing. “I ask you, how many people have said the same about their bishop or priest?”

The pope also urged members of the clergy to learn to communicate effectively with the faithful and to not give “40-50 minute homilies on arguments no one understands.”

Drawing laughter and applause, the pope added that “nuns who are the victims of our homilies” deserve the applause.

Much like Sts. Cyril and Methodius, who “invented new languages for handing on the Gospel,” the pope said the church must learn to create “new ‘alphabets’ to proclaim the faith, especially at a time when many people view Christian tradition as a relic of the past that “no longer speaks to them or affects the way they live their lives,” he said.

“Faced with the loss of the sense of God and of the joy of faith, it is useless to complain, to hide behind a defensive Catholicism, to judge and blame the world. We need the creativity of the Gospel,” the pope said.

Lastly, Pope Francis stressed the need for dialogue, especially with those “struggling with religion, and even with those who are not believers.”

Memories of “past injuries can breed resentment, mistrust and even contempt,” which can lead the church “to barricade ourselves against those who are different.” However, the pope said the wounds of the past can also become “passages, openings that, in imitating the wounds of the Lord, allow God’s mercy to emerge.”

“That grace changes our lives and makes us artisans of peace and reconciliation,” the pope said. “You have a beautiful proverb: ‘If someone throws a stone at you, give him bread in return.’ How truly evangelical this is!”