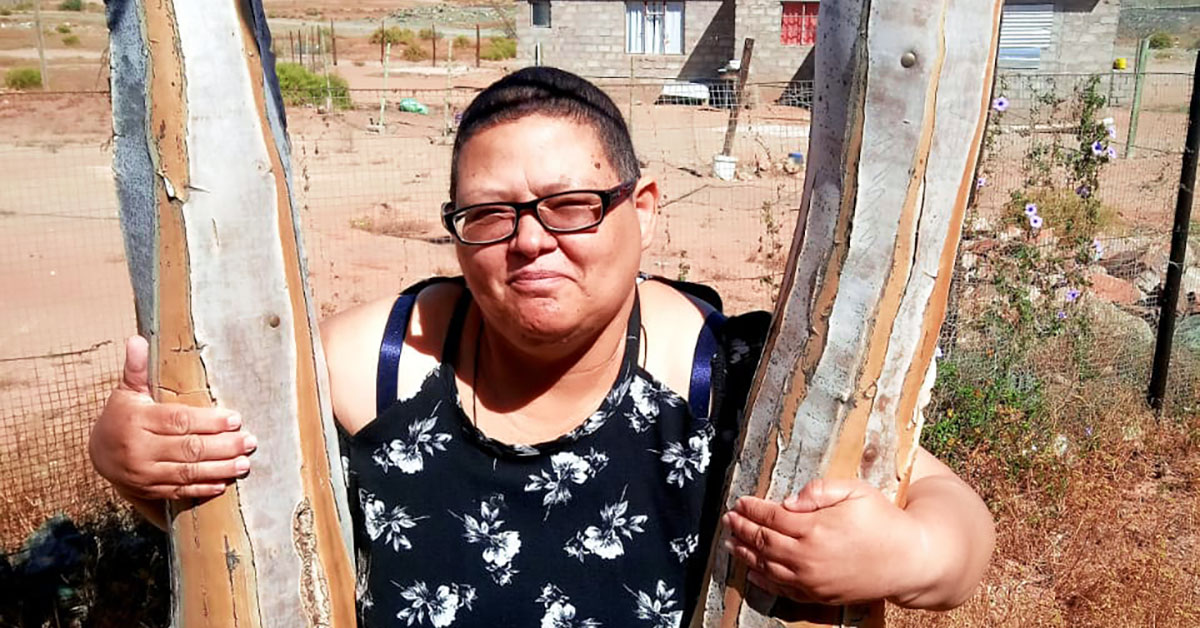 Most communities have them: the unsung heroes who give their all to make life better for others. Rosanne Shields recalls one such hero.

Once a year, the dry veld of Namaqualand is transformed into a carpet of wildflowers, a spectacle of great abundance and beauty. Many people take a drive up the West Coast, thinking they are going to Namaqualand. They’re not.

Namaqualand is hard-earned through a long trek up the N7 into the Northern Cape, past Bitterfontein and Garies. When you reach Kamieskroon the terrain changes, becoming more rugged and undulating. By evening you know you have arrived in the heart of Namaqualand when the mountains turn a shade of pink. Here you are cradled by Springbok, Okiep and Nababeep, in a world of Nama legends, with its own distinct Afrikaans dialect, and a people as unique as the blushing mountains.

In 1992, while working for the national Church organisation Rural Development Support Program (RDSP), my colleague Jane de Sousa and I ventured up there on our first fieldtrip.

A request had come from the French ambassador, via Cardinal Owen McCann of Cape Town, to check on the welfare of French religious Sisters based in the area and further afield towards Keimoes, the seat of the diocese of Keimoes-Upington.

There was also interest from the Community Chest in supporting some kind of outreach work up there.

A group of interested parties had gathered in Cape Town, under the steady gaze of the cardinal, and it was decided that RDSP would undertake the work. We had no idea where to even begin. So we turned to Mary Lack, one of the founders of what became Catholic Welfare & Development. She had a good knowledge of the area, having carried out numerous trips as far north as Namibia when volunteering for the Apostleship of the Sea. Jane and I set off with wild enthusiasm but returned home initially defeated.

The year 1992 was a tricky time in our country’s transition from the horror of apartheid to democracy. We forget how tumultuous that in-between time was and how much jostling for position had to take place politically. We naively launched ourselves into the task of visiting the few civil society organisations we could find in Namaqualand in an effort to introduce ourselves and to find out how we could be of help. We were met with total distrust, and in some cases disbelief that we could possibly think anything helpful could come out of Cape Town for the people of this forgotten territory.

We understood, but spent much time licking our wounds at roadside picnic spots while we warmed up tins of soup. We were there to bring the great liberating message of community development but nobody wanted us!

It was at one such spot, under drooping pepper trees, that the rather obvious hit us and our spirits lifted. We needed to find Church-based people and activities where we could offer our services.

On our next visit we asked the local St Vincent de Paul Society, Legion of Mary, Catholic Women’s League and Chiro youth movement to meet with us in Okiep. The relief of all of us making the sign of the cross as one and saying an opening prayer together was tremendous.

While we blundered through a prepared script in our private-school Afrikaans, out of the corner of my eye I spied a friendly-looking woman of much our own age — early twenties — trying very hard not to giggle. By the end of our piece she stood up and declared that we were welcome, that perhaps God had sent us, that there was much work to be done, and that she would help us do it.

We had found not only our enduring home, but our friend for life: Quinta Titus. That was the very beginning of what would become a successful development organisation in the diocese of Keimoes-Upington called Namakwa Ontwikkeling (NAMKO).

Nearly 30 years later, RDSP and NAMKO still work closely together— but this year we lost our beloved Quinta to Covid-19. (And on May 31 we also lost Mary Lack.)

Quinta was inspired and driven by an inner force to serve God. She was particularly drawn to working with youth and then later in the traumatic field of gender-based violence (GBV).  As the years rolled on, the interconnected alcohol and drug abuse problem in Namaqualand grew, as it did in many parts of our country. With the methamphetamine “tik” being manufactured so easily, it took hold of whole communities and destroyed families, livelihoods and childhoods.

Listening to Quinta describe what alcohol and drug addiction was doing to her community was deeply disturbing. As in many places, the minerals and wealth have been extracted in central Namaqualand, using local labour, but now the future is bleak. Unemployment creates poverty, and poverty has some nasty bedfellows.

But as surely as those wild flowers pop up in miraculous ways every spring, there are always good people who reach out to others, despite their own challenges. Over the years a strong network of community-based organisations has been formed, with Quinta and NAMKO anchoring it, and this network has achieved great things. With a total absence of rehabilitation centres in the area and a lack of government strategy to deal with GBV, these mostly women-run organisations needed to find creative responses.

Quinta set up the Inspirited Women’s group, where those battling with GBV themselves or within their family could gather for mutual support and counselling. This led to a membership-based saving scheme run by NAMKO, giving women some financial independence.

More community support groups were started by local women, stretching from Spoegrivier in the south to Port Nolloth further north. The groups were for those affected by GBV and substance abuse or for abusers themselves, providing them with counselling. The training of those running the groups was done by RDSP and the South African National Council on Alcoholism and Drug Dependence (SANCA).

These groups were the subject of a research project at university level which declared them highly effective in providing a safe haven for those trying to overcome addiction and violence and for their families. Around Quinta’s leadership and compassion we saw the circle widen of people committed to changing the situation.

NAMKO has survived the ups and downs inherent in the NGO world because they have been willing to adapt. They have a plan to launch themselves as a community foundation, which would enable them to support small local organisations in need of grants. We have seen how far these organisations can make a small grant of R10000 stretch, providing educational sessions in school, starting wood-fired micro bakeries, forming street committees to watch out for vulnerable children, and using puppets to interact with younger children on the topics of violence and abuse.

A great start was made on May 29 this year when NAMKO launched the Quinta Titus Gender-Based Violence Response Fund as a way to honour her work of 30 years.

RDSP director Brenda Snyders attended the event and sums up Quinta’s impact perfectly: “Quinta was a support to so many people. Being a single parent to her son Jude, she was the person he relied on.

Her whole world revolved around providing Jude with the best life she could possibly give him. For her elderly mother and siblings, she was the one they could turn to when in need of support.

In NAMKO she was the one driving processes and making sure the funds were raised to implement much-needed programmes. In the Catholic Church in Nababeep she was the right hand of the parish priest and served on many committees. For the women of the Inspirited Women’s groups she was a life-saver, offering counselling and support for women experiencing many forms of abuse. She provided a safe space where they could share their stories and leave with a renewed sense of hope.”

St Catherine of Siena tells us to be who God wants us to be, and we will set the world on fire. Quinta did just that. She lit up the Namaqualand sky with her passion and love. Her infectious laughter will echo forever between Nababeep and Okiep, her stomping ground, and this faithful servant of God will never be forgotten.