Woman religious who crusaded against nuclear weapons dies at 91 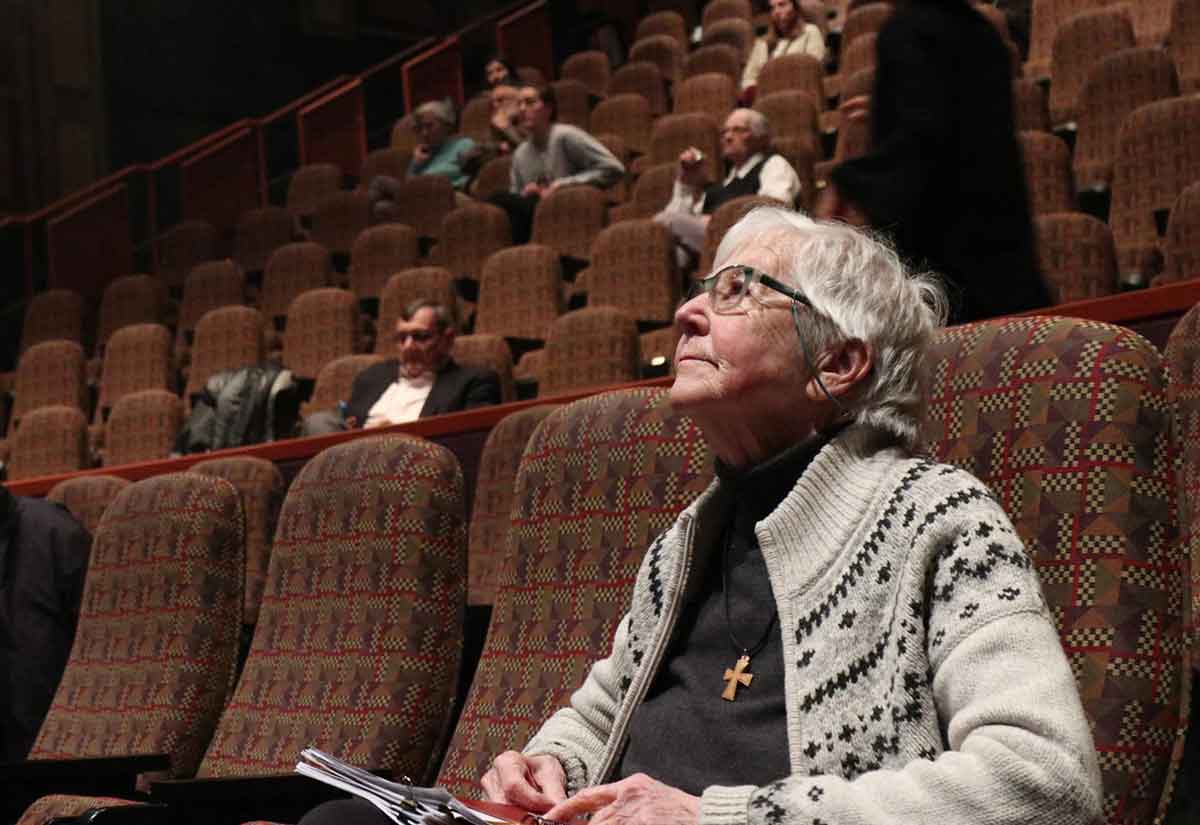 Sister Megan Rice, a member of the Society of the Holy Child Jesus, looks up at the movie screen in the DeBartolo Performing Arts Centre on April 8, 2018, at the University of Notre Dame in South Bend, Indiana, awaiting the screening of a documentary about her anti-nuclear activism. Sister Rice died Oct. 10, 2021, at her religious order’s residence in Rosemont, Pennsylvania at age 91. (CNS photo/Katie Rutter)

Sister Megan Rice, whose yearslong crusade against nuclear weapons included serving two years behind bars for a felony, died October 10 at the Rosemont, Pennsylvania residence of her religious order, the Society of the Holy Child Jesus. She was 91.

Colleen Carroll, director of communications for the order, said the cause of death was congestive heart failure.

“It is incredible to consider how the bravery of this small, smiling, unassuming woman in standing up to the entirety of the U.S. military-industrial complex could bring so much awareness to the devastation our nation’s idolatry of nuclear weapons inflicts on people here in the U.S. and around the world,” Johnny Zokovitch, executive director of Pax Christi USA, said in a statement.

“All of Pax Christi USA grieves at her passing, but we give thanks for her witness, for her life and for the challenge that she issued by standing up nonviolently for a better world for all of us,” he said.

Sister Rice’s bold campaign against nuclear weapons launched her into the spotlight and caused her to become the issue’s ad hoc spokeswoman.

In July 2012, at age 82, she and two other members of Transform Now Plowshares breached security to stage a protest at the self-styled “Fort Knox of uranium,” the Y-12 National Security Complex in Oak Ridge, Tennessee. The facility creates and houses materials for making nuclear weapons.

The three activists cut through fences and reached the warehouse that stores bomb-making uranium. There, they splashed blood on the wall, hung banners and spray-painted messages condemning nuclear weapons.

The action sparked national shock and outrage, led to a congressional investigation of the security at Y-12 and sent Sister Rice and her companions, Michael Walli, then 63, and Greg Boertje-Obed, then 57, to prison.

On Feb. 18, 2014, in U.S. District Court, Sister Rice, of Washington, was sentenced to 35 months in prison on each of two counts – one count of depredation of property and one count of sabotage.

Walli, also of Washington, and Boertje-Obed, of Duluth, Minnesota, were sentenced to 62 months in prison each on the same counts.

The three had been convicted on the charges in May 2013 and held in prison since their convictions. Their sentences were to be served concurrently and the three were credited for the nine months they were held in prison.

All three had faced sentences of about six to 10 years on each count under federal sentencing guidelines. They all had participated in similar protests prior to their 2012 action.

The activism of Sister Rice, whose conviction was overturned by an appeals court in 2015, caught the attention of filmmaker and Emmy-winning producer Helen Young.

Young was already working on a documentary about this country’s nuclear arsenal. In April 2018, she released her film, “The Nuns, The Priests and The Bombs.”

Sister Rice toured the country to protest the United States’ nuclear arsenal as the star of the film. She also spoke to a congressional hearing and at the United Nations in New York City on the issue of nuclear disarmament.

And she continued her activism through vigils, marches, prayers and visits to classrooms.

“It’s illegal to deal in weapons of mass destruction – immoral and illegal,” Sister Rice declared during an April 8, 2018, event at the DeBartolo Performing Arts Center at the University of Notre Dame in South Bend, Indiana, where the documentary was being screened.

Born January 31, 1930, in New York City, Megan Gillespie Rice was the youngest of three girls in an Irish Catholic family.

Her father, Frederick W. Rice, was an obstetrician-gynaecologist who taught at New York University and treated patients at several New York City hospitals.

Her mother, Madeleine Newman Hooke Rice, was a Barnard College graduate who took graduate courses studies at Columbia University while her children were growing up. She earned a doctorate in history and wrote her dissertation on Catholic views about slavery.

Sister Rice’s parents were active in the Catholic Worker Movement and were good friends of movement co-founder Dorothy Day.

Young Megan was educated in Catholic schools and joined the Sisters of the Holy Child Jesus at 18. She was trained as an elementary school teacher and taught in the early grades in Mount Vernon, New York.

During that time, she also was a part-time student at Fordham University and Villanova University. She earned a bachelor’s degree in biology at Villanova in 1957 and later received a master’s degree from Boston College.

In the 1980s, Sister Rice got involved in the anti-war movement, participating in protests against a variety of American military actions, military sites and nuclear weapons installations.

She was arrested more than three dozen times in acts of civil disobedience, including her anti-nuclear weapons activism.