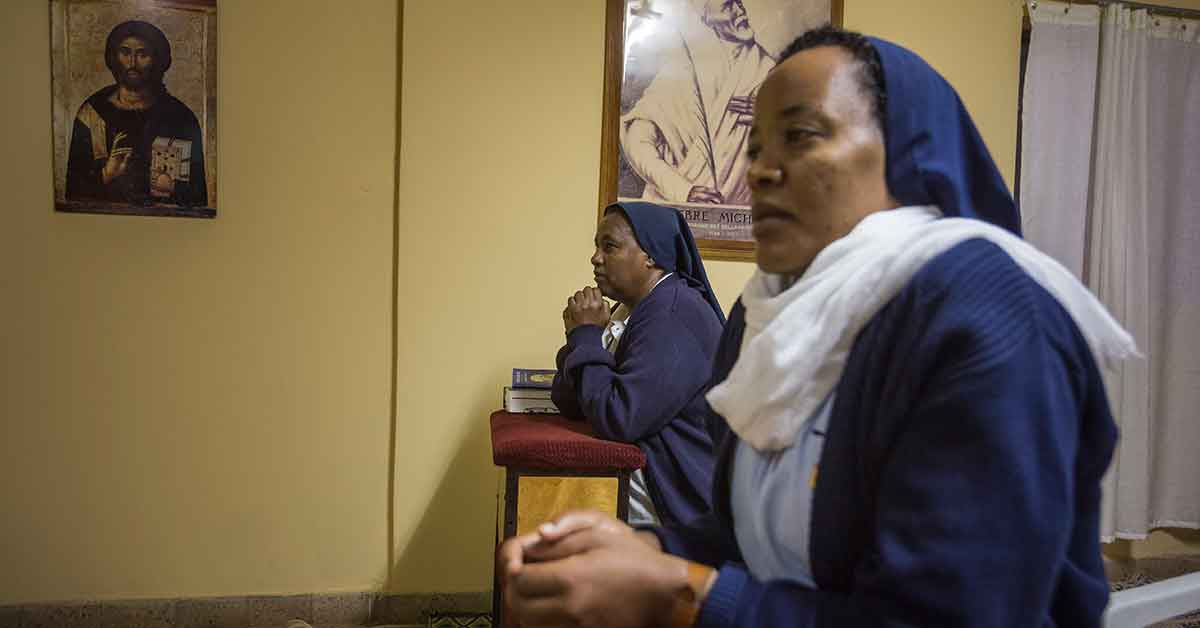 Two sisters of the Daughters of Charity in Bahir Dar, Ethiopia, gather for morning prayer in their convent chapel in this 2015 file photo. Bishop Lesanuchristos Matheos of the Eparchy of Bahir Dar-Dessie described the violence in the region as a “Way of the Cross” for the church and the faithful. (CNS photo/Petterik Wiggers, courtesy CNEWA)

By Laura Ieraci – An Ethiopian Catholic bishop has described the massive destruction, suffering and loss of life that continues to plague the people in his eparchy since violence spilled over from the conflict that erupted in the Tigray region more than a year ago.

Bishop Lesanuchristos Matheos of the Eparchy of Bahir Dar-Dessie described the violence as a “Way of the Cross” for the church and the faithful.

“We are all in great tribulation, tension and sorrow with the numerous people who are in exodus, forced to leave their land and property to save their lives and that of their families,” he said in a recent message.

“Numerous lives are lost, public and private properties are looted,” including hospitals, and infrastructure has been destroyed, he wrote.

The “most painful” aspect of his hospital visits, the bishop said, has been ministering to the young girls and women being treated for injuries they sustained as victims of sexual violence. Armed groups on both sides of the conflict have been accused of using rape as a weapon of war.

The eparchy’s territory is just south of Tigray, a region in northern Ethiopia, and spans the entire country, from west to east.

The conflict spilled into the eparchy when armed forces aligned with the former ruling party, the Tigray People’s Liberation Front, known as TPLF, moved out of Tigray and seized several towns within the eparchy’s boundaries – including Dessie, Kombolcha and Kobo – as they advanced toward the capital Addis Ababa. Forces allied with the Ethiopian government later retook the towns.

However, church infrastructure in those areas has come largely undone as religious communities and lay workers scattered and fled to safety.

As summer started, TPLF forces took control of Kobo, where the Capuchin Fathers run St. Joseph Church, an orphanage, an elementary school and high school. By early July, the Capuchins fled with the 20 orphans in their care as part of a mass exodus from Kobo to Woldiya, about 55km south. At least one of the Capuchins’ buildings was damaged. Health workers, teachers and other lay workers also fled the town.

The Ursuline Sisters in Kobo, who run a clinic and a kindergarten, however, decided to stay behind to serve the people. But with the collapsed communications infrastructure in Kobo, the bishop said he has not received much news about the sisters.

“The little information we are receiving is from some individuals who know our sisters and who have escaped from the town,” he said. “We are worried about them, as they do not have supplies, especially food and other supplies.”

There has been no “humanitarian support entering into the town for more than four months,” the bishop added.

Although the Ethiopian Catholic Church does not have parishes in northern towns, such as Nefas Mewcha, where sexual violence and the destruction of homes, clinics and other social institutions were rampant, its social and development office is working in these areas offering humanitarian assistance. Staff members have described the situation in the towns as “unimaginable,” Bishop Matheos said.

“With faith as Christians, we still believe that God intervene(s) for this painful experience,” he added.

The church response in Dessie includes providing food and non-food essentials to about 1,200 people, with the Catholic parish offering shelter and meals to about 30 children and elderly people in the church compound. The Capuchin friars and Ursuline sisters in Dessie have remained in the town to continue their ministry, even though many people fled to other towns after the TPLF took control of Dessie.

The bishop’s message included several accounts of laypeople, religious and priests, who fled different towns to escape the violence and destruction.

The suffering is ongoing and will have a lasting impact, the bishop said.

“Therefore, we need to scale up support to respond to the humanitarian crisis and massive rehabilitation work in our eparchy in the near future,” he explained. “We need to work hard to rebuild peace among our communities, promote healing, social coexistence and reconciliation.

“We are all praying for peace to prevail, it is only Christ who is the King of Peace who brings lasting peace.”