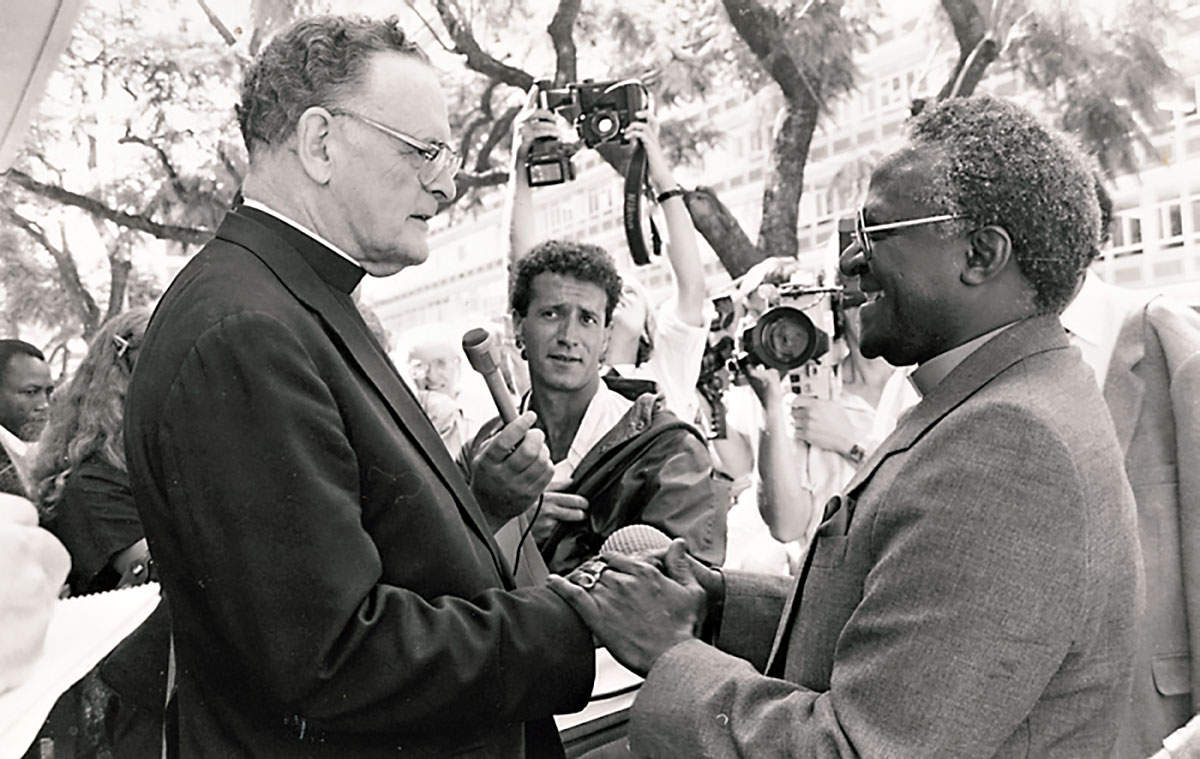 South Africa’s most famous cleric was an Anglican, but Archbishop Desmond Tutu had many ties to the Catholic faith, as Günther Simmermacher points out.

Archbishop Desmond Tutu, who died at the age of 90 in Cape Town on December 26, made his clerical career in the Anglican Church, but at one point, he is said to have contemplated the Catholic priesthood. Instead, he got married in a Catholic Church and became an Anglican priest.

Born on October 7, 1931, in Klerksdorp as one of four children of Zachariah, a teacher, and Aletta, a domestic worker, Desmond Mpilo Tutu’s first exposure to Christianity was in the African Methodist Episcopal Church which his parents attended.

As of 1945, he was schooled in Sophiatown in Johannesburg, where two years later he contracted tuberculosis. During his 18-months of hospitalisation, he came to know Anglican Father (later Archbishop) Trevor Huddleston, who would soon become a prominent anti-apartheid activist. Fr Huddleston would be a great influence on Tutu for many years.

After matriculation, Tutu studied to become a teacher. He was qualified in that profession by the time he fell for the teaching student Nomalizo Leah Shenxane, a Catholic. They had met earlier: Leah had been one of Zacharia Tutu’s brightest pupils and friends with Desmond’s sister Gloria. Leah had obtained her junior certificate at a rural Catholic school near Pietersburg (now Polokwane).

Desmond and Leah made their nuptial vows on July 2, 1955, in the Catholic church of Mary Queen of the Apostles in Munsieville, Johannesburg. Oblate Father Jean Verot officiated. In the marriage register, kept in Latin, Fr Verot noted that this was a “mixed marriage”, listing Leah as a Catholic and Desmond a Protestant.

They would have four children together. The oldest, Trevor, was named after Fr Huddleston. The second was named Thandeka Theresa Ursula; the two middle-names were a nod to Leah’s Catholic background. The family worshipped in an Anglican church, St Paul’s in Kumalo, Soweto, where Desmond — who had left teaching by then — was involved in several lay roles.

He found his vocation there, and studied at St Peter’s Theology College in Johannesburg before he was ordained an Anglican priest in 1960. Tutu’s final college report praised his exceptional skills and intelligence, but also noted that he had “seemed to be suffering from a touch of ‘Roman fever’.” The report recommended that “perhaps his bishop might do well to question him about that before ordination”. The apparent affliction of “Roman fever” insinuated that Tutu, a High Anglican, was exhibiting signs of subscribing to the beliefs and practices of the Catholic Church, as biographer John Allen noted in his 2006 biography of Tutu, Rabble-rouser for Peace. 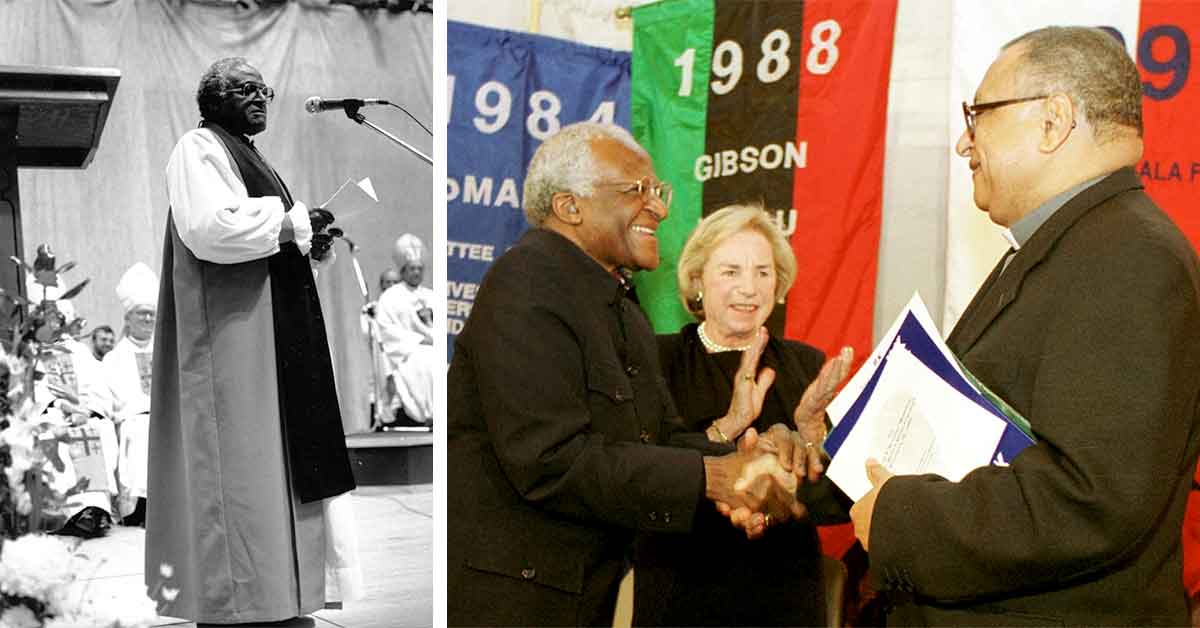 That flirtation with Catholic practices continued even after Tutu had been made a bishop. When he was appointed secretary-general of the South African Council of Churches in 1978, Tutu introduced staff prayer meetings, retreats and the like. His daily prayer routine remained one of disciplined devotion, including the Eucharist in the morning and the Angelus at noon, complete with the Hail Mary.

Tutu had a great devotion to Thérèse of Lisieux, whose spirituality was rooted in prayer. “As I am not part of the Catholic tradition, I think my interest in her indicates that she has an ecumenical appeal,” he once said. “She encourages us to grasp the significance of retracting into oneself for inner peace, to seek solitude, silence and waiting, to be with God. It can’t have been easy to reach such a prominent position in the Church at a time when women were often seen rather than heard,” he is quoted as saying in the 2018 book Beautiful Thoughts for Beautiful Minds by John Scally.

For all his political and social concerns, Tutu always put God first. His social and political engagements were based on what he discerned to be the mandate of the Gospel. In that he followed in the path set by older Christian leaders, including the Catholic Archbishop Denis Hurley of Durban, who had pushed the Catholic Church to be the first ecclesial body to declare the racist apartheid system a “structural sin”, in 1958. Tutu would later say that Hurley, a man of tall built, was the giant “on whose shoulders we stood”. In his foreword to a 2001 collection of tributes to Hurley, A Portrait By His Friends, Tutu recalled: “I often would say to him whenever we met just how glad I was he was around. I could skulk behind someone of his stature — both physical and moral.”

Tutu came to the Pretoria court where Hurley was charged in 1985 for revealing atrocities committed by the apartheid regime in South-West Africa (then under South African occupation, now the independent state of Namibia), the so-called Koevoet Trial. From the dock, Hurley didn’t address the court, but during breaks, he’d talk with supporters, jokingly inviting Tutu and his wife Leah to join him in the dock. They would have been cleared of all charges; those against Hurley were dropped before the trial could even begin. 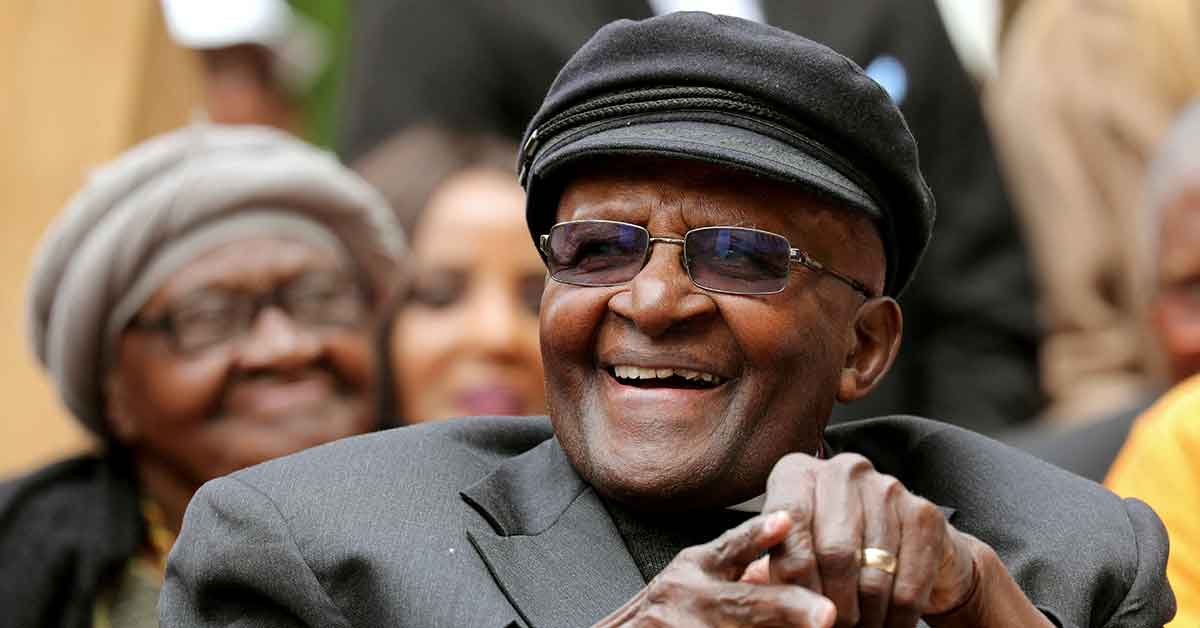 Anglican Archbishop Desmond Tutu laughs as crowds gather to celebrate his birthday by unveiling an arch in his honour outside St. George’s Anglican Cathedral in Cape Town, South Africa, Oct. 7, 2017. The Nobel Peace Prize-winning Anglican cleric, whose good humour, inspiring message and conscientious work for civil and human rights made him a revered leader during the struggle to end apartheid in South Africa. (CNS photo/Mike Hutchings, Reuters)

Put on the spot, newly-elected State President FW de Klerk allowed the march to go ahead. Some 35,000 “Rainbow People”, as Tutu dubbed them that day, took part, with the archbishop and other leaders addressing the crowd from the same city hall balcony where Nelson Mandela would speak for the first time after his release from prison less than five months later. According to De Klerk, that march pushed apartheid over the cliff.

By then, Tutu had already been awarded the Nobel Peace Prize, in 1984. Three years later, he received a prestigious Catholic honour: the Pacem in Terris Award, named after Pope John XXIII’s landmark 1963 encyclical on peace on earth. The day after the world celebrated the birth of the Prince of Peace, Desmond Tutu left this realm.