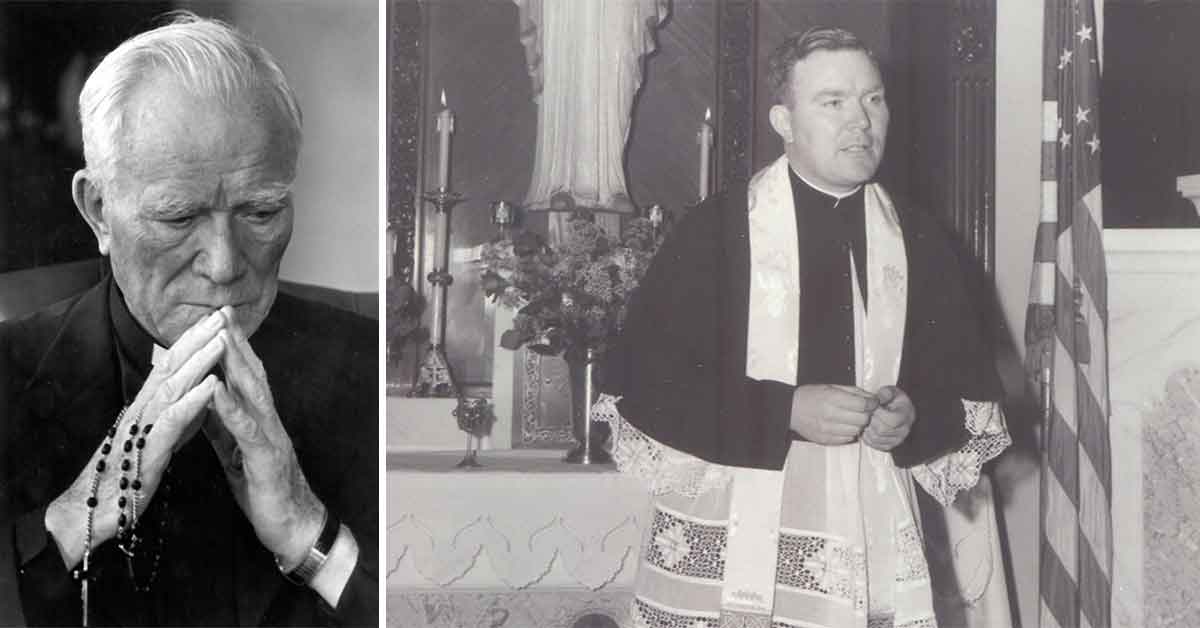 Left) Holy Cross Father Patrick Peyton is pictured in an undated photo. He founded Holy Cross Family Ministries and was declared venerable by Pope Francis in 2017 (CNS photo/Family Theater Productions). (Right) Holy Cross Father Patrick Peyton, a candidate for sainthood, is seen in Long Beach, Calif., in this 1948 file photo. The priest’s gratitude for a miraculous healing led him to create a media ministry that popularized the life-changing idea that “the family that prays together stays together.” (CNS photo/Robyn Kenney, courtesy Holy Cross Family Ministries)

By CNS – The Congregation of Holy Cross has appointed Valentina Culurgioni to be the new postulator for the sainthood cause of Holy Cross Father Patrick Peyton.

Fr Peyton held “Rosary Rallies” around the world—from Peru to the Philippines to Papua New Guinea, and in 1955 in South Africa—earning him the title that he still bears to this day: “The Rosary Priest”.

The congregation announced on Jan. 12 that Culurgioni succeeds Andrea Ambrosi, a civil and canon lawyer in Rome, who retired as postulator.

Irish-born Father Peyton (1909-1992), a media pioneer, was declared “Venerable” by Pope Francis in 2017. Known as the “rosary priest,” he served families worldwide by inspiring them to pray together daily.

He is well known for his famous messages, “The family that prays together stays together” and “A world at prayer is a world at peace.”

The Vatican Congregation for Saints’ Causes granted Culurgioni the mandate to serve as the postulator, who is responsible for managing a cause through the Catholic Church’s canonisation process.

“We are so pleased with the appointment of Valentina Culurgioni as postulator of Father Peyton’s cause,” said Holy Cross Father Wilfred Raymond, president of Holy Cross Family Ministries, based in Easton. “Valentina is a woman of intelligence, talent and devout faith. She brings much to this important role.”

Holy Cross Family Ministries continues the mission of Father Peyton by inspiring, promoting and fostering the prayer life and spiritual well-being of families throughout the world.

According to the announcement about Culurgioni, she has worked in various capacities on sainthood causes, including the cause for the late Archbishop Theotonius Ganguly of Dhaka, Bangladesh, also a religious of the Congregation of Holy Cross, who has the title “Servant of God.”

Culurgioni also has been involved in other works for the Catholic Church.

“Her admiration for Father Peyton’s life and works will bring great energy and enthusiasm to the cause process,” said Holy Cross Father David Marcham, vice postulator and director of the Father Peyton Guild. “We look forward to working with Valentina in the days ahead.”

“We are so grateful to Dr. Ambrosi for his many years of service and his good work to bring us this far in the process,” he added. “We wish him well in his well-deserved retirement.”

Ambrosi began his service as postulator during the early years of Father Peyton’s cause. He recommended Culurgioni to be his successor in that role.

In June 1997, the Congregation of Holy Cross requested that a cause for canonisation for Father Peyton be initiated. In June 2001, the Vatican granted the “nihil obstat” – a declaration of no objection – and Father Peyton was given the title “Servant of God.” Since then, the life and works of Father Peyton have undergone thorough and minute examination.

By declaring him “Venerable,” the pope confirmed he is a person of heroic virtues who is “worthy of emulation by the faithful.”

The next step is beatification, after which he would be called “Blessed.” The third step is canonisation.

In general, for beatification, one miracle needs to be accepted by the church as having occurred through the intercession of the prospective saint and a second such verified miracle is needed for canonisation.

Father Peyton was born Jan. 9, 1909, in Carracastle, County Mayo, Ireland. His parents, John and Mary Peyton, gathered their family to pray the rosary every evening.

After emigrating from Ireland to the United States, Patrick became gravely ill as a seminarian and doctors offered no hope of recovery. He followed his parents’ example and turned to the rosary.

He was “stricken with tuberculosis,” said Father Raymond. “He prayed his rosary to the Blessed Mother and made a miraculous recovery. From that moment, he promised to spend the rest of his life on a special mission for Mary, bringing millions of families around the world together to pray the rosary just as his family did every evening.”

Ordained June 15, 1941, Father Peyton began Family Rosary, in Albany, New York, in 1942, with the goal of building family unity through daily prayer of the rosary. He went on to lead 28 million people in prayer at 40 rosary rallies including 2 million each at events in São Paulo and in Manila, Philippines.

He spent the 51 years of his priesthood serving the spiritual needs of families. In 1947, he founded Family Theater Productions in Hollywood, which produced 900 radio and TV programs that featured hundreds of star actors and other celebrities and had more than 10,000 broadcasts.

Each mission centre provides digital complimentary prayer resources on a variety of platforms for families as well as face-to-face events, including rosary rallies, days of reflection, seminars, and other fun, faith-filled events.