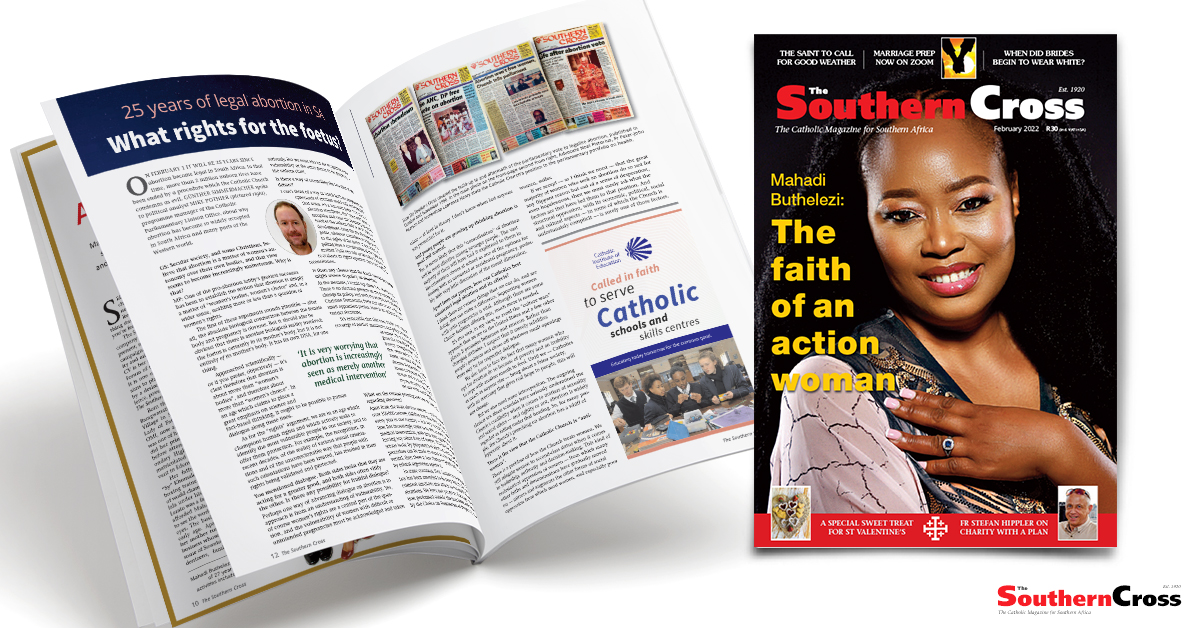 This month marks 25 years since abortion became legal in South Africa. Our readers, of course, need not be reminded of the Catholic Church’s teachings on abortion: it is clear and it is immutable.

This 25th anniversary reminds me of the flurry of activity that took place in the months and weeks leading up to the parliamentary vote on the abortion law in November 1996. There was a lot of lobbying going on behind the scenes.

Fr Peter-John Pearson and Mike Pothier of the Catholic Parliamentary Liaison Office (CPLO) worked tirelessly to make the Church’s voice heard, in public by the parliamentary portfolio on health as well as privately by individual parliamentarians, some of whom were torn between the moral imperative and party discipline (and thus their career).

I covered all that for The Southern Cross, and had privileged access to some of the behind-the-scenes activities. I recall being touched by the visible sadness felt by Adelaide Tambo, the widow of the late ANC president Oliver Tambo, at the proposed legalisation of abortion by her own party. There was opposition to the law within the ANC caucus. That is why there was a lot of debate about a free vote, by which those who objected to abortion could vote against the Bill, or at least abstain. It was speculated that if there was a free vote, the Bill might be defeated.

That question was hotly debated within the ANC when a press conference was called by Dr Abe Nkomo, chair of the parliamentary portfolio committee on health. All the press was there, TV cameras were rolling. Before it began, an ANC MP who privately opposed abortion took me aside and asked me for a favour: Could I ask Dr Nkomo a particular question on a contested procedural point governing the free vote debate?

I decided that this issue was big enough to allow me to stretch my professional ethics a bit, and I agreed.

So I took my seat at the packed press conference, and eventually raised my hand to as “my” question, which the MPO had helpfully written down for me. The trouble was that I had no idea what the question meant (and I graduated in political science Primi Ordinis!). While my colleagues from the press nodded appreciatively at my doubtless very informed question, below the table around which we sat my knees were shaking uncontrollably. What if Dr Nkomo asked me to explain my question, which I would not have been able to do? To my great relief, Dr Nkomo responded respectfully and in some detail. At least, I think he did; I didn’t hear a word of what he said.

Alas, no free vote was allowed by the ANC, and the Termination of Pregnancy Act was passed, to take effect on February 1, 1997. Now, 25 years later, we are speaking to Mike Pothier of the CPLO about that law and what we can do to alleviate its cruel effects. He notes with alarm that “abortion has increasingly come to be seen as merely another medical intervention, with little more significance than having any other form of surgery”. Are our moral arguments being heard? How can we reshape the narrative, and dialogue, to persuade people that abortion is not a neutral choice, but the taking of a human life?

Our cover this month features Mahadi Buthelezi, a businesswoman, a devoted family woman, and all-round Catholic activist. As it is with Fr Stefan Hippler, who writes for us on page 22, I never cease to wonder where such people find the time to do their great work. Did the good Lord bless them with 48 hours in a day when he gave us mere mortals only 24?

This month we also showcase two important Catholic initiatives. The Association of Catholic Tertiary Students is a good way for students to be involved in campus life while also nourishing their faith. All Catholic students at tertiary institutions should be encouraged to join ACTS. Read about it on page 8.

Catholic Engaged Encounter has helped many couples prepare for marriage, but it doesn’t have a presence everywhere in South Africa. Technology is providing relief, as we read on page 14.

And our Saint of the Month is very special to me personally. I’ll tell you why on page 20.

Thank you for reading The Southern Cross, and please spread the word about your monthly Catholic magazine.