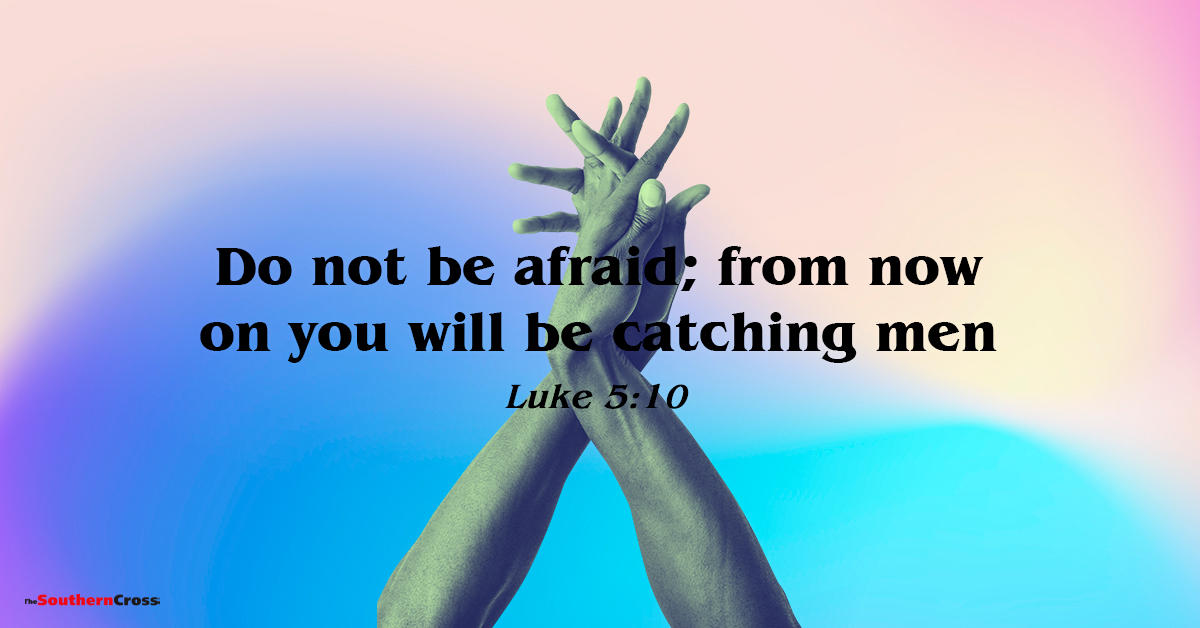 Theme: Never doubt yourself: Trust in the Lord Jesus Christ!Duc in Altum!

Point of Reflection: How often do we doubt ourselves? The recounting of the Word of God today reminds us not to doubt ourselves but to trust in the Lord. The example of Isaiah, Paul, and Simon Peter in today’s Scriptural readings reveal how liberation from the sense of self-doubt and unworthiness is the first step towards becoming a prophet or an apostle, and for becoming a good Christian.

You and I as Christians, despite our sense of unworthiness, with the Scriptural readings of today, we can confidently state with the Psalmist, “the Lord will fulfil his purpose for me”.

For this, we can say the words of Jesus in the Gospel of today, “go deeper” Duc in Altum is Latin for “put out into the deep”, the words that Jesus said to Peter when he first encountered him, prompting him to go into deep water and lower his nets for a catch. Our liturgy today must remind us that we need to trust in the Lord and we must go deeper in our Faith.

Sermon (Reflection): Following a reflection on the prophetic vocation from last Sunday, today’s Scriptural readings examine the prophetic call from the perspective of self-doubt to trust in the Lord by going deeper in faith.  The first reading contains an account of the prophetic call of Isaiah presented in some detail (Cf Isaiah 6: 1-8). The event took place in the year of King Uzziah’s death (probably 742 BC) in the form of a vision the prophet had in the Jerusalem Temple. There was an angelic proclamation which caused the entire Temple to tremble and fill with smoke which was another sign of God’s presence and an immense grandeur (Cf. Exodus 19:9.18). Not surprisingly, this vision overwhelmed Isaiah to the point that he doubted himself and had fear.

Besides calamities and fear, Prophet Isaiah’s destiny was to become God’s messenger. Therefore, one of the seraphs cleansed Isaiah, touching him with a lump of burning coal taken from the heavenly altar. This act purified Isaiah’s human and unholy lips so that they could transmit the words of the Holy One. Cleansed, Isaiah felt ready to respond to God’s call and enthusiastically declared, “here I am; send me!”.  Today, as Christians, we are also called amidst our calamities and uncertainties to purify our hearts and to be ready to say, here I am Lord send me.

The first reading teaches us that God reassures and cleanses the called one of self-doubt and the sense of unworthiness. We just need to totally trust in the Lord

In the second reading of today (Cf. 1 Corinthians 15:1–11), St Paul had to overcome a profound personal obstacle that continually called his apostleship into question on his past. As he bluntly acknowledges, he was a violent and zealous persecutor of the Church, which meant that he persecuted Jesus himself (Cf. Acts 9:5). This was his “thorn in the flesh,” that haunted him and led him into profound self-doubt.

In today’s passage, St Paul reveals how he dealt with this situation. First, he recalls his experience of the risen Jesus appearing to him much later than all others, which makes him “untimely born.” Still, he was confident that this was the moment when he received his call to apostleship from the Risen Lord himself. Second, Paul states that he worked harder than all other apostles in the mission field, cooperating fully with God’s grace. Paul fought his self-doubt and guilt, by relying on the personal experience of Jesus and his utter and unwavering dedication to his mission.

As Christians too, we have our own doubts and these doubts hinder us to receive the Lord, it is our calling today as St Paul to firmly trust in the Lord regardless of our bad or terrible past of which we have experienced. No matter how bad the past may be, the grace of God is there for us to be purified and be true agents of evangelisation.

In today’s Gospel passage, at the start of his public mission, Jesus calls his first disciples. Luke narrates this event in much greater detail than Mark and Matthew, focusing his account on Peter, whose call resembles Isaiah’s experience. Approaching Lake Gennesaret and surrounded by large crowds, Jesus saw two fishing boats and the fishermen busy washing their nets after a night’s work.

Jesus chose the boat belonging to Simon as his teaching stage. When finished, Jesus asked Simon to put out and lower his freshly cleaned nets. Simon, an experienced fisherman, knew that this was not the right time to fish. Still, he had enough confidence and respect for Jesus to do as requested. Seeing the unexpected and very abundant catch of fish Peter fell to his knees, acknowledging his sinfulness, and asking Jesus to depart from him.

Calling himself “a sinner” Peter did not mean that he was a wicked and immoral person. He was an ordinary fisherman making a living working in an unpredictable and sometimes dangerous trade. This meant that he could not follow strictly the Jewish law with its numerous and detailed demands, particularly in the area of ritual purity.

He was constantly dealing with strangers and other unclean people. He certainly did not keep the law to the degree that, for example, the Pharisees did, which made him a sinner in their eyes. Recognising that Jesus was a holy man from God and knowing his own situation fully well, Peter saw himself unworthy to be around Jesus. He was completely out of place, much like Isaiah in his vision.

Jesus reassured Peter, first telling him not to be afraid, and then giving him a new mission – “fishing for people.” This simple fisherman who was unable to keep even his own religious laws was entrusted with bringing people to faith in Jesus, and thus securing their salvation! Regardless of whether he understood the implications of his call at that moment, Peter confidently responded to Jesus.

He overcame his self-doubt by an act of trust in Jesus, just as he first did when asked to put out his nets. Today, as Christians, we need to overcome our self-doubt and trust in Jesus Christ.

When Jesus first entered Peter’s life, He prompted Peter to “Put out into deep water and lower your nets for a catch.” Peter reluctantly agreed and as a result his fishing nets tore because of the amount of fish he caught. Peter was completely unprepared for the invasion of Jesus’ grace in his life and the power that it held. Peter “left everything and followed Him” right then and there, astonished by the fact that Jesus had asserted His will into Peter’s life. God is inviting us today to put our faith into the deep (Duc in Altum).

The word “Duc in altum!” reminds me always of Pope St. John Paul II who spoke on this subject of “putting out into the deep” several times. He insisted that God is calling each of us to a deeper life – one full of meaning, purpose and joy. At the 2005 World Day of Prayer for Vocations he said, “. . . one needs to open one’s heart to the abundance of grace and to allow the word of the Redeemer to act with all its power: ‘Duc in altum!’ Whoever opens his heart to Christ will not only understand the mystery of his own existence, but also that of his own vocation; he will bear the abundant fruit of grace.” God is asking us spread the Gospel and He knows that in so doing our lives will become more joyful and meaningful.

There is perhaps no better example of how to abandon one’s will to God than our first pope, St. Peter. A timid fisherman-turned-apostle, Peter was not much of a leader. Peter failed the test of trust when attempting to walk on water. He denied Jesus’ efforts to wash his feet. He vehemently opposed the idea of Jesus dying on the cross (for which Jesus chastised him, calling him “Satan“). Then he fell asleep while Jesus was praying at Gethsemane and he famously denied Jesus three times. He was most certainly “thinking not as God does, but as human beings do.”

But after witnessing the resurrected Christ and allowing Him to infiltrate Peter’s life to the very core, Peter changed dramatically. He went from being cowardly and afraid to being bold and courageous. As our aim is to be good Christians, we can learn from St Peter to move from being cowardly followers of Christ and be bold and courageous followers of Christ.

Action: From today onwards, will never doubt myself but trust in the Lord.

Prayer: Almighty God we thank you for the gift of your word to us this day not to have self-doubt but to trust in You. Grant that we may learn to ride over the obstacles of our self-doubt and guilt that diminish our confidence. We pray also for those who have lost trust in themselves and in you that they may regain their trust in You. Lord implore in us the spirit of courageousness and trust in you all time, we ask this through Christ our Lord. Amen.