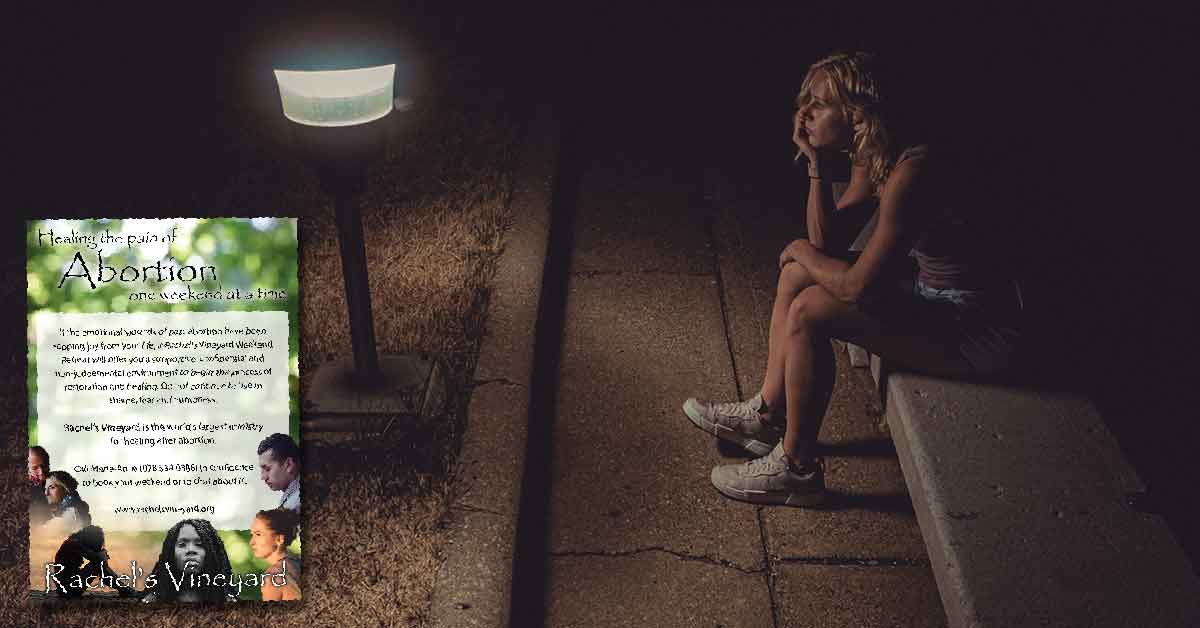 Many women who have an abortion suffer long-lasting psychological trauma and deep wounds as a result. The Rachel’s Vineyard ministry offers healing, and it’s being offered in Gauteng and Cape Town in March and April. We talked to coordinator Marie-Anne te Brake.

Rachel’s Vineyard was developed and founded by US psychologist Dr Teresa Burke as a way of addressing the deep wounds often suffered by women who have had an abortion. The name draws from the book of Jeremiah in which Rachel “mourns her children”, but the Lord offers his consolation.

The approach of the Rachel’s Vineyard weekend retreat and support group model utilises some of the “Steps of Healing”, but does so in a process where the stages of healing are incorporated into a spiritual journey using scripture exercises, meditation, therapeutic techniques, rituals for grieving, and the sacraments to help the individual bring the deep pain and grief of their abortion to the Cross of Christ.

“The Rachel’s Vineyard retreat process has proven to be an invaluable resource for many ministries responding to those traumatised by abortion,” said Marie-Anne te Brake, coordinator for Rachel’s Vineyard in Johannesburg.

“Rachel’s Vineyard is a safe place to renew, rebuild and redeem hearts broken by abortion,” Marie-Anne told The Southern Cross. “Weekend retreats offer a supportive, confidential and non-judgmental environment where women and men can express, release and reconcile painful post-abortive emotions to begin the process of restoration, renewal and healing.”

She said that the Rachel’s Vineyard retreats are “open to anybody who is struggling with the effects of abortion”, regardless of religion. “There are different expressions of the model that Dr Burke developed, but South Africa at the moment has the Catholic model. However, if someone who isn’t Catholic would like to attend, they would most certainly be welcomed with open arms,” Marie-Anne said, adding that there always are some “non-Catholic brothers and sisters at our retreats”.

Brothers? Yes! The retreats are also open to men who have been affected by or were party to an abortion, and are suffering as a result. Some men might have led or even pushed a woman into having an abortion, and “suffer with the guilt, shame and pain of coercing their partner or wife to abort their child”. But, Marie-Anne noted, there are also many men who “feel powerless to stop the decision of the mother of his child from aborting. Fathers have no rights when their partner makes a decision to abort. Rachel’s Vineyard helps him to grieve his loss and to deal with the powerful feelings of anger and depression he might be struggling with.”

In short, Rachel’s Vineyard retreats are open to anyone who struggles with the aftermath of an abortion. This may also include parents of people who were involved in an abortion, who may be heartbroken over a lost grandchild or troubled by their role in it.

“During the Rachel’s Vineyard weekend, we encounter healing through seeking reconnection, integration, and wholeness. Such healing can only happen when the isolation and secrecy are dismantled, and one’s story is revealed to others who do not seek to judge and condemn. Only then is it finally possible, with the support of a small community of others who compassionately affirm the loss and respect the grief, to grieve one’s losses to their fullness,” the Rachel’s Vineyard website counsels (rachelsvineyard.org/faq/index.aspx).

The retreats are absolutely confidential, Marie-Anne emphasised. “Confidentiality is guarded and serious. Signing up for the retreat ensures confidentiality, and a name will never be shared with any other individual or group under any circumstance. Even enquiring about the retreat now, a person is welcome to specify how he or she would like to receive any information. Often people from Johannesburg will attend the Cape Town retreat or vice versa to ensure anonymity. And that’s okay,” she said. 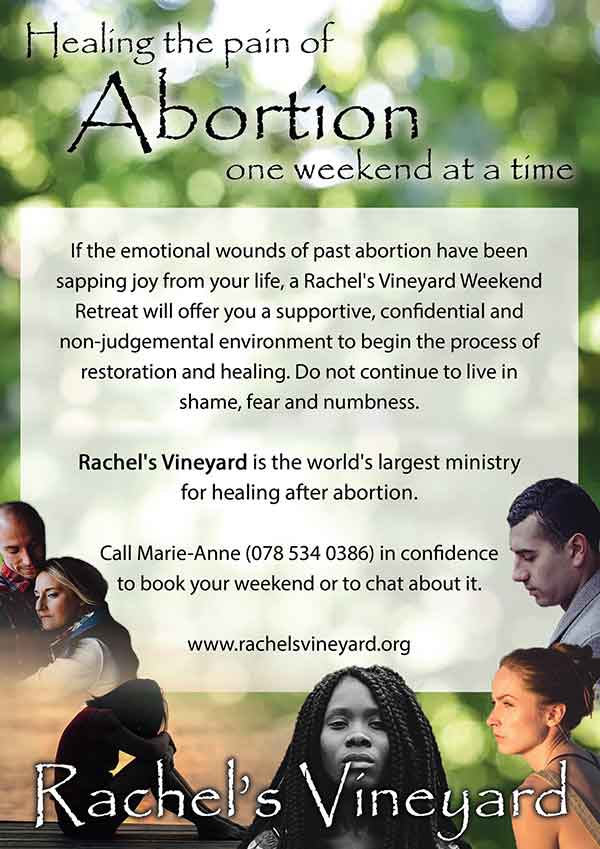 Each weekend is led by a group of people who have been trained in the Rachel’s Vineyard process. “These teams consist of a professional counsellor, women and men who have also experienced abortion, loving and non-judgmental lay volunteers, and a representative of God, such as a minister or priest,” Marie-Anne explained. Bishop Emeritus Hugh Slattery will minister at the Johannesburg retreat in March.

“The team members volunteer their time freely, because they understand the importance of healing and recovery surrounding the pain of abortion. They are competent and caring individuals who will respect where the person is in the grief process and help him or her to move into a deeper level of healing,” Marie-Anne said.

“The weekend comprises readings, reflection and exercises where each is a free invitation to explore feelings and emotions. The person is invited to share with the group, but can also process the experience privately within the silence of their own heart. There is no effort to proselytise or convert, but simply an invitation to dialogue with their Creator through a very personal and intimate process,” she said.

The retreats are predicated on confidentiality and privacy, but often retreatants find that they make wonderful friends on the weekend. Rachel’s Vineyard offers a reunion for those who wish to participate. “Some women and men might even feel called to get involved in other ways by helping on a future retreat team or other involvement with Rachel’s Vineyard,” Marie-Anne said.

Ideally, Rachel’s Vineyard plans four weekends a year in South Africa; two in Johannesburg and the other two in Cape Town. Covid interrupted that cycle over the past two years, but 2022 sees the resumption of the retreats. The first will be held in Benoni, near Johannesburg, from March 19-21. The second will be held in Cape Town from April 1-3.

The price of the retreats covers the costs of accommodation, meals, and materials supplied to participants. “We would not want somebody who is really struggling to not attend because they can’t afford it, and so we have some financial assistance available,” said Marie-Anne. To that end, Rachel’s Vineyard invites donations from anyone who would be willing to support this ministry.