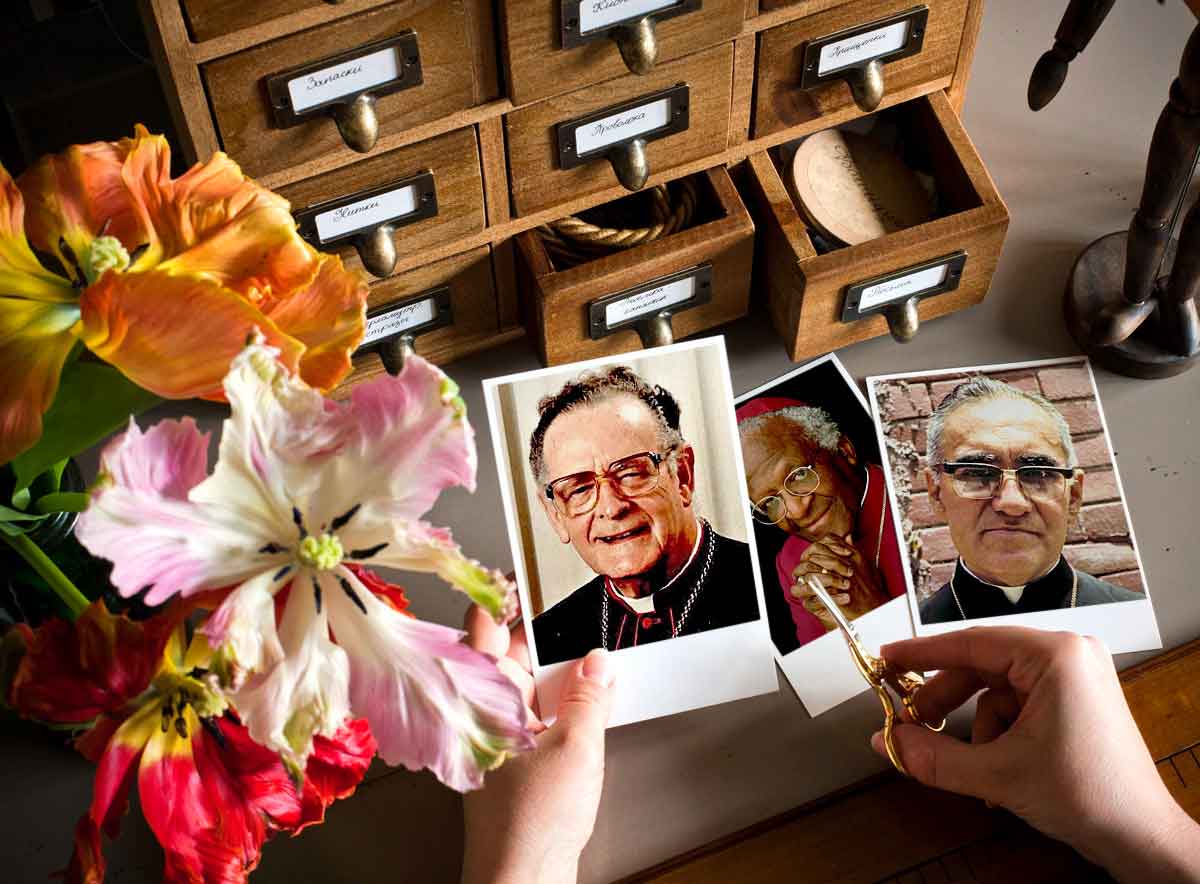 Without a vision,  the people will perish. These resounding words from Proverbs 29:18 have been going round my head as I reflect on three Arches this month: not a reference to Durban’s magnificent (if empty) football stadium but rather to three towering figures in the life of the Church: two Catholic (but one not), two South African (but one not), one canonised (but two not).

Readers will have noticed that the “Saint of the Month” is St Oscar Romero (see pages 21-24). For years before he was canonised in 2018, he was already unofficially regarded by many as a patron saint for Latin America and for all those who fight for justice. Pope Francis  — the first Latin American pope and the first Jesuit pope — was overjoyed to honour a fellow Latin American, and one who was greatly influenced by the Jesuits across Latin America, fighting for the poor in the face of oppressive dictatorships.

It was just such a struggle — overlaid with the added sin of racism — to which my two other Arches dedicated their lives. Much has been written about Anglican Archbishop Desmond Tutu, whose death at Christmas spawned a host of reflections and tributes. Even closer to my daily work is, of course, Archbishop Denis Hurley, who is also commemorated in this issue since it is 75 years ago on March 19 that he was ordained a bishop.

What did these three men have in common? And what can we learn from them as we consider leadership in the Church today?

The secular world will always look first at their external achievements: the courage to protest in the face of harassment and legal threats; the effectiveness with which they used their positions to be “a voice for the voiceless”; the care taken to collect information about the violations caused by government so that people could not claim “we did not know”. While these all seem so obvious now that “the battle is over”, we should not forget how hard it was to do this at the time, in the face of opposition both from outside and inside their religious families. When seeing the honour in which they are all held today, it’s to forget that this was not always the case.

Archbishop Romero was ostracised by his fellow bishops in El Salvador and given short shrift in Rome by Pope John Paul II (who later voiced his admiration for him). Even after his martyrdom while he was saying Mass — dismissed by some as political and not religious — Romero was treated as an embarrassment by some of the leading Catholic lights of Latin America. The exploitative ruling families and oppressive economic systems against which he campaigned were still in place, and they continued to exercise a powerful and malign influence over the Church.

Archbishop Hurley also did not always have the full support of his fellow bishops, nor of his priests. When standing on his own as he protested outside Durban City Hall, he was criticised, heckled and even spat at by passersby who felt they were doing their Christian duty to correct this wayward bishop. And some of the same newspapers which recently hailed Archbishop Tutu as a hero, ran headlines only one generation ago denouncing Hurley as the anti-Christ and “Public Enemy Number One”!

We might pause to consider whose prophetic voices in the Church we currently marginalise, aware that one day we may also come to see some of them as having been misunderstood. But for now we can congratulate ourselves that we do finally appreciate these three archbishops for the prophetic stance they took and the personal suffering they faced. The Arches have become Golden, honoured with garlands from both state and Church. There are streets and buildings bearing their names.

Moreover, the airport in San Salvador is named after their heroic archbishop, and there is a move for a similar renaming in Cape Town after Tutu — surely the modern secular equivalent of a canonisation.

And Romero himself has had the official Vatican endorsement of being raised to the altars. Many feel that the cause for the canonisation of Archbishop Hurley also deserves to be taken seriously — “St Denis of Durban” has a very nice ring to it. I have no doubt that Hurley is showering us with miracles from heaven. It is unlikely, however, that a future St Denis could be twinned with St Desmond: the Anglican Church does not have a procedure for official canonisation and the Vatican considers canonising only its own.

Two other aspects of these lives strike me as similar. One is that all three archbishops were known to be men of deep prayer: they certainly performed courageous acts in public, but only — in imitation of Christ himself — after turning inwards to spend time with God. Prayer was necessary, but not sufficient. In this they were, to use a Belgian phrase, méditant-militant (prayerful activists).

The Jesuit spiritual exercises describe a contemplation of God’s love that is so overwhelming that it cannot help itself from pouring over into love for others. Love of God cannot be contained in the chapel! One of my favourite Romero quotes captures this: “To pray and then do nothing and wait for God to act, is not a sign of holiness — it is a sign of laziness!”

Another parallel is that all three were so confident in their own religious identity that they had the ability and the humility to work with people from other backgrounds who shared their vision. Operating against an extreme right-wing government, Archbishop Romero — an intrinsically conservative man with ties to Opus Dei — found common cause with some communist activists (which is what upset John Paul II). That does not mean that he agreed with them on everything, and he was strongly opposed to the use of violence, but he operated under the principle that “my enemy’s enemy is my friend”.

When Archbishop Hurley became a bishop in 1947, Catholics barely spoke to other Christians, let alone to non-believers. But it was a recurrent characteristic of his episcopacy that he reached out to fellow Christians and to people of other faiths to find ways of working together. In doing this, he both anticipated and then realised the teachings of Vatican II. Archbishop Tutu was famous for his friendship with the Buddhist leader, the Dalai Lama, and also able to hold together the often disparate wings within the Anglican Church itself.

These archbishops believed in the “big tent” principle: bring together those who share your vision and focus on what you have in common, not on what divides you. Such networks and coalitions served them well and served the mission of the Church.

And what of now? Do we have religious leaders who are visionaries, who are prophetic, who can inspire us? In contrast to 75 years ago, we are now open to the possibility of religious leaders who are not men and who are not ordained. But the role of our bishops and archbishops is still paramount. We certainly need good administration in the Church — and so we need leaders who can either perform those tasks or genuinely delegate them to others who do have those skills. But more than that, we need a vision. We have the foundation of one in the new pastoral plan.

But leadership is now required which is courageous and which can articulate that vision: in words that everyone can understand and in actions. Clear, decisive, prophetic actions which show what vision the Church has for South Africa today! For without such a vision the people, and the Church, might perish.