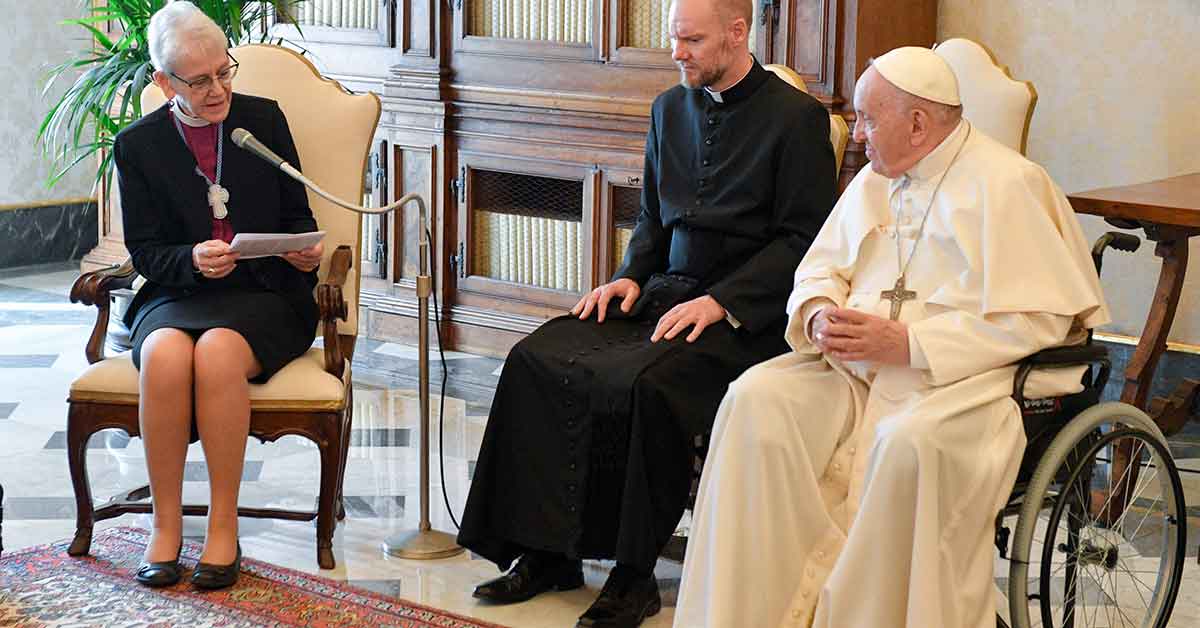 Anglican Archbishop Linda Nicholls, the Anglican primate of Canada and Anglican co-chair of the Anglican-Roman Catholic International Commission, speaks to Pope Francis May 13, 2022, during a meeting in the library of the Apostolic Palace at the Vatican. (CNS photo/Vatican Media)

By Cindy Wooden – Divided Christians must recognise how their sins have fractured Christ’s church, be honest about the struggles their communities are facing and be humble enough to recognise that others have gifts they need, Pope Francis said.

Welcoming members of the Anglican-Roman Catholic International Commission to the Vatican May 13, the pope also insisted that while the formal theological dialogues continue, divided Christians also must be willing to get their hands dirty “in shared service to our wounded brothers and sisters discarded on the waysides of our world.”

The “journey” toward Christian unity is not simply metaphorical, he said.

“As part of this concrete journey, I wish to recommend to your prayers an important step. (Anglican) Archbishop Justin Welby and the moderator of the (Presbyterian) Church of Scotland, two dear brothers, will be my travelling companions when, in a few weeks’ time, we will at last be able to travel to South Sudan.”

Pope Francis, Archbishop Welby of Canterbury and the Rev. Dr. Iain M Greenshields, the new moderator of the Presbyterian church, have announced they will visit South Sudan together July 5-7.

In a land where different denominations evangelised different communities and many of those communities are experiencing political tensions with each other, the pope said: “Ours will be an ecumenical pilgrimage of peace. Let us pray that it may inspire Christians in South Sudan and everywhere to be promotors of reconciliation, patient weavers of concord, capable of saying no to the perverse and useless spiral of violence and of arms.”

Diverging from his prepared text, Pope Francis told the group, “my brother Justin is sending his wife first to do the works of preparation and charity. And this is the good work that he does, as a couple, with his wife. Thank you so much.”

In ecumenical relations, like in civil relations, he said, “we must not fall into the bondage of conflict.”

“We must distinguish between crisis and conflict,” he said. “We, in our dialogue, will have to enter crisis, and that is good,” because a crisis can force people to recognize danger and find creative ways to overcome it.

Catholics and Anglicans, the pope said, are called to walk together, “moving forward, leaving behind the things that divide, past and present, and keeping our gaze fixed on Jesus and the goal that he desires and points out to us: the goal of visible unity between us.”

“Every search for deeper communion must be an exchange of gifts, where each makes his or her own the seeds that God has sown in the other,” the pope insisted. “The gifts of the Holy Spirit are never given for the exclusive use of those who receive them. They are blessings meant for all God’s people: The graces we receive are intended for others, and the graces others receive are necessary for us.”

In the realm of ecumenism, though, the “exchange of gifts” can be reduced to a formal or ceremonial gesture, he said.

“Humility and truth,” the pope said, are necessary to make sure that does not happen.

The place to begin, he said, must be “by admitting and sharing the struggles we experience. This is the first step: not to be concerned with appearing attractive and secure to our brothers and sisters, presenting ourselves the way we would like to be, but with showing them with an open heart how we are in reality.”

“The sins that have led to our historical divisions can only be surmounted in humility and truth, beginning with experiencing sorrow for our reciprocal wounds and the need to give and receive mutual forgiveness,” the pope said. “This demands courage, but it is the spirit of gift, since each true gift entails sacrifice, entails transparency and courage, and openness to forgiveness.”