Pope: Christian Politics Must be Marked by Love and Respect 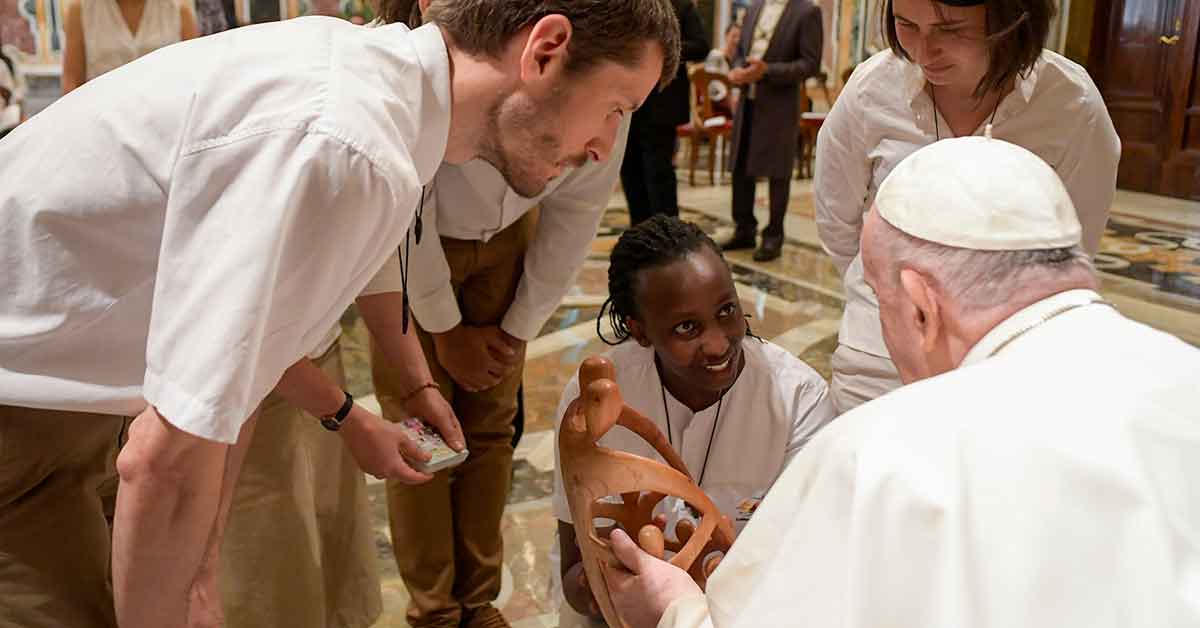 Pope Francis accepts a gift from members of the Chemin Neuf lay movement at the end of an audience May 16, 2022, in the Clementine Hall of the Apostolic Palace at the Vatican. (CNS photo/Vatican Media)

By Cindy Wooden – For politics to be “the highest form of charity,” as Catholic social teaching promotes, it must be exercised with full respect and even love for those who disagree, Pope Francis said.

“We are called to live the political encounter as a fraternal encounter, especially with those who least agree with us; and this means seeing in the one with whom we dialogue a true brother or sister, a beloved child of God,” the pope told an international group of young adults May 16.

The young people, ages 18-35, are part of the lay Chemin Neuf community’s “Politics Fraternity,” which brings together prayer, direct service to the poor and a commitment to the common good and to political activity “according to the heart of God,” the group’s website said.

“Encounter, reflection, action: This is a program for politics in the Christian sense,” the pope told them.

For a Christian, a political encounter and debate must go beyond “respectful dialogue,” he said. “Since the Gospel asks us to love our enemies, I cannot settle for a superficial and formal dialogue, like those often-hostile negotiations between political parties.”

Instead, the pope said, with mutual respect and a solid commitment to finding common ground, political adversaries must listen to each other and seek the good of all rather than the promotion of their pet project or position.

Virtuous politics also involves “common reflection in search of this general good, and not simply by the confrontation of conflicting and often opposing interests,” the pope said. “In short, ‘the whole is superior to the part,’ and our compass for elaborating this common project is the Gospel, which brings to the world a profoundly positive vision of the human person loved by God.”

Pope Francis praised the Chemin Neuf project and its participants for recognising that prayer, dialogue and reflection are not enough.

A politics grounded in reality and aiming to make concrete contributions to people’s lives must include the experience of serving the poor, he said, like the group does with its work with migrants, its care of creation and the small community of young adults who have chosen to live in one of the poorer neighbourhoods of Paris.

At the end of the audience, Chemin Neuf members gathered around Pope Francis, who was seated in a wheelchair because of ongoing knee pain, and prayed for him while laying hands on him.

“In prayer let us all ask God to bless us,” he said. “Lord Jesus, bless all of us who work close to you. Bless our ideas. Bless our hearts. Bless our hands.”