After months of promotion, especially by Durban’s Fr ODonnell OMI who tirelessly toured the country to create enthusiasm for the new Southern Cross,  the newspaper hit the churches on Sunday, October 17, 1920 (a day after the cover date), with a circulation of 3,500 and cover price of 3d. 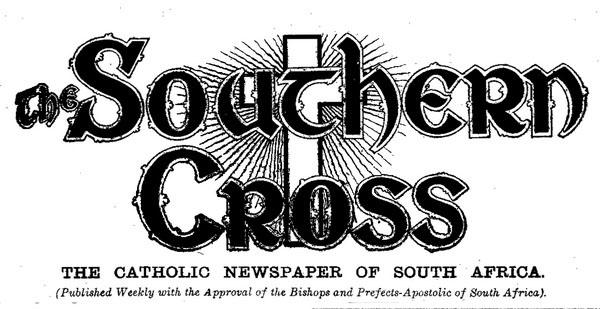 The excitement was great. Outside Durban’s Emmanuel cathedral, a report noted, the young men who had volunteered for the work of distributing the copies of the new Catholic weekly had a difficult task, so eager was the rush to secure the long-wished for issue. The cathedral’s allocation of 800 copies was quickly sold out.

South Africa in 1920 was still relatively hostile territory for Catholics. So in an editorial, Fr Kelly exhorted Catholics not to be afraid or ashamed of being seen reading their newspaper in public. “South African Protestants will respect you South African Catholics all the more for being proud of your faith and showing your pride in it,” he wrote.

Within a few weeks, circulation had risen to 6,000, with the enthusiastic help of the Society of St Vincent de Paul and the Children of Mary. Still, the newspaper lost money, necessitating a price increase in January 1921. The first annual general meeting, held on January 22, 1921, found the company in a precarious state of financial affairs, even as hearty congratulations had been received from all over the union. 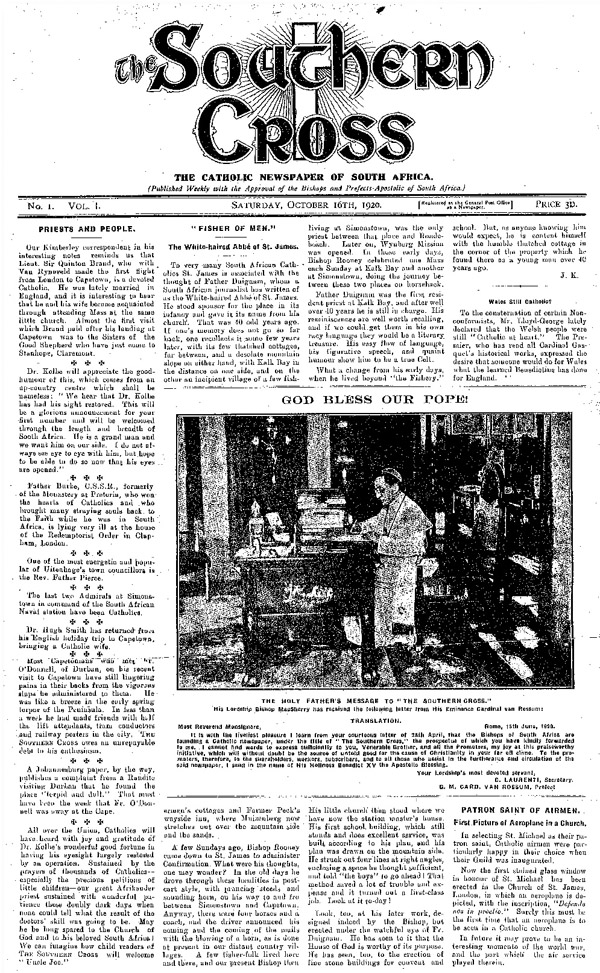 The very first issue of The Southern Cross, featuring a photo of Pope Benedict XV at his desk and a papal message.

The same year, the newspaper moved from Rondebosch to Progress Lane, off Strand Street in central Cape Town. Its new postal address, PO Box 2372, has remained unchanged since. In 1927 operations moved to the Catholic Institute at 11 Hope Street, where the newspaper stayed until 1959 (the building has long been demolished, making way for a complex of flats, opposite St Mary’s cathedral). It has since resided in Plein Street, Roeland Street and in the Cape Town chancery, and since 1993 in Tuin Plein, near the cathedral.

The paper’s first year was marked by editorial acrimony, especially between Mr Donovan and Fr Kelly. Forced to choose between the journalist and the priest, the board decided that Mr Donovan’s role was essential, and Fr Kelly was asked to resign. Mr Donovan, however, also had disputes with acting editor Fr John Morris. The priest offered to resign; in the event, Mr Donovan resigned in January 1922.

The newspaper faced a bizarre problem in 1923: it was advised by an advocate that selling The Southern Cross at Mass on Sunday was illegal under the Sabbath Observance Act. Having secured an indication that the company would not face any legal action, it continued to break the Sunday law. That way, readers continued to enjoy the content which the chairman of the board at the 1925 AGM praised fulsomely: “I do not think any Catholic journal in the world has such a galaxy of famous writers and contributors writing for it practically every week.” 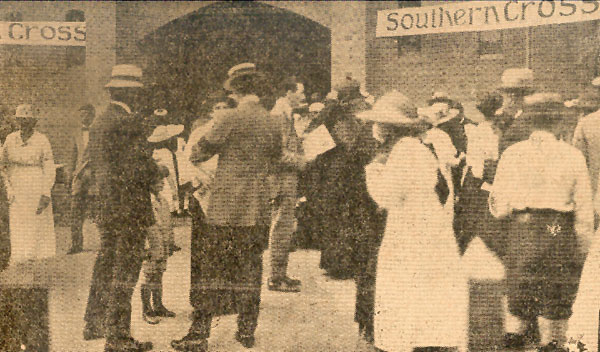 Catholics buy the first edition of The Southern Cross on October 17, 1920

Among that galaxy was Mgr Frederick Kolbe, the intellectual giant of the local Church who had been present at the bishops’ meeting that decided to launch a Catholic weekly.. Mgr Kolbe wrote many articles of consummate erudition, but he evidently had much greater fun running the “Children’s Corner”, a section dominated by affectionate chumminess and in-jokes in which all correspondents were given nicknames. Among these were the children of a lighthouse keeper in Natal. Mgr Kolbe, the local Church’s giant of the first half of the 20th century, called one of them Robin, who as Archbishop Denis Hurley would become the local Church’s giant of the second half of the 20th century.

Other popular columns would be launched over the years. Mary Singleton’s Home Circle was wildly popular in the 1930s and 40s, while from the 1950s on, the various columns by Mgr Desmond Hatton became a fixture. In the 1970s and ’80s, Luky Whittle and The Scrivener enjoyed a long run. Fr Nicholas King SJ began his series of reflections on the weekly Sunday Mass readings in 1992, and as of 2016 is still writing it. Perhaps the most popular column in the post-war era was written from 1983 to 2007 by the cultured Owen Williams, doyen of South African art critics and committed francophile.

In September 1925, The Southern Cross celebrated the installation of the first South African-born bishop, David O’Leary OMI, as vicar apostolic of the Transvaal vicariate by dedicating an entire edition to that event.

You can find Part 1 in this series: Southern Cross history  Part 1: Founding a Catholic newspaper