The seeds for a new Catholic newspaper were planted over breakfast after a Mass for the Association of Old Hibernians in St Michael’s church in Rondebosch, Cape Town, on March 17, 1917.

An eminent priest of the vicariate of Natal, Fr Leo Sormany OMI, communicated to his host, Fr James Kelly, the need for a popular Catholic weekly newspaper. Fr Kelly had no background in journalism, but was greatly excited by the idea. The two priests and a few other clerics proceeded to animate the idea among the laity and bishops.

South Africas widely dispersed bishops, not yet organised into a conference, had the rare opportunity to meet in 1919, on the occasion of the 25th anniversary celebrations of the priestly ordination of Natal’s Bishop Henri Delalle OMI in Durban.

A meeting of the bishops at Cathedral House in Durban, chaired by Bishop Hugh MacSherry of the Eastern Cape vicariate and with Fr James Kelly and Mgr Frederick Kolbe in attendance, resolved that the national Catholic weekly should be founded by the bishops, and be published by a limited company. 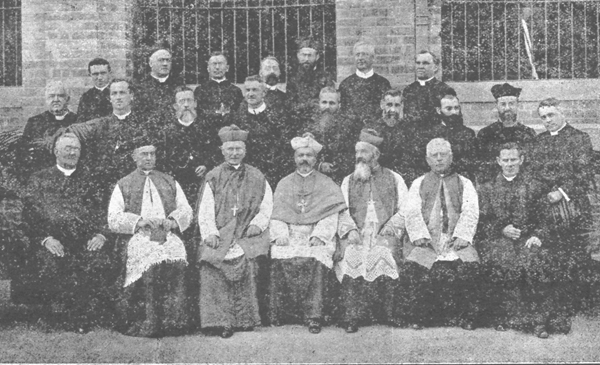 These are the participants at the 1919 meeting of bishops and others in Durban that committed the local Church to launch a national Catholic weekly. In the front are (from left): Mgr Frederick Kolbe, Mgr Kelly of East London, Bishop MacSherry, Bishop Delalle, Bishop Cenez of Basutoland, Mgr Lanslots OSB of Northern Transvaal, Fr James Kelly (who would become the first editor). In the back row are Oblate Fathers O’Donnell OMI (second from left) and Sormany (fourth from left). Fr O’Donnell promoted The Southern Cross while Fr Sormany first raised the idea of a Catholic weekly.

The meeting suggested that the new venture should be edited by a layman, but Bishop MacSherry interjected that he had had experience of lay editors who fiercely attacked their priests and bishops even on political grounds, the minutes record. Bishop MacSherry’s proposal that a professional journalist be appointed to assist the priest editor was accepted.

That editor would be Fr Kelly and so it happened that the newspaper would be based in Cape Town, initially at Fr Kelly’s Rondebosch presbytery. He was to be assisted by Mr A Donovan, the editor of the Cape newspaper who had been present at the Old Hibernian breakfast.

Fr Kelly also arrived at the name for the new paper. He liked the cleverly punned name of an Anglican publication he had received once in 1892: The Southern Cross. Until it was ascertained that the Anglican Southern Cross was indeed defunct, the newspaper was going to bear the unhappily strident moniker The Crusader.

With a name, structure and business plan in place, the Catholic Newspaper & Publishing Company Ltd was floated with a capital of 1,500, divided into shares of 1 each which were sold to laity, parishes and religious congregations throughout the Union. Of these shares, 500 were allotted to the bishops as founders, 750 were offered to the public, and 250 were held in reserve with first option reserved for the bishops.