Advertising has always been a thorny terrain in terms of what is acceptable in a Catholic newspaper. Alcohol ads were common in the 1920s and ’30s before they declined. In November 1989, the board was faced with a query from the bishops’ conference as to whether liquor ads would be accepted. The minutes reflect, with some humour, that the newspaper would take some advertisements without making a big splash of this innovation.

Greater consternation greeted an advertisement for hand-guns in 1963. In the 1970s, ads for government bonds caused protests from Catholic anti-apartheid groups, as did in 1989 an election ad for a National Party candidate.

In the 1970s and 80s repeated debate concerned moving The Southern Cross offices to Johannesburg. The bishops voted down such a proposal in 1970, by 26 votes to one, with five abstentions. Ten years later, the National Pastoral Council made the same call, also asking that the content of the newspaper, edited since 1974 by Mgr Donald de Beer, reflect the aspirations of the majority. 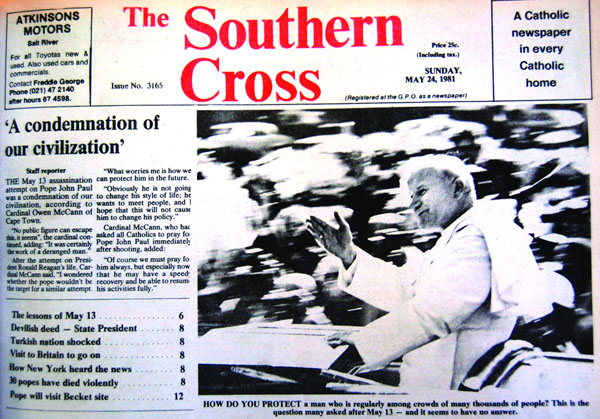 Politics was a running theme in the 1980s. While some readers demanded to know from the editor (who was the brother of Progressive Federal Party MP Zach de Beer) why his newspaper lacked loyalty to the nation (read apartheid), others saw The Southern Cross as a representative of middle-class liberalism or even conservatism.

In 1980, Boksburg parish cancelled its weekly order of 130 copies because The Southern Cross had failed to report on the detention and reportedly rough interrogation of three priests  Frs Michael Mkhize, Remigius Makobane and Patrick Mvemve (later the bishop of Klerksdorp). In an editorial, Mgr de Beer wrote that the report was suppressed at the request of Archbishop Joseph Fitzgerald of Johannesburg on the grounds that publicity could create further problems for the priests, who had been warned by the security police not to mention their detention to anybody (an instruction they had rightly ignored). Embarrassingly for The Southern Cross, the secular press did cover the story. Whether or not public perceptions of The Southern Cross were fair, it would take a long time before the newspaper regained the trust of Justice and Peace activists. 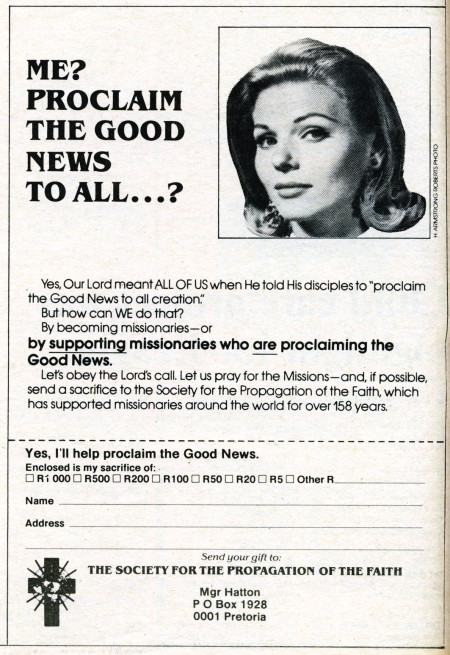 An ad in 1980 for the Pontifucal Mission Society anticipates the New Evangelisation movement by decades.