The board of directors had seen a gradual passing of the torch. On June 15, 1979, chairman Jean Pothier died suddenly. He had served on the board for nearly 33 years, and 24 of these as director. He was followed by William Houghton, who steered The Southern Cross through the turbulent ’80s before his death in 1990, also while still in office.

John Robertson, son of the former chairman JB, then became chairman for the next 17 years. The same year, Mr Pothier’s son Bernard joined the board. The second incarnation of a Robertson/Pothier tandem helped shape The Southern Cross significantly. Both retired soon after one another in 2006/07, when Chris Moerdyk, a columnist for the newspaper for several years before he joined the board, was elected chairman. When Mr Moerdyk resigned as chairman in 2014, he was succeeded by the first female chair of the company, Rosanne Shields — daughter of Bernard Pothier and grand-daughter of Jean.

Much changed over the years in the way the board of the Catholic Newspaper & Publishing Company runs The Southern Cross affairs. In 1952, the company still debated the acquisition of a hatstand (the board, the reader will be relieved to learn, authorised the procurement). In the late 1980s, it faced much bigger decisions. In 1987, the board of directors approved the purchase of a “telecommunication computer” for processing international wire stories via the Post Offices Saponet service — a forerunner of e-mail. A year later, managing editor Gene Donnelly mooted the notion of switching to a new-fangled “Desk Top Publishing system”.

Over the next few years, money was invested into the study of programmes and purchase of “hard drive equipment”, suitable disks and a “mouse”. In 1991 Mr Donnelly moved to implement the Apple Macintosh system. The same year, veteran journalist Sydney Duval in a report for the bishops’ conference backed that idea, and proceeded to initiate financing from the German funding agency Missio Aachen. 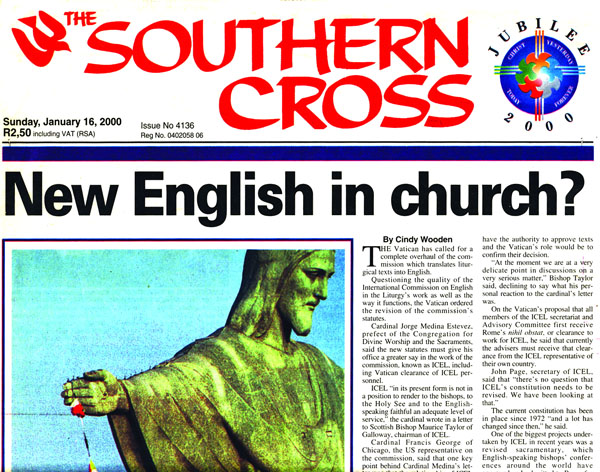 The cover of the issue of January 16, 2000 outlines the Vatican’s plans to adapt the wording of the English missal.

Fr Connor’s appointment was preceded by renewed discussion about the employment of a lay editor (there were voices proposing Mr Bruyns, who had previously worked for the social communications department of bishops’ conference), and the debate resumed when Fr Connor announced his resignation in late 1994, effective as of March 31, 1995.

Some directors felt that it was important that a priest be editor, with journalistic background secondary. Others, led by Mr Robertson and Mr Pothier, felt the editor could be a journalist layperson with “a church feel”. In the end, the appointment of Michael Shackleton in 1995 satisfied both points of view: he had been a priest, but had also performed ad hoc work for The Southern Cross.

In 1998 Günther Simmermacher, who had joined the staff three years earlier, replaced the long-serving Gene Donnelly as managing editor (Mr Donnelly continued to work for The Southern Cross on a part-time basis until 2010). In February 2001, Mr Simmermacher was appointed editor, the first professional journalist in that position. Editorials written by Mr Simmermacher have frequently made headlines in the world press, secular and Catholic, including such publications as Time and Washington Post as well as The Tablet and America.

The Southern Cross’ masthead since 2001

In 2000, Mr Simmermacher had organised the first Southern Cross pilgrimage to the Holy Land, with Jesuit Father Nicholas King SJ, the long-time columnist, as spiritual director. By the end of the decade, The Southern Cross had headlined seven pilgrimage to destinations such as the Holy Land, Jordan, Egypt, Greece, Turkey, France, Italy and Germany. In 2013 The Southern Cross began organising regular pilgrimages, often led by bishops such as Archbishop William Slattery of Pretoria and Archbishop Stephen Brislin of Cape Town.

In 2003 The Southern Cross published Any Given Sunday, an anthology of columns written by Owen Williams, a noted film reviewer and cultural writer who had become a weekly and hugely popular columnist in 1983. The publication of a book on the Mel Gibson film The Passion of the Christ was followed by the 2012 release of Günther Simmermachers well-received book The Holy Land Trek and the following year Moerdyk Files, an anthology of Southern Cross columns written by Chris Moerdyk.

The Southern Cross was relatively slow to establish a presence on the Internet — the first webpage was launched only in 2003 — but since then the newspaper managed to catch up with new technologies, including a digital edition and weekly newsletter.

In the first decade of the new millennium, most newspapers worldwide recorded drastic decreases in circulation. The Southern Cross held its circulation steady, a feat regarded as so remarkable that the newspaper was named one of South Africa’s top performing newspapers in 2009 and 2010 by Marketing Mix magazine. 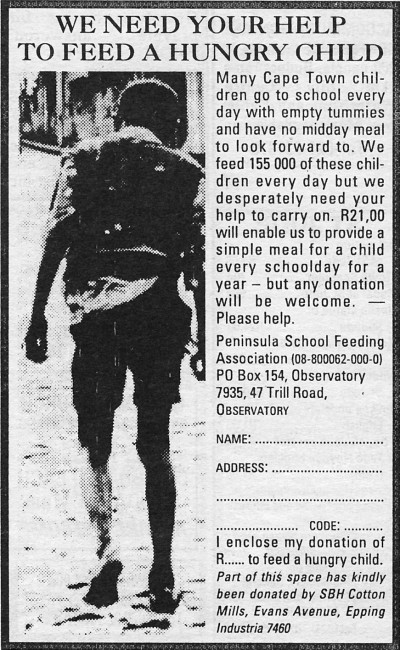 One of the longest-running ads in The Southern Cross, for the Peninsula Schools Feeding Programme, from an issue in the 1990s.