Violence is the answer to our Silence

Let us not take the easy option in the discourse on the wave of xenophobic attacks. 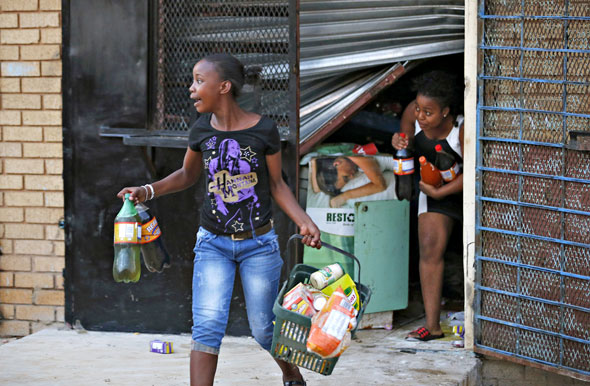 Looters run with items from a shop in Soweto during xenophobic violence. (Photo: Siphiwe Sibeko, Reuters/CNS)

Yes, King Goodwill Zwelithini poured petrol on a volatile situation with his speech about foreign nationals.

Yes, the colonial and apartheid systems vandalised our minds and damaged our national psyche.

Yes, the conditions in which our poor live under are appalling, and our middle and upper classes are hypocritical for not being outraged by these conditions.

Yes, our government is corruptible, incompetent and is fast dragging us into becoming a police state where brute force of the security forces will be the only right.

How are we to heal the vandalised psyche of our people? What authority do we have to shout “peace, peace” when clearly there’s no peace around?

Have we earned the trust of the poor by sharing their suffering and plight, as the watchful Church is called to be a sentinel by Christ? Do they see us as part of the problem or solution? Do we stand with the poor in the trenches, or do we prefer a gospel of false accommodation to the sin of corporate greed and the neoliberal market system that is vanquishing the hopes of the majority for the creation of the elite, silently oppressive few?

The sacrifice of Christ with his blood was the price for our reconciliation with God. The gospel calls us to stand with the poor against injustice. What price have we paid for the authentic reconciliation of our country?

Or do we expect the poor, who paid the price of oppression under apartheid, to again pay the price for its reconciliation while we cry “peace, peace”, when there’s no peace in their oppressed lives?

What are we bringing to the table of sacrifice as the price of healing the psyche of our nation?

Or do we say that it isn’t our business, that the government must deal with them—after all, the poor are the ones who keep voting the failing ruling party.

Or we are content with looking on from our air-conditioned offices and gated communities, with disgust, dusting off our emigration plans with plane tickets and dual passport, ready to bail?

Understanding the causes—if we do indeed—of the barbaric acts of xenophobia does not mean one excuses the behaviour. It means one is starting with the man in the mirror—the mote in one’s eye before seeing the plank in another (Mt 7:5)—to try and understand what brought us here, and where one is complicit in the whole business.

For instance, the call by Pope Francis for the economic systems of the world to share resources with the poor has necessitated a backlash for the Church to begin with its own wealth.

The Church in Southern Africa does well in looking after the needs of immigrants and the displaced—rightly so, since our religion is more or less one of wanderers. It knows how it feels to be foreigner since the days of Egypt, and even since Abram answered God’s call to leave his hometown of Ur for the Promised Land.

But the incidents of xenophobia challenge the Church, in a glaring manner, whether the Church knows what it is, or how it feels to be a foreigner in your own country, to be marginalised from active participation in the economy of your own country and be robbed of your basic human dignity.

Pope John Paul II classified work to provide for your family to be an essential right. That is what our poor are asking of us, and have been doing so since the hopes of 1994 were betrayed.

The wallpaper over the cracks of our socio-economic problems is now being torn off. We have been deaf to the cries of the poor. And like all silently ignored and oppressed people, the poor have now chosen the language of violence, one which no one can ignore, to bring their plight to the fore.

And like all oppressed people, they first go for soft targets, in this case, the foreign nationals. Perhaps when they still feel neglected they shall march to our gated communities and disturb our merriment around the braai fire. What then? Will we cash in our tickets and leave the country?

Martin Luther King Jr said we must learn to live with each other (fairly) as brothers and sisters or perish together as fools. Our government is obviously floundering.

What have we been doing, what are we doing, and what will we be doing?