Pope Francis did nothing surprising when he wrote his encyclical Laudato Si. The Church has been speaking about the environment for a long time. 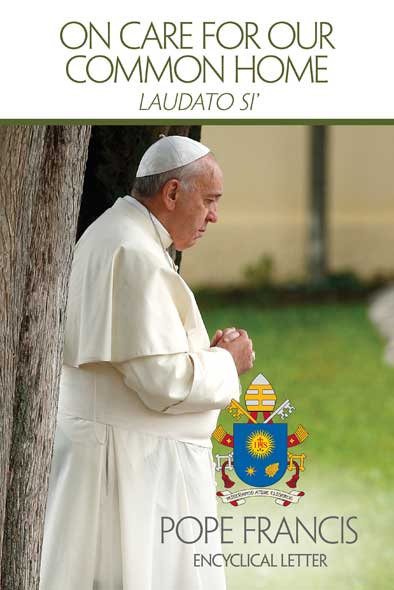 Laudato Si – On care for our common home

That was one of the points Fr Peter-John Pearson emphasised when he recently gave a talk on the encyclical to the Justice and Peace Commission of my parish of Constantia, Cape Town.

Fr  Peter-John Pearson is the director of the Catholic Parliamentary Liaison Office, as well as one of the two vicars-general of the archdiocese of Cape Town.

He registered his surprise at those who claim that Laudato Si’ is an aberration, an “irruption” without pedigree in Catholic Social Teachings (CST).

Then, in 2002, the Pontifical Council for Justice and Peace issued “Ten Commandments for Safeguarding the Environment”.

What is most difficult to most people is the pope’s emphasis on the fact that the cost of the distorted and injured environment has mostly been caused by the rich and borne by the poor.

“The rich have their appetites indulged while the poor have their needs denied,” Pope Francis wrote, linking the environmental crisis to the issue of social justice. The encyclical talks also about the ecological debt of the North to the South.

For those reasons, the pope has no confidence in technological solutions for the environmental crisis, because it is a moral one, and is mostly about “needs” and “greed”.

It is the problem of unrestrained appetites versus unmet basic needs. Instead the pope calls for dialogue as the only way out of the quagmire. He calls for a move towards sobriety and self-restraint, away from the intoxications of consumerism and wanting more and more.

The pope, Fr Pearson said, is turning the Church’s gaze to the reaction of the world during this Zero Hour of transition. “This is not just an age of change; as such, it is a change of an age,” Fr Pearson said.

The great discourses of the era are falling: about racial superiority and Western dominance; gender discrimination and patriarchy; absolutism of technological solution, and so on. Everything is undergoing a seismic change that is opening up new parameters.

Quoting from the book God is Back by John Micklethwait and Adrian Wooldridge, Fr Pearson said the closure of these signs of modernity is opening up room for religion even in the public policy deliberations.

The question is what type of religion will be ushered in: Jihadists with their cruel intolerance? Christian fundamentalists who oppose social engagements? Jewish absolutism with its tragic consequence to others, such as Palestinian people? God forbid!

What is required is the dialogical religion that speaks on equal terms with the world, as Laudato Si’ does.

The gains are clear in the responses: the Muslim world reacted by producing Quran teachings that share common witness with the encyclical. The business world, though strongly opposed to the pope’s message of disusing fossil fuel for renewable energy, has entered into respectful dialogue with the document, pointing out what they regard as shortfalls of the message while promulgating for business as usual through things like carbon trading.

In the end, if we take the pope’s call for going deeper, and not just be content with superficial distractions of convenience that distract us, but allow ourselves to be challenged into deeper synergies, we shall arrive at the point that allows for new paradigms where the future of our planet shall be reborn.

We must not allow ourselves to be discouraged by the daunting task. We need new spiritual insights, coupled with an attitude of gratitude and trust in God and the solidarity of the people of goodwill.