We have the Cure for Blemishes Inside

As I grow older I have become more and more aware of the Catholic Church as a church of sinners. By this I mean that more than many other Churches, the Catholic Church is prepared to admit that Christians are sinful people who have all fallen short of the goodness of God.

This awareness of the sinfulness of humanity was heightened by the head of the Church himself, Pope Francis, who, on being asked who he is declared, “I am a sinner,” adding, “It is not a figure of speech, a literary genre. I am a sinner.”

From the very early times the Church sought to recognise 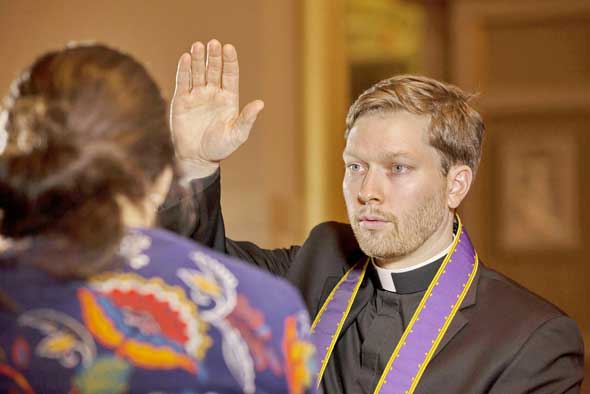 A priest grants absolution during the sacrament of reconciliation. Contrition, confession and penance are the way to conquering sin, writes Emmanuel Ngara. (Photo: Nancy Phelan Wiechec/CNS)

the sinfulness of humanity by establishing the sacrament of confession or the sacrament of repentance. This was in response to Jesus who calls us to repent: “Repent, for the kingdom of heaven has come near” (Mt 4:17).

Through baptism we are cleansed of our original sin, so why do we need to go to confession after baptism?

The short answer is that we are human, and as such we are inclined to sin again, even after we have renounced Satan at baptism, and so we need the sacrament of repentance and forgiveness. But how does this sacrament work?

There is a casual approach to confession: Someone is aware that he has committed grave sins which prevent him from receiving Holy Communion. He goes to confession and lists the sins he has committed: “I missed Sunday Mass three times; I committed adultery twice; I stole a neighbour’s cellphone once.”

This itemisation of sins may be very genuine and may result in forgiveness; but genuine confession requires a lot more than just a recalling and enumeration of one’s sins—it requires interior repentance.

First, we could see the process of confession in this way: It is as if before baptism our bodies are covered with festering wounds of leprosy. On the day of baptism we go to the Pool of Siloam (where Jesus healed the blind man); we are immersed in the waters of the pool and we come out clean.

The wounds and sores are a symbol of internal blemishes on our souls that are caused by our waywardness as sinful humans. To get rid of those blemishes we need to go through a process of internal repentance and reconciliation with our holy and merciful God.

We need to be like the Prodigal Son who remembers that he has sinned against his father and must go back and declare that he is no longer worthy to be called a son, but to be treated like one of the father’s servants.

Inclined as we are to sin again and again, if we are really committed to turning away from our sinful habits, our souls will keep on being cleansed of ugly blemishes, and we will more and more be desirous of establishing an intimate and friendly relationship with God, a relationship which spurs us to desire to avoid sin.