No other newspaper can claim that it has been edited by a future and serving cardinal—except The Southern Cross, in the person of Cardinal Owen McCann. MICHAIL RASSOOL looks at the life of South Africa’s first cardinal. 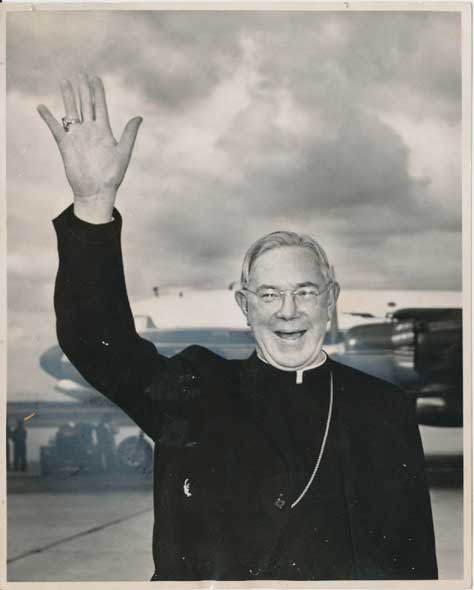 More than 50 years ago South Africa acquired its first “Prince of the Church”, when the archbishop of Cape Town, Cardinal Owen McCann, received his red hat from Pope Paul VI.

Thus The Southern Cross became one of the world’s few newspapers to have been edited by a future cardinal.

In 1986, as a retired archbishop, Cardinal McCann returned to edit The Southern Cross for five years. So South Africa’s national Catholic weekly became the world’s only newspaper to have been edited by a future and serving cardinal.

It is for his service to The Southern Cross that Cardinal McCann was selected as one of the three patrons when the newspaper’s Associate’s Campaign was launched.

In many ways he was a product of his time. He was a much revered figure who embodied the institutional pride of the local Church at a very high point in its history.

Standing at 1,90 metres, “he was a firm and impressive person”, wrote the former Southern Cross editor Fr Bernard Connor OP. “It often took people a while to find the person under a rather gruff exterior. Small talk was foreign to him.”

The timing of his cardinalate was significant, as the Church was then in the apogee of its growth, development, expansion and influence. His archiepiscopate coincided with sweeping changes in South African society.

Apartheid and its unjust laws and practices forced the local Church, and other churches and religions, to take proactive stances. This was also a period of unprecedented expansion for the Church, especially in the archdiocese.

Apartheid group areas led to the establishment of new parishes, in many instances with the cooperation of well-placed helpers such as the Salesian Fathers and Holy Cross Sisters.

Born on June 26, 1907 to Irish immigrant Edward McCann, a building contractor, and his Australian-born wife Susan, young Owen was educated by the Cabra Dominican Sisters at St Agnes’ Primary School.

A proud son of the Church from his earliest days, Owen served as an altar boy, later joined the St Vincent de Paul Society, and continued his Catholic education under the Marist Brothers in Gardens and as a founding pupil of St Joseph’s Marist Brothers College, Rondebosch.

After matriculating at 17, McCann worked for the South African Railways as a clerk while studying part-time at the University of Cape Town (UCT), where he completed a Bachelor of Commerce degree.

Soon after, in 1930, he offered himself up for the priesthood and the vicariate-apostolic, as Cape Town was then, sent him and others to study in Rome to attend the Urban College for the Propagation of the Faith, where McCann also played cricket, another passion.

A keen sportsman, he had played rugby and cricket for St Joseph’s College and became a member of Hamiltons’ under-19 rugby team.

Owen McCann was ordained a priest in Rome’s basilica of St John Lateran on December 21, 1935, returning to Cape Town the following year.

His first appointment was at Holy Cross church in poor, overcrowded District Six, where he assisted his future vicar-general, Fr John Galvin. There Fr McCann founded a Catholic Teachers’ Association and a Catholic division of the St John Ambulance brigade.

In 1939, Fr McCann assisted at St Patrick’s in Mowbray, which then also served the burgeoning Pinelands. From 1940-42, he was secretary to Bishop Francis Hennemann, the “builder bishop”.

Another special ministry was serving Italian prisoners of war. 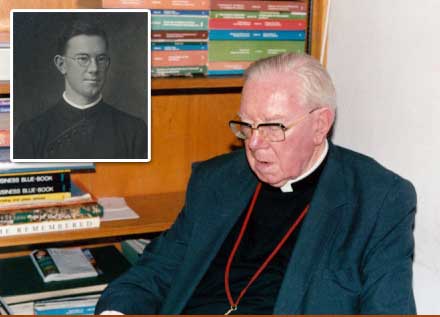 Cardinal Owen McCann during his second stint as editor of The Southern Cross, from 1986-91. Inset: Owen McCann as a seminarian in 1932.

Bishop Hennemann’s ebbing strength led him to step down, and his helper, Fr McCann, was ordained bishop and seventh vicar-apostolic of Cape Town on May 18, 1950—to the surprise of very few.

In January 1951, along with the Durban, Pretoria and Bloemfontein vicariates, Cape Town was elevated to an archdiocese, and the recently ordained bishop became Archbishop Owen McCann.

The next ten years saw the archdiocese’s local Catholic population grow from 33000 to 60000, giving rise to 17 new churches, and efforts to boost priest numbers and find new sources of financial support.

The country’s social and political standing became increasingly fraught, and the future cardinal became “a voice of the voiceless”—a role evident in his statements—opposing, with other denominations and faiths, issues such as the government’s 90-day detention law against opponents and other increasingly repressive security measures.

Several new school buildings went up in Cape Town during his archiepiscopate.

Archbishop McCann’s elevation to cardinal at St Peter’s basilica on February 25, 1965 occurred at a key moment in the life of the Church globally, when the reforming Second Vatican Council (1962-65) was in progress in Rome.

Sources say Cardinal McCann, who attended all of the Council’s sessions, was ambivalent about it at its outset and one of its ardent champions at its end.

During the ad limina visits to Rome, which bishops make every few years to report on their dioceses, the tall, imposing prelate from distant Cape Town made a very strong impression on popes from Pius XII to John Paul II.

Cardinal McCann’s contribution was also recognised by the secular world; he received an honorary Doctorate in Literature from UCT in 1968 and, in 1984, received the Freedom of the City of Cape Town.

Cardinal McCann retired as archbishop in 1984, making way for his former auxiliary, Archbishop Stephen Naidoo. His interest and involvement in Church affairs continued, despite failing health.

He resumed editorship of The Southern Cross in 1986, joined Pope John Paul II on his visit to Southern Africa in 1988 and Angola in 1992, visited the sick, heard confessions, and taught accountancy to night-students at St Francis’ Adult Education Centre in Langa.

Cardinal McCann died at his home in Wynberg on the afternoon of March 26, 1994, and after a well-attended Requiem Mass at Cape Town’s Good Hope Centre was interred in St Mary’s cathedral’s crypt, among episcopal predecessors and his successor, the late Archbishop Naidoo.

In tribute, Nelson Mandela said: “[Cardinal McCann] showed himself to be a man of great ability and wisdom. His opposition to apartheid was always unwavering. He lived a life of service to God and to his people, which is an inspiration to all of us.”

Cardinal Jozef Tomko, then prefect of the Congregation for the Evangelisation of People, said Cardinal McCann had been “endowed with a profound sensus ecclesiae”—the mind of the Church—an apt portrayal of the Cape Town Church’s “most illustrious son”.

n To become an Associate of The Southern Cross, please see the advert on page 13.