Halftime in the Holy Year

We have passed the halfway point of the extraordinary Year of Mercy, and this presents us with a timely opportunity to take stock of the impact the Holy Year has had on our Church, our parishes and, perhaps most importantly, on ourselves. 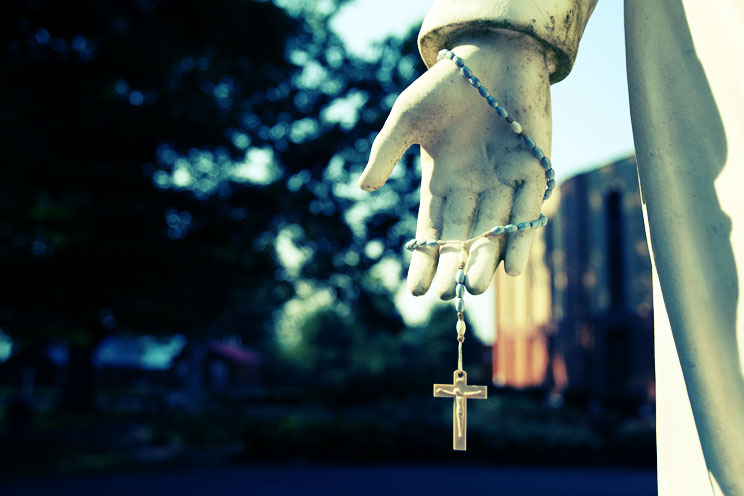 A rosary hangs from a statue of Jesus at the Shrine of Our Lady of Martyrs in Auriesville, N.Y. (CNS photo/Nancy Wiechec)

In doing so, the measure is not really the number of times we have crossed the thresholds of holy doors — edifying though this is — but whether we are experiencing the conversion Pope Francis calls us to.

In launching the Holy Year, the pope had several applications of mercy in mind.

Chief among these, of course, is the mercy of God, who welcomes all who sincerely seek him — even and especially sinners.

The Holy Year serves to remind us that God’s mercy has no limits. This means that the Church’s mercy must be without limits.

Pope Francis wants a Church that understands the situation of people, rather than one that insists rigorously on conformity with the laws and doctrines, even as the pope calls us to submit to the teachings of the Church.

He frequently criticises those who place the law above mercy, as he does in his recent apostolic exhortation Amoris Laetitia.

In this, Pope Francis has Jesus on his side: “Woe to you, teachers of the law and Pharisees, you hypocrites! You shut the door of the kingdom of heaven in people’s faces” (Mt 23:13).

The Church’s primary function is to lead people to salvation through Christ. When the Church fails to welcome even those who don’t live up to the ideals of Catholic doctrine, we “shut the door of the kingdom of heaven” in their faces.

Pope Francis wants those in most need of God’s mercy inside the Church, and he wants the Church’s doors to be open to all, just as Jesus was open to all who sincerely sought him. This means not only the sick, the oppressed, socially marginalised and so on, but all those who sin — and nobody can claim to be exempt from the latter category.

In the gospels Jesus always favours the marginalised—even those whom good people would despise for understandable reasons, such as the tax collector Zacchaeus — precisely because they are in most need of his compassion.

READ  Amoris Laetitia - Time For Us To Grow Up!

At the same time, Jesus is severe on those who have power but don’t use it in merciful ways, such as the Scribes and the Pharisees.

The story of the woman caught in adultery (Jn 8:1-11) is at the centre of the Year of Mercy.

When the Pharisees bring before him the woman caught in adultery, they present Jesus with a challenge: Are you for or against the doctrines of our faith?

Jesus challenges those of them without sin to throw the first stone. Nobody throws the first stone; the prosecution — of Jesus and of the woman — ends there.

When the people are gone, Jesus tells the woman to go and sin no more. What he doesn’t add is: “And if you do sin again, don’t come to me.” Of course, she can come back to him every time she falls, as she inevitably will because she is human — and as we inevitably do, too.

This is central to what Pope Francis is trying to get across: the Church must never cease to include and welcome those who seek it, even if they don’t live up to the Church’s high standards. And it is not our business to judge people, even as we hold views on their actions.

When a person falls — physically, spiritually, morally — our Christian response must be to help them up.

Mercy should not be understood only in terms of power relations but also as a generosity of spirit that makes allowance for the inevitable fact that none of us is perfect and none without sin, and we must respond to that reality with tenderness.

Tenderness, the pope writes in Amoris Laetitia, is a virtue which is “often overlooked in our world of frenetic and superficial relationships”.

In the context of family, Amoris Laetitia calls us to be consciously and deliberately loving, understanding, forgiving and respectful of one another.

And the pope is asking that these same qualities be applied in the Church.