The Church and HIV/Aids in the ’80s

From July 18-22 Durban will host the World Conference on Aids. PADDY KEARNEY recalls how the city’s late Archbishop Denis Hurley was a pioneer in addressing what would become a national emergency, going back to 1987. 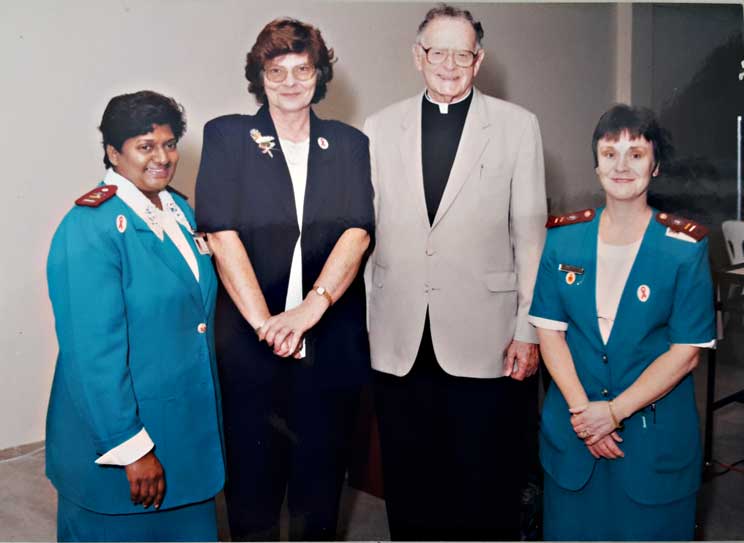 During the 45 years that he was bishop and then archbishop of Durban (1947–92), Denis Hurley took up many social issues, such as opposing all forms of injustices.

In 1987, at the age of 72 he became aware what a huge issue Aids would be for South Africa. Though he was nearing the end of his episcopal ministry, he began to put much energy into ensuring that the Church would play a significant part in preventing the spread of the disease and in caring for people affected by it.

He was alerted to the Aids tsunami about to hit South Africa by Jesuit Father Ted Rogers, an Aids pioneer in Zimbabwe.

By 1987 Fr Rogers was already involved in spreading the message about Aids to clergy and lay people after being asked by the Zimbabwe Catholic Bishops’ Conference to organise a national programme. When he attended the Southern African Catholic Bishops’ Conference (SACBC) plenary session that year, Fr Rogers was invited to address the bishops about Aids.

The person who seemed to be most stirred by this presentation was Archbishop Hurley, at that time president of the SACBC. From what Fr Rogers told the bishops, he realised the huge challenge facing them, and could see what a dramatic response was needed and needed urgently.

He immediately organised a meeting in Durban to begin the process of alerting his diocese to Fr Rogers’ message to the plenary session. At this first Catholic meeting about Aids in Durban, when it came time for questions and comments, Archbishop Hurley noticed that there were two people who seemed most interested in the topic: Liz Towell, at that time working for the Department of Health, and Dr Hermann Schumann, a district surgeon.

The archbishop invited these two health professionals to meet with him as soon as possible to set up a committee that would work out a strategic plan for raising awareness about Aids throughout the archdiocese. Ms Towell suggested that Mike du Preez, a psychologist from Addington Hospital, also be invited as well as her parish priest, Fr Joe Money OMI, who could do spiritual counselling.

“Archbishop Hurley got that meeting going in no time,” said Ms Towell, “and we met at the cathedral.” Others invited included Iris Pillay from Shifa Hospital, Martha Swart from St Aidan’s Hospital, and Mgr Paul Nadal, the vicar-general at that time.

The plan they came up with was first to get the message to deanery meetings from which it could then go on to parish level. At the deanery meetings the committee members were to explain that Aids was a disease, that it would have a big social impact and that people would have to consider their moral and sexual behaviour, as well as to have compassion and sympathy for those who were HIV+ or who had full-blown Aids. The disease was not to be regarded as God’s punishment for sinfulness.

All of this was, of course, rather embarrassing for Church audiences. “You could see it. Everyone was cringing, but never, ever, did Archbishop Hurley cringe,” Ms Towell recalled.

She quite quickly realised that not only medical people should be invited to participate in the archdiocesan Aids campaign, but also people who knew about Catholic moral teachings as well as being eager to work on Aids, and having love and compassion for those who were suffering so much.

The early meetings of the Aids Committee were informal—an opportunity for the members to share with each other what they had learnt about the disease and the most effective ways of spreading awareness and information, and providing care.

Archbishop Hurley was determined to keep abreast of new information about the disease so Ms Towell and Dr Schumann would pass on to him any new scholarly articles they came across. They could see that he had read what they had given him because he would ask for explanations of anything he hadn’t understood.

On subsequent visits, they would learn more from Fr Rogers about what he was doing in Zimbabwe, and share with him their own activities.

In those early days, when Aids was still seen as a “gay plague”, the stigmatisation and rejection of people with Aids was appalling. “It just exacerbated the hideous racial situation of South Africa,” Ms Towell said about how black people with Aids were treated.

Committee members would come back from visits to communities and tell the archbishop what was happening on the ground. He would always encourage them to persevere despite their distress at seeing how communities rejected people who were HIV+.

The message that Archbishop Hurley wanted his committee members to pass on in their contact with sick people was “a message of loving and caring for them. People with Aids were just so shunned, so rejected, so stigmatised that the only thing he wanted us to do was to love them,” Ms Towell said. They were not to judge or preach to people with Aids.

Archbishop Hurley’s attitude to the use of condoms, which were generally frowned on by the Catholic Church, was to encourage the archdiocesan Aids team to decide in conscience what they should do in relation to each case they came across.

“What does it feel like to you?” he would say. “What are you hearing? What is God telling you to do?”

READ  What We Catholics Believe – And Why

When Bishop Kevin Dowling of Rustenburg came under attack for promoting condom usage in situations where one partner in a marriage was HIV+, Archbishop Hurley publicly supported his view.

Ms Towell was also impressed by how much Archbishop Hurley understood the plight of women in relation to Aids. He realised how difficult it was for them to speak to their partners or even to their priests about the moral dilemmas they faced in a patriarchal society. She admired how well informed he was about women’s lack of rights and the obstacles to their becoming empowered.

To do her Aids work for the archdiocese, Ms Towell initially used her own car. Eventually when it was driven into the ground and she had no money to buy another, she went to Archbishop Hurley and said that she would have to give up the work. He immediately contacted Missio, a German funding agency. Within a week, their Aids specialist, Dr Edith Sollider, came out from Germany and drew up a full budget for the Aids Committee—including a salary, equipment and a car. Two weeks later, funding came through from Missio.

Archbishop Hurley made sure all his priests knew about Aids and so he invited Ms Towell to address them on one of their study days.

He encouraged priests to ask questions, saying: “You have to ask everything you need to know here, and I’ve told her [Ms Towell] she has got to be as explicit as possible.”

And so she proceeded to tell the priests in great detail exactly how the disease was spread—and also how it was not spread. “Nobody was looking at me, except for Archbishop Hurley who was sitting right up there next to me, and I thought, ‘Wow! The priests were really uncomfortable. There were almost no questions. Only two young priests raised their hands’.”

Archbishop Hurley urged the priests to weigh up the consequence for any family or couple of the methods they might use to protect themselves from HIV-infection, and that the priests should start talking about these issues and encouraging their people into faithful relationships.

Later on, when he was no longer in office as archbishop and was what he called “acting parish priest” at Emmanuel cathedral, on several successive Sundays he invited Ms Towell to speak at all the Sunday Masses at the time of the homily, urging her to be “100% forthright and accurate about Aids”. He wanted his people to be fully informed about this disease ravaging their communities.

Cathy Madden, who had by this time joined the Aids Committee, helped Ms Towell to prepare what she was going to say in these Aids awareness “sermons”. They included moving stories about the impact Aids was having on families and individuals, and the great struggles of Aids orphans and child-headed households.

Archbishop Hurley was a “hands-on” chairperson especially from 1993 when he was no longer in office as archbishop. He liked to accompany the home-based carers on their visits to the communities. He wanted to see exactly what the situation was like, to meet and pray with people with Aids, speak to their children and other relatives.

In his 80s, he had to be helped to make his way over rough terrain to humble shacks in informal settlements. He composed special prayers for such visits, to bring spiritual comfort to patients and volunteers as well as the families of those affected, prayers suitable both for Christians and people of other faiths.

Archbishop Hurley was acutely aware that “99,9% of our  [home-based care] volunteers were women who already had a huge job in their homes, under very difficult conditions, but were still giving of themselves to help others—and also that they were suffering from the disease themselves and could do very little about it”.

Though the archdiocese could not afford to pay these volunteers for their work, every year they organised two “thank you” events for them—one mid-year and the other just before Christmas. Food parcels would be distributed and, at Christmas, presents for each of the volunteers as well as certificates of thanks.

At the centre of these events was the archbishop, together with Cardinal Wilfrid Napier, delighted to have this opportunity to thank the volunteers and tell them how important they were “in fulfilling God’s plan of providing care for the suffering”.

Archbishop Hurley was also central to the fundraising efforts of what had come to be known as Sinosizo (We help). When people knew he was associated with this organisation it added enormously to their credibility.

He wrote beautiful personalised letters of thanks to each donor, however small their gift might be, and insisted on making personal visits to those local donors who had given major gifts. At the time of his sudden death in 2004 there were still appointments in his diary for visits he was planning to make to such donors.

As we approach the World Conference on Aids taking place in Durban from this month, it is good to remember the pioneering work done by Archbishop Hurley—his emphasis on love, care and compassion for all affected by the disease, the need for accurate information, and the primacy of a well-informed conscience in making decisions in such difficult pastoral situations.

There is much to think about in this Year of Mercy.